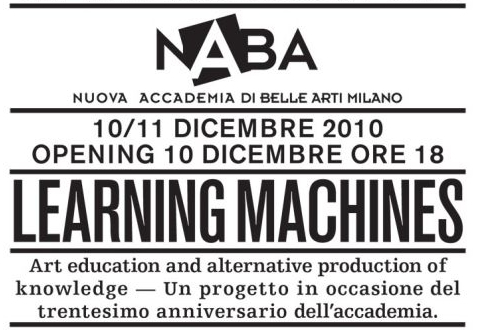 Project on the occasion of the 30th anniversary of NABA

On the occasion of the 30th anniversary, NABA (Nuova Accademia di Belle Arti Milano) – the first private art Academy in Italy founded by artists in order to oppose the rigid structure of the official Academy, organizes and hosts an international project “Learning Machines. Art Education and alternative production of knowledge”. Through a vast number of initiatives this event will not just articulate the past and future of NABA, but will also stem to provide a profound reflection, and open up a discussion on the relationship between art and education, between institutional and non-institutional practices.

What possible relationship is there between art and education during the crisis of modern(ist) and, more in general, Enlightenment apprentice models? If modernist ideology has vilified pedagogy in its relationship with the practice of art, as an impoverishment of art itself, what has become of this relationship, now that the modernist cognitive model has become a thing of the past? What makes this relationship necessary and feasible today? What learning policies can still be adopted? What can we learn from the history of education as applied to that of art? What are the areas they have in common and where can spaces for experimenting new teaching models be found after the Bologna agreement?

The project “Learning Machines. Art Education and alternative production of knowledge” intends to become a meeting point and confrontation platform in order to discuss these and other urgent issues that regard artistic education on a global scale. The title “Learning Machines”, derives from Fluxus movement and in particular from a series of works by George Maciunas. 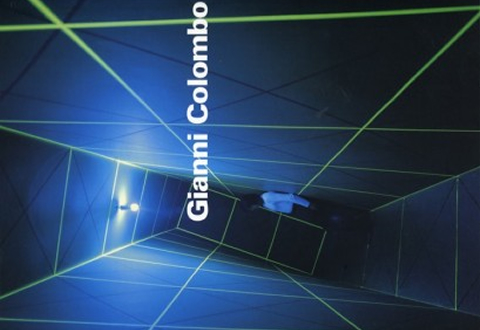 Temporary Library – Reading Room. READING MACHINE is a project by designer Alessandro Guerriero in which a wide selection of publications, catalogues, videos will be available to the public, representing the works of artists and designers that have collaborated with or influenced the philosophy of NABA from 1980 till today.

A publication “THE MANUAL. AN ACADEMY IN 100 WORDS” will collect 100 words selected and drafted by teachers and visiting professors of NABA who, over the last thirty years, have contributed to the introduction of an alternative to the classical Academic model within the Italian realm.