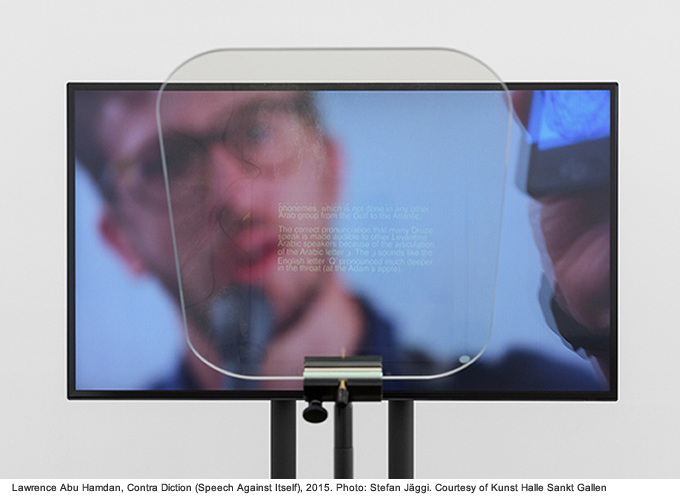 In his largest solo exhibition so far, Taqiyya—The Right to Duplicity at Kunst Halle Sankt Gallen, Lawrence Abu Hamdan examines the voice as a fundamental political instrument, the ways in which it constitutes truth and the place of lying in todays all hearing all speaking world. A new two-channel video installation, Contra Diction (Speech Against Itself), becomes the centre piece of this show and uses the theological, legal, linguistic and philosophical concept of Taqiyya as the thread that ties together the diverse range of works presented here.

Taqiyya is an obscure component of Islamic jurisprudence practised by esoteric Islamic minorities, particularly the religious community of the Druze in Palestine, Syria and Israel. The principle of Taqiyya, which is approximately comparable to the Western concept of diplomatic immunity, allows members of a community to deny their faith or even to commit other illegal acts while subject to persecution or statelessness. Statements made under Taqiyya find themselves within and outside the law at the same time. Between truth and falsehood, Taqiyya thus installs itself as the legal principle that allows to inhabit those spaces inbetween. 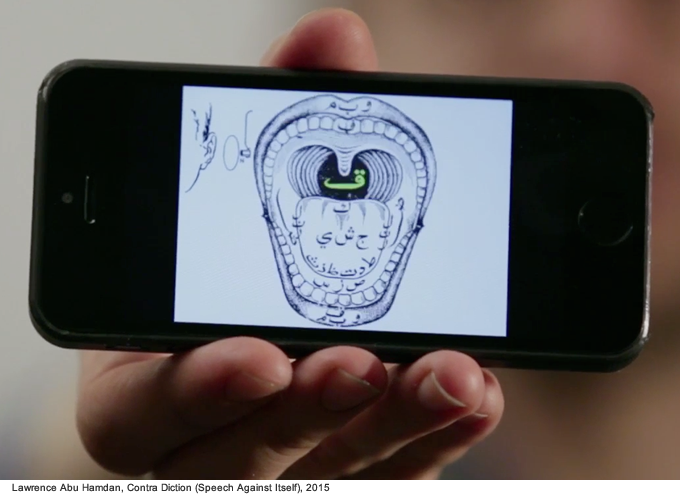 Abu Hamdan’s work, as shown in his St. Gallen exhibition, incorporates a wider range of strategies in order to lay bare the fact that although freedom of speech may persist, the conventions of listening have certainly shifted. The all-hearing state apparatus, which forms the basis of Abu Hamdan’s deliberations, promotes a policy of total transparency which perceives secrecy as the greatest threat to democracy. While radical freedom of speech has come to be a guarantee of a just society, individuals seem to be permanently urged to confess themselves and to bear witness. Between the right to speak and claim for silence Abu Hamdan examines a policy of audibility which increasingly demands new concepts of speech.

Lawrence Abu Hamdan unfolds the underlying concept of Taqiyya in a variety of contexts and aesthetic practises, whether through the work Conflicted Phonemes (2012) – a cartography of accents that exposes the practices of asylum policies, that rely on the enunciation of a single syllable as proof of origin and citizenship – or by exhibiting a private collection of dissimulating colonial paintings. Abu Hamdan seeks to disclose the inherently unfaithful nature of testimony and the impossibility of Western truth production.

Duplicity is the motif Lawrence Abu Hamdan brings us to see and hear in multifaceted ways between documentary and staging, between traditional speech acts and the most recent voice analysis technologies. In terms of Taqiyya he opens up a new understanding of speech, of the unfaithful nature of the voice and its relationship to truth – and in the process questions the fundamental conditions under which we speak, lie or remain silent. 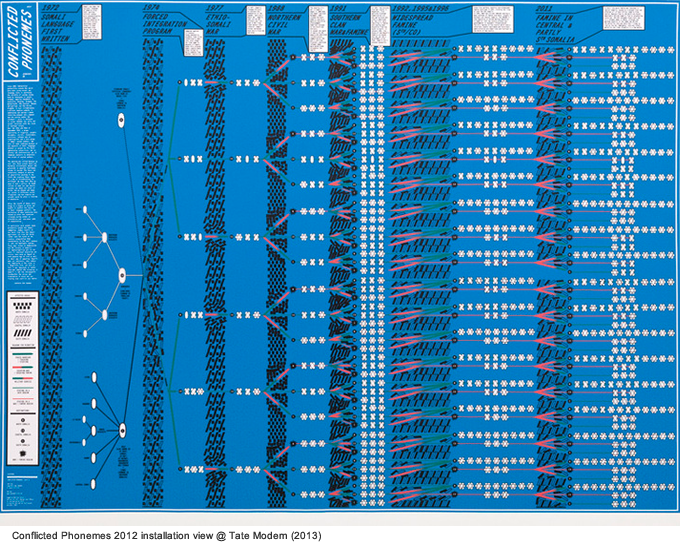 Lawrence Abu Hamdan (b. 1985 in Amman, Jordan) lives and works in London and Beirut. In 2015 he was the Armory Show commissioned artist. His works are part of collections at MoMA New York; Van Abbemuseum, Eindhoven, Netherlands; and Barjeel Art Foundation, UAE. In 2013, Abu Hamdan’s audio documentary The Freedom of Speech Itself was submitted as evidence at the UK asylum tribunal. His forensic audio investigations are part of the research for Forensic Architecture, Goldsmiths College London, where he is a PhD candidate and associate lecturer. Solo exhibitions (selected): Beirut in Cairo (2013); Van Abbemuseum, Eindhoven (2014); Casco, Utrecht; and Showroom, London (2012). Group exhibitions and performances (selected): New Museum Triennial, New York (2015); The Shanghai Biennial (2014); The Whitechapel Gallery, London; MACBA, Barcelona; Tate Modern, London; and M HKA, Antwerpen (2012).