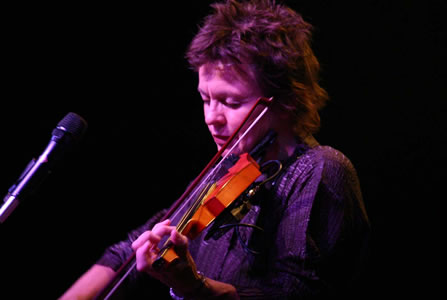 Laurie Anderson will present a special audio-visual lecture exploring the intersections of art, science and creativity.  One of the permier performance artists in the world, Ms. Anderson has consistently intrigued, entertained and challenged audiences with her multimedia persentations.

Anderson’s artistic career has cast her in roles as various as visual artist, composer, poet, photographer, filmmaker, ventriloquist, electronics whiz, vocalist and instrumentalist.  Following her presentation, Ms. Anderson will be joined in conversation by neuroscientist Antonio Damasio, director of the USC Brain and Creativity Institute and a leading researcher of cognition, emotions, and neural systems.

This special presentation is part of the HASTAC In|Formation Year, devoted to twelve months of public programming from a number of universities meant to promote the human and humane dimenstions of technology and to encourage conversation and exchange between humanists, artists, technologists, and scientists.

Recognized worldwide as a leader in the groundbreaking use of technology in the arts, Ms. Anderson has collaborated with Interval Research Corporation, a research and development laboratory founded by Paul Allen and David Liddle, in the exploration of new creative tools, including the Talking Stick.  Anderson has produced numerous albums and touring shows and has worked with artists and performers as diverse as William Burroughs, Arto Lindsay, Andy Kaufman, Ian Ritchie, Peter Gabriel, Perry Hoberman, David Sylvian, Jean Michel Jarre, Brian Eno, Nona Hendryx, Bobby McFerrin, Dave Stewart, Hector Zazou, and Lou Reed.  She wrote the entry about New York for Encyclopedia Britannica, hosted the PBS special Art 21, and received the 2001 Tenco Prize for Songwriting in San Remo, Italy and the 2001 Deutsche Schallplatten Prize for Life on a String.

Currently, Ms. Anderson is touring a new solo work begun during her tenure as the first artist-in-residence of NASA in 2003-2004.  Other recent projects included a new commission for the World Expo 2005 in Japan and benefit performances on behalf of Hurricane Katrina victims.

Professor Damasio is a leading neuroscientist.  His research interests are directed at the neural basis of cognition and behavior at large-scale systems level.  The work is based on MR lesion method, PET/fMRI, and histological mapping of neuropathological tissue.  Major contributions include:

(1) the elucidation of cortical and subcortical contributions to face and object recognition;

(2) the identification of specific neural sites involved in emotion processing;

(3) the demonstration that emotion is covertly implicated in decision-making;

(4) the identification of limbic and brainstem sites of pathology in Alzheimer’s disease.