The material concretization of scientific principles

Some designers and artists have the purpose of translating scientific principles connected to the relationship between artificial and biological through 3D objects, that can be used as material “concretizations” which crystallize phenomena and knowledges, difficult to translate in 2D devices. These are newly conceived objects which represent new data and needs. An emblematic example is represented by the customized jewels resulted from parametric generation started from the DNA of a user, representing a recent demand of conceiving and perceiving one own’s identity, univocal and recognized by science.

The challenge of concretization of science is fascinating precisely because it aims to materialize concepts and processes, through a three-dimensional, often multi-material, multi-sensorial and multi-modal snapshot. Snapshot that can be very accurate, therefore useful as a teaching or dissemination tool – to make visible structures, phenomena and processes that are difficult to visualize – or can provide a more personal and filtered interpretation of expressive, aesthetic or conceptual intents.

The progress of knowledge on communication systems used by biology at a cellular and molecular level, which allows biological systems to interact and self-organize, lead artists and designers to consider analogies between biological life and the digital universe. 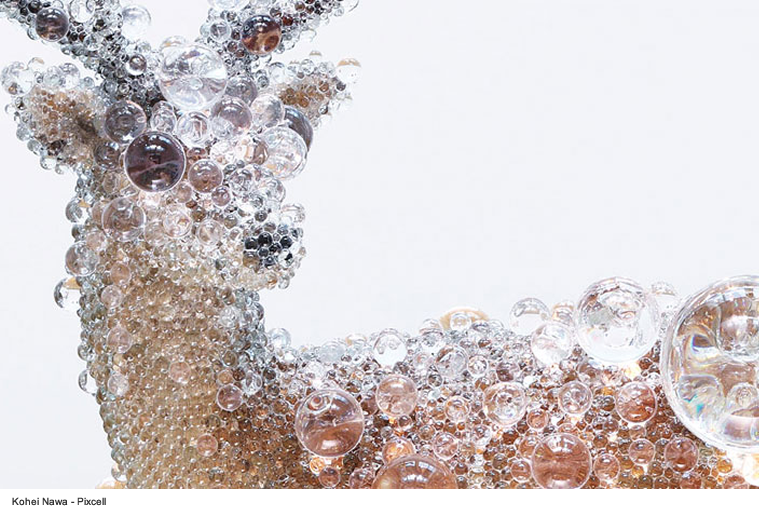 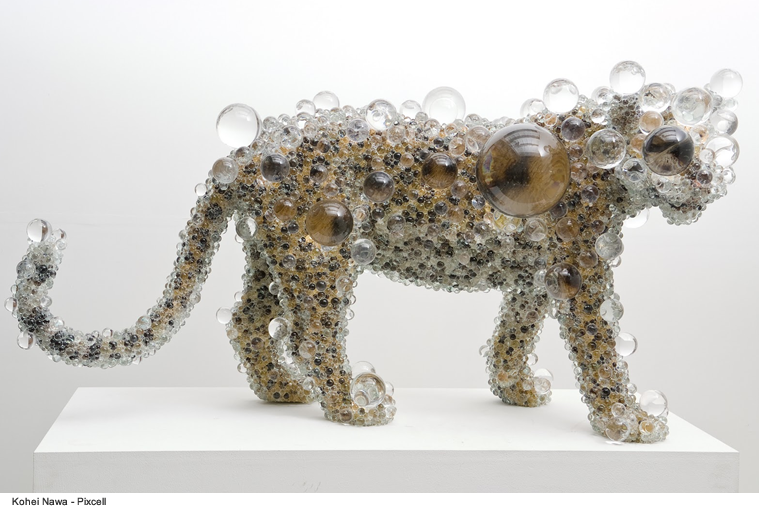 Starting from the observation according to which each form of life is made of cells which contain genetical information, just like pixels which compose a digital image, the Japanese artist Kohei Nawa coined the neologism PixCell, born from the integration of pixel and cell, hinting at the correlation between digital and biological. The sculptures and the installations proposed by Nawa in the PixCell series contain physical objects covered by a layer of glass bubbles which remind of physical pixels which alter the visual perception of the object, multiplying fragments and details through different interactions with light. Just like any cell is an individual element containing the entirety of the genetical information of an entire organism, the transparent cells which cover Nawa’s stuffed animals reflect multiple elements of the body and of the environment which contains them, bringing to mind the third principle of complexity introduced by Edgar Morin: the hologrammatic principle “ Not only is it part of the entirety, but the entirety is in the part” [1].

Even in the project Foam, the artist dives in the biological phenomena which constitute life by building foam sculptures made of tiny bubbles, again cells, that, just like a live and changing system, modifying continually the image of the entire installation as much as of the detail. The bubbles cannot escape the cycle of birth, life, transformation and destruction, which is not different from the way in which our cells function through metabolic systems. Matter becomes then a language through which it is possible to translate scientific logics and principles. In order to do this, the artist Must have access to specific scientific knowledge and control dynamic processes which characterize different materials. Manifold, instead, is a massive sculpture created by suspending in space some spheres, plastically deformed as if they had been subjected to the effect of multiple action of gravity from different directions. The work is based on the relationship among physical phenomena, matter, and energy. 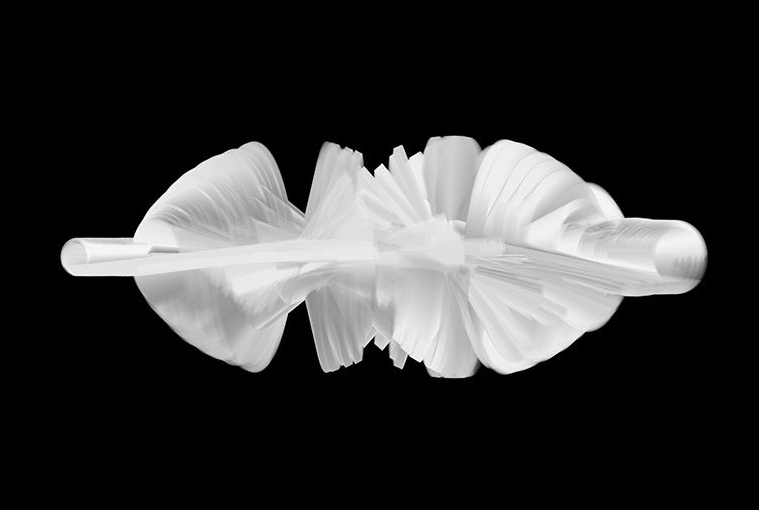 Knowing the logics underpinning biology allows to use nature itself as raw material or as a conceptual tool. Another interesting example of material concretization of natural phenomena Synthazards by Syntfarm, started in 2009, which translates into physical objects natural catastrophes using digital modeling and production tools. Earthquakes, draughts, seaquakes, lightnings, volcanoes, tsunamis, tornadoes, eruptions, are expressed through algorithms compatible with prototyping machines. The primary concept of the projects is that natural hazards scare humans because they lack systems of emergency management and planning, which translate, politically, into severe financial, environmental, and very often also human, losses. The entity of the damages sometimes depends upon the ability of humans of preventing disasters. The project Synthazards models the processes in the moment in which the most dramatic environmental changes occur, expressing at the same time the beauty and the force through generative algorithms, prototypes, and figurative experiences, so to render them more easily understandable by people and in particular by those who operate in the field of urban planning for prevention.

New technologies offer new opportunities for interaction between design and science and new professional scenarios such as modeling and 3D printing of anatomical parts for medicine, i.e. for teaching, demonstrative activities or simulating procedures and results of surgical operations in areas such as plastic surgery or cardiology. Software like Osirix provides three-dimensional models, ranging from radiographic images (TAC or RMN), which can be manipulated with the usual design tools at the service of medicine.

An example of 3D concretization that represents the physiological functioning of a complex biological system is the 3D model of a pig’s eye, from a computed tomography, which allows to visualize, to an easily perceptible dimension, the pupil and blod vessels in the smallest details, which in real scale have small size up to 20-30 micrometers. The model was developed by an interdisciplinary team in Switzerland, coordinated by Peter Maloca, an ophthalmologist, whid Christian Schwaller, a visual artist specialized in 3D modeling and printing that was assisted in the technical production by engineer Sébastien Barré. 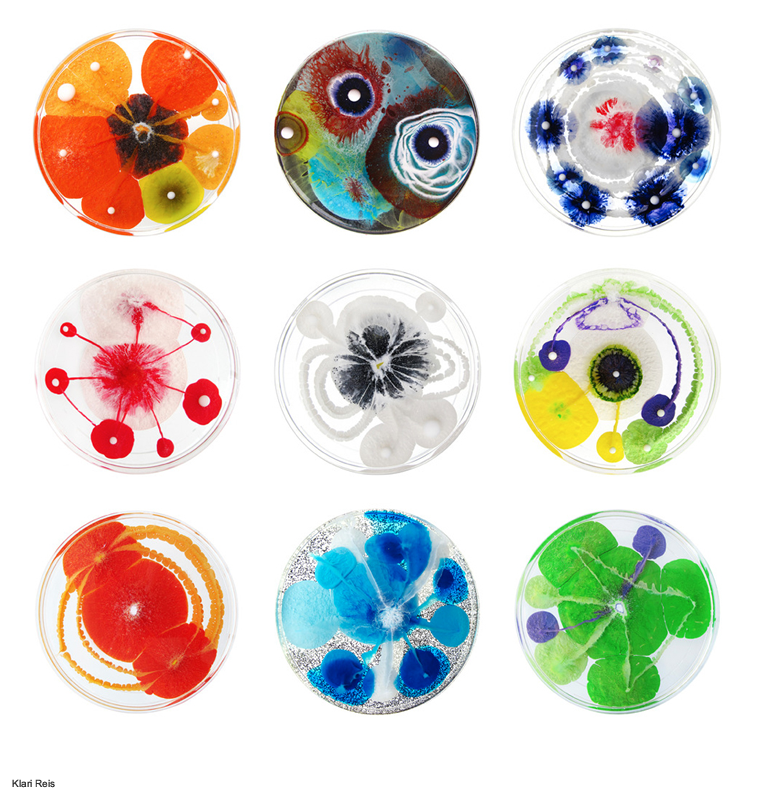 More often, inspiration to science has an aesthetic-formal foundation. Klari Reis, Californian artists, fascinated by molecular biology and the most frequent daily activity of molecular biologists consisting of microscopic observation of bacterial cultures or cells in transparent containers called Petri Dishes, conceived the collection The Daily Dish 2013. Every day of that year the artist decorated a Petri Dish with polymers, dusts, reflecting resins in layers and according to morphologies inspired by biology. Reis, with this collection, intends to communicate the regularity on which the work of molecular biology is based: they have to observe the tiniest changes which happen in their cultivation without interrupting their monitoring activity, not even for a few hours. At the same time the chromatic and morphological variety represents the multiplicity of possibilities of replication, growth, self-organization of cell structures undergoing stimuli like the action of medicines, nutrients, or other biological, chemical, or physical inputs.

The titles of the first one hundred paintings inspired by her observations on modifications of human blood cells are names of active principles. The artist started this work by painting on canvas, wood, and aluminium the way in which cells mutate and duplicate according to the substances they come into contact with, to then switch to the Petri Dishes and realize more and more abstract works. 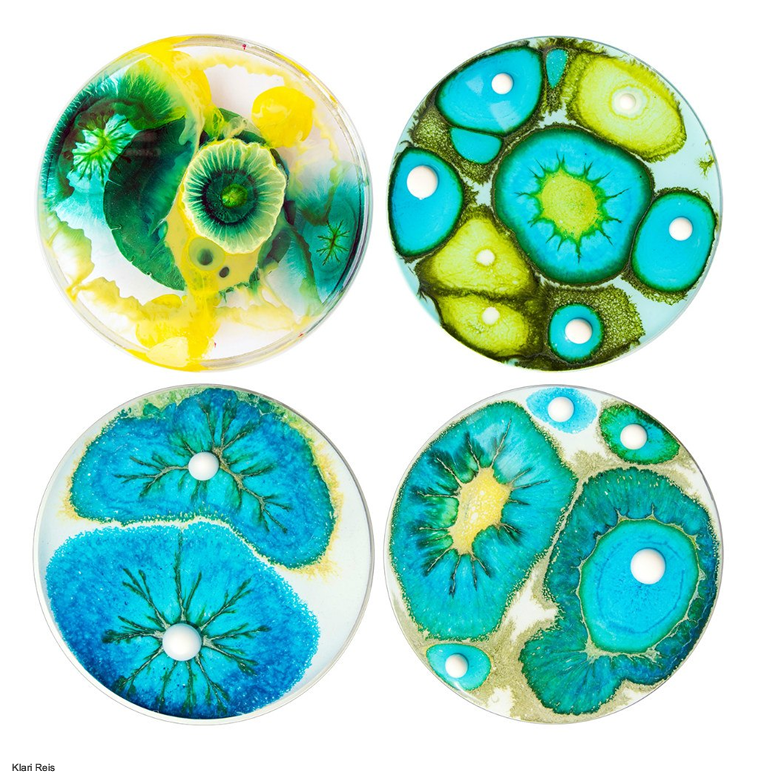 In the last case the reference to science is enough vague and distant: the artist didn’t choose to deepen her knowledge on the processes of cell cultivation which inspired her, but she just observed them on the surface without looking for a hybridization of disciplines together with scientists. She chose to represent one specific conceptual aspect, that is: the rigor and the regularity which are expected by a scientist, which are probably in contrast with the life of many artists.