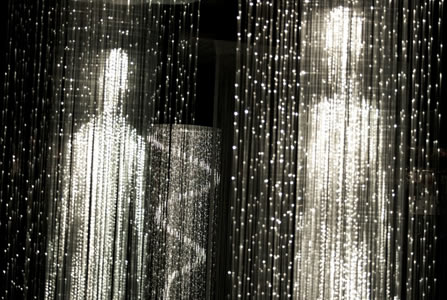 A family of holographic light beings, sculpting and drawing robots, an orchestral milk float, a giant vertical electronic wave and a special feature exhibition of work from the masters of kinetic art and the groundbreaking Cybernetic Serendipity show, are just some of the incredible exhibits at Kinetica Art Fair 2010. Kinetica Art Fair takes place from 4 – 7 February 2010 at the P3 space in London and is the UK’s only art fair dedicated to kinetic, robotic, sound, light and time-based art. Art that has a life of its own, talks, workshops, performances and more create an art fair like no other.

Kinetica Art Fair 2010 developed by Kinetica Museum will take place in P3’s unique 14,000 sq ft underground former concrete testing facility opposite Madame Tussauds on Marylebone Road. Over 25 galleries and organisations specialising in kinetic, electronic and new media art are taking part and over 150 artists exhibiting. Tickets start at £8. Work ranges in price from £50 – £40,000. The UK’s first Kinetica Art Fair, run by Kinetica Museum in 2009, attracted over 9,000 people with work sold to visitors, collectors and galleries around the world.

Kinetica Museum in conjunction with John Dunbar (Indica Gallery 1965) and Jasia Reichhardt (Cybernetic Serendipity, ICA, 1968) will be curating a feature exhibition dedicated to the pioneers and Masters of kinetic art. Many of the pieces will be on loan from private collections and will feature the work of: Jean Tinguely, Roger Vilder, Peter Logan, Yaacov Agam, Peter Sedgely, Liliane Lijn, Takis, David Medalla, Jesus Raphael Soto and more to be announced soon.

Also on display will be original interactive installations from the 1968 exhibition of cybernetic art Cybernetic Serendipity such as Rosa the Robot, by Bruce Lacey and SAM (Sound Activated Mobile) by Edward Ihnatowicz. Dianne Harris, Art Director and Curator, Kinetica Museum, said: “For both the collector and the first time visitor, the Fair will provide an opportunity for everyone to enjoy and understand more about this thriving international movement, participate in talks, workshops and performances. “We are bringing together work from some of the world’s greatest Kinetic artists and exhibits first shown at the seminal Cybernetic Serendipity show from the ICA in 1968. These pieces shown alongside contemporary kinetic, electronic and new media works create an art of universal knowledge pushing the boundaries of many disciplines across the arts and sciences, collectively demonstrating a new wave of experiential art”. “

Kinetic art is art that has a life of its own. Pioneered by world famous artists including Maholy Nagy, Jean Tinguely, Marcel Duchamp and Alexander Calder during the 1900s, modern contemporary kinetic and electronic artworks utilise and warp technology itself, to explore, nurture and comment on our evolutionary processes and challenge scientific and universal exploration. 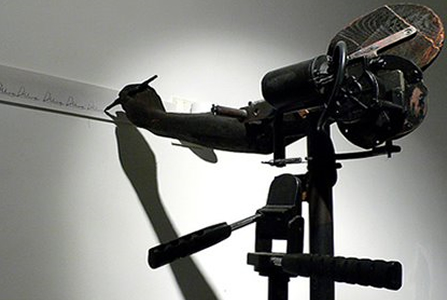 Artists exhibiting at the Kinetica Art Fair 2010 include:

Rosalie de Thélin uses light as a medium and a subject to create sculptures and installations to explore life and illusion. For the Fair, she will create a family of holographic light beings inspired by astronomy, scientific theories and quantum physics. Andrew Stonyer explores colour, movement and the division of time in a dynamic installation entitled Timepiece. The sculpture explores the patterns of time that exist within the hour and significantly how they are revealed through seconds, minutes and the quarterly divisions of the hour.

Ben Parry creates kinetic sculptures using reclaimed materials. A fully charged 1975 Milk Float and the junk of the city undergo a metamorphosis to become an orchestra of discord through a series of interlocking kinetic sculptures which create a reverberating cacophony of motors, pulleys, wheels and cogs. The milk float will tour London before arriving at the fair. Patrick Tresset and Frederic Fol Leymarie take the 30,000 year old practice of artistic drawing and sketching and use sophisticated computational simulations to enable machines to recreate some of the identifiable perceptual and cognitive processes involved in face sketching by artists.

The Kinetica Art Fair 2010 will also be teaming up with Pachamama Forest to conduct a joint exercise that will allow for the calculation of Fair’s carbon footprint and the development of a carbon compensation strategy. Pachamama Forest’s team will be monitoring the energy and electricity consumed throughout the duration of the fair, and estimating the emissions generated from visitor commuting to and from the fair. Pachamama Forest will then provide Kinetica Museum with a reforested plot of land in its tree plantation in Finca La Ponderosa Colombia as part of the carbon footprint compensation strategy. This will reduce Kinetica Art Fair’s environmental impact and diminish its contribution towards climate change.