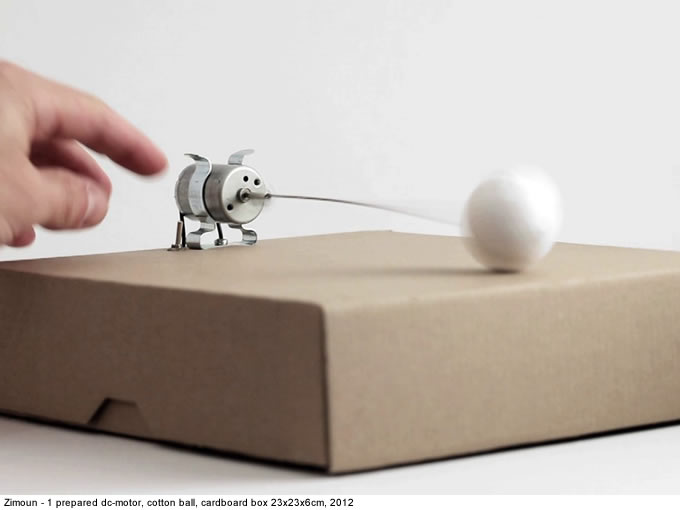 bitforms gallery is pleased announce [KE]^3, a series of three collaborative solo exhibitions in New York that feature kinetic sculpture by Swiss installation artist Zimoun. The project marks Zimoun’s second solo exhibit in the gallery, and his first in its new Lower East Side location.

With an extreme sensitivity to location and rhythmic potential, Zimoun produces works that evoke control, humor, absence, and nature. Highly ordered systems of movement are derived from simple and low-tech means. His projects can easily be compared with mathematical formulas or a science experiment, as he deploys wit and a keen observation of space and sound. In this spirit, [KE]^3 is a series of exhibitions that takes artistic license in considering “KE”, a notation found in physics equations describing kinetic energy.

The three concurrent exhibitions by Zimoun are individually titled in a way that methodically reflects the physical components assembled at each location. Essentially, his titles summarize the raw materials prepared for any given project’s mechanical system. For example, the listing of materials in his title for the bitforms gallery exhibition addresses a specific set of sculptures that Zimoun will be presenting. These 12 pieces are radically reductive in format and will be making their debut in New York. 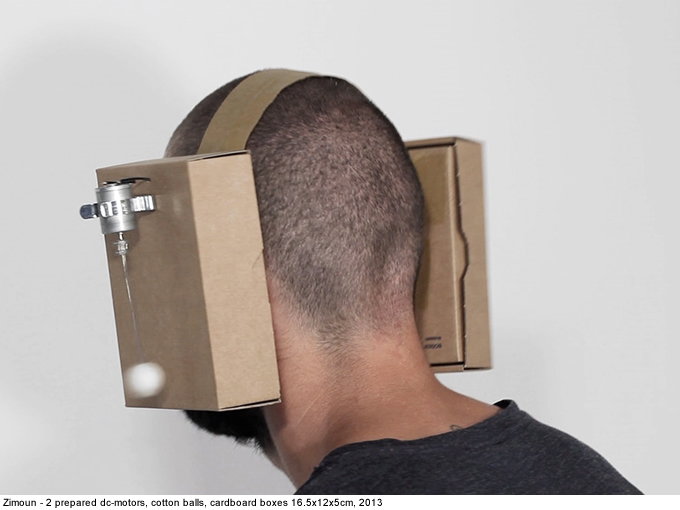 At the center of Zimoun’s practice is study of vibrational microstructures. His work explores the mechanical rhythm and flow of prepared systems. Both sonically and visually, units of pulsing activity form the basis of his compositions, whose timing and contours are determined site-specifically. Blank zones of play are constructed, and set into motion by the elements of gravity, resistance, chance, and repetition. In his sculpture and installations, scale becomes a tool of amplification or visual multiplication, as he adapts each system to a particular context.

At Knockdown Center in Queens, Zimoun is building a newly commissioned immersive environment of 250 motorized wood beams and ropes. Each unit will cyclically strike the floor, producing a sonic experience reverberating within a 10,000-square-foot atrium space with 40-foot ceilings. Unveiling on Saturday, February 7, the installation marks Zimoun’s largest site-specific project in the US to date. On opening night, Zimoun will also present a rare live performance that will inaugurate a new series of cross-disciplinary programming at Knockdown Center responding to its unique architecture and history.

Exhibited widely in Europe, Zimoun is best known for his construction of sonic sculptures, or “architecturally minded platforms of sound.” Recently interviewed by Space magazine in Korea, Zimoun explained his thinking on installation art as follows: “What I call ‘sound architecture’ signifies a space of entrance, but also a sound composition that functions more like an organism, something that is not changing into something else over time, but rather is full of variations in its details, and potent in its sonic possibilities. It’s not about a beginning or end; it could even be endless. It’s not narrative. It’s not going somewhere, and not coming from anywhere – even if it is continuously changing in its microstructures. It is more about creating a situation and focusing on the vibrations happening at the current moment. It’s about creating a simple system, which then gains dynamism, becoming richer in its behavior. So in that sense, time is informing these ‘sonic architectures’ in a very different way than that of conventional musical composition”. 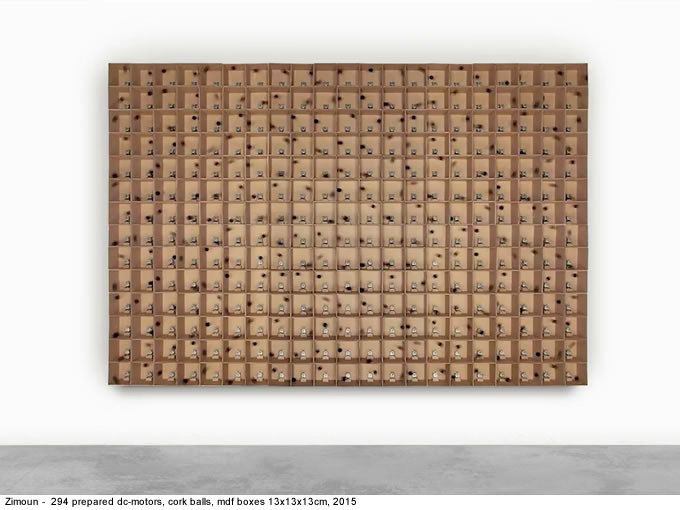 Furthering the logically rooted considerations of his practice, the Simons Center for Geometry and Physics is featuring Zimoun’s work in an exhibition at Stony Brook University in Long Island. On view will be a selection of videos, and two sculptures entitled 150 prepared dc-motors, filler wire 1.0mmand 25 prepared dc-motors, cotton balls, cardboard boxes 50x50x50cm.

Part of Stony Brook University, The Simons Center for Geometry and Physics a research center devoted to furthering fundamental knowledge in mathematics and theoretical physics, especially knowledge at the interface of these two disciplines.

Built in 1903, Knockdown Center is a 50,000-square-foot former door factory dedicated to presenting cultural events and exhibitions that respond to its unique architecture and dimensions.

bitforms gallery was founded in 2001 and is devoted to emerging and established contemporary artists who embrace the visual discourse of new media culture.