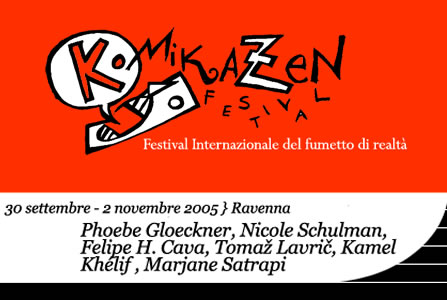 On Friday 30th September at 6 p.m., the Mirada Association in collaboration with Ravenna’s Local Authority for Youth Initiatives will present Komikazen, the first International Festival of reality comic-strips, hosted by the city of Ravenna at three different sites: the “Museo d’Arte” of Ravenna; “Almagià”, the former sulphur factory; and the “Centro Giovanile” in Via Chiavica Romea.

After the success of exhibitions entitled “Per Ventiquattromila baci: fumetti dall’altra Europa”, “Joe Sacco: Nuvole da oltre frontiera”, and “Marjane Satrapi ovvero dell’ironia dell’Iran”, that centred narration around real life accounts, the Mirada Association wanted to provide the public with a greater opportunity to make contact with, and get to know, the most internationally important authors to recount reality through words and pictures.
The Festival, the first of its kind on an international scale, is arranged by Gianluca Costantini and Elettra Stamboulis and will last three days, while the planned exhibitions will be open to the public throughout October. At MAR (the Office for External Relations and Marketing), there will be an exhibition of original storyboards from the winners of the International Competition La Battaglia di Algeri: racconto a strisce di una storia in bianco e nero as well as the works of authors already established in their respective countries, such as Phoebe Gloeckner, Nicole Schulman, Felipe H. Cava, Tomaž Lavric and Kamel Khélif.
The festival will intersect with other methods of communication, such as journalism and photo-reportage, thanks to the collaboration of the magazine “Internazionale”, a partner in this project.
The festival will above all, however, be an opportunity to meet the guest authors, including Marjane Satrapi and Joe Sacco, who will both meet the public. The show will also offer associated workshops for school groups relating to autobiographical comic-strips.

Phoebe Gloeckner : a reader at Michigan University, USA, is known in Italy for the now impossible-to-find “Vita da bambina” (Topolin Editions), an autobiographical account of domestic violence. Gloeckner has produced many comic books and has worked with authors such as James Graham Ballard; Robert Crumb is one of her fans.

Nicole Schulman: a young American designer, linked to the noglobal movement and to the alternative American scene, she collaborates with the World War III collective. Schulman designs posters, tattoos and illustrations for the political performances of activists and is characterised by her xylographic sign and strong interest in social issues. Together with Paul Buhle, she created Wobblies, a book about the history of American Trade Unions. Her work has been published in Italy in the magazine “InguineMAH!gazine”.

Kamel Khélif: the work of this French-Algerian writer has been printed by publishing houses such as France’s “Fremòk”. The stories, of a very pictorial nature, are all linked to the transverse theme of the search for identity by “those born in other people’s countries”. The sense of exile and of belonging is portrayed through short scenes set in the cities of provincial France and Algeria. These stories are a tribute to the lost youth of these countries and a homage to the nostalgic beauty of memory. He is, as yet, unpublished in Italy.

Felipe H. Cava: a Spanish scriptwriter (also of film), he has worked with many writers, including Raul. Cava is known abroad particularly for “Berlin ’31” and “Ventana a Occidente” (unpublished in Italy), and he also coordinated the editorial initiative 11 Marzo, created by a group of Spanish scriptwriters, and concerning the railway attacks that led Spain to withdraw from Iraq. During the 70’s he was part of the political-creative collective known as El Cubri.

Tomaž Lavric alias TBC : a Slovenian writer, he is known in Italy for Racconti di Bosnia (Magic Press Editions), that won various international prizes for best comic book, Tempi Nuovi and La Fuga di Lucertola, by the same publisher. He also created Il Decalogo IV for Panini comics. Lavric uses pictures to tell stories that describe his country as it reaches a junction between the past and the present, from a disenchanted and pitiless viewpoint.

Guests at the festival will include Joe Sacco , a reporter who draws comic strips regarding conflicts such as those in Bosnia and Palestine, and also an observer of the American internal political debate (published recently by “Internazionale”), who has already exhibited in a solo show organised by Mirada at the Museum in 2001, and Marjane Satrapi , an Iranian comic-stripwriter, of French adoption, known in Italy particularly for Persepolis, which was also published as a comic book supplement to the daily newspaper “Repubblica”.