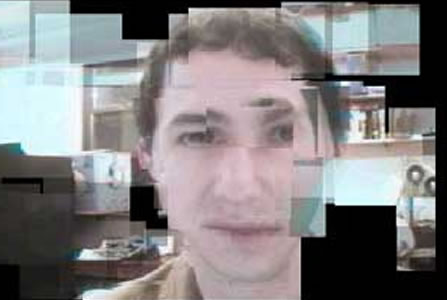 Jonah Brucker-Cohen will discuss his work in the theme ofÂ “Deconstructing Networks”Â in both physical and online instantiations. He will discuss his projects that attempt to challenge and subvert accepted notions of network interaction from software manipulation and rule-based systems to translating virtual processes and conventions into the physical world. Some projects he will discuss include BumpList, an email community for the determined, Alerting Infrastructure!,Â a website hit counter that destroys a building, PoliceState a fleet of radio controlled policecars who’s movements are dictated by keywords sniffed on a local network, and SimpleTEXT a performance that is controlled by participants through texting messages from their mobile phones.

Jonah Brucker-Cohen is a researcher, artist, and Ph.D. candidate in the Disruptive Design Team of the Networking and Telecommunications Research Group (NTRG), Trinity College Dublin. He is co-founder of the Dublin Art and Technology Association (DATA Group) and a recipient of the ARANEUM Prize sponsored by the Spanish Ministry of Art, Science and Technology and Fundacioin ARCO. His writing has appeared in numerous international publications including Wired Magazine, Rhizome.org, and GIZMODO and his work has been shown at events such as DEAF (03,04), UBICOMP (02,03,04), CHI (04) Transmediale (02,04), ISEA (02,04), Institute of Contemporary Art in London (ICA-04), Whitney Museum of American Art’s ArtPort (03), Ars Electronica (02,04), and the ZKM Museum of Contemporary Art in Karlsruhe(04-5).

Art Clay will perform will present short film clips, shown as important examples of the collaborative processes between varied fields of knowledge, and between two or more genre. Particular attention will be given in the lecture to the sonic art work GoingPublik for distributed ensemble. This work is characteristic of a working relationship between the Arts and the Sciences which not only results in hybrid art forms but also brings about hybrid areas of knowledge. Other works to be discussed are Le Marriage, LoveGas, SurÃ©ance, GoingPublik, and Spinoza is(s)tâ?¦

Art Clay was born in New York, and lives in Basel, Switzerland. He has worked in Music, Video & performance, specializing in the performance of self-created works with the use of intermedia. He has had appearances at international festivals, on radio and television in Europe, USA and Japan. He has written works for newly-invented instruments of his own design and for traditional acoustic and electro-acoustic instruments. Instrument designs include: a virtual string instrument; an optical sound generator; and a controller for both sound and image.