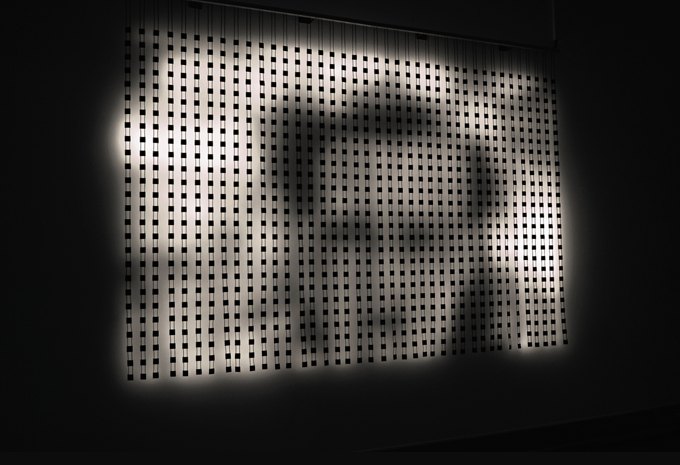 Jim Campbell: Rhythms of Perception is the first solo museum exhibition in New York of the San Francisco-based artist Jim Campbell (b.1956), who is best known for his evocative low resolution works.

This career-spanning exhibition features over 20 works, ranging from early experimental film, interactive works, and low-resolution videos to large-scale installations. An innovator in the use of technology, Campbell integrates and manipulates computers and custom electronics into visually arresting artworks.

The exhibition highlights the diverse scope of Campbell’s career, featuring an installation from his iconic series Exploded View, in which moving images—depicting birds, runners, and commuters—only become decipherable from a privileged vantage point; his low-resolution artworks including Home Movies (pictured), a large-scale grid of LEDs depicting Campbell’s own home movies, and Motion and Rest.

Also on view will be a never-exhibited new work—a digital self-portrait—and the rarely shown Last Day in the Beginning of March, which features 26 suspended light bulbs accompanied by a soundscape that evokes the last day in the life of the artist’s brother.

Jim Campbell: Rhythms of Perception is organized by guest curator Steve Dietz, Founder and Artistic Director of Northern Lights.mn.  This exhibition is made possible with generous support from Ann and Andrew Tisch and anonymous donors.