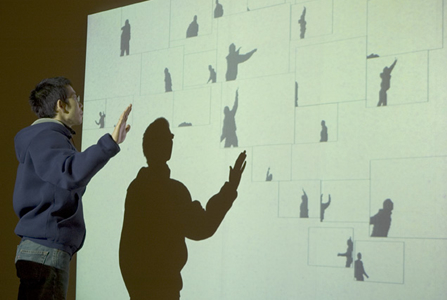 Scott Snibbe will present recent works that explore interaction between cinematic projections and viewers bodies along with his most recent work, “Blow Up,” which amplifies human breath as a large field of wind.

He will discuss the philosophical divide between language and visceral perception that motivates his creation of interactive media art. Working with technologies at the forefront of contemporary research including computer vision and synthetic touch, Snibbe explores how a minimal intrusion of technology can provide insight into the nature of observer’s minds and their sense of self. Works shown will range from large-scale body-centric physical installations to interactive sculpture and screen- and web-based interactive graphics.

Scott Snibbes work has been shown internationally at venues including the Whitney Museum of American Art’s Artport and The Kitchen, New York City; the InterCommunications Center, Tokyo; Ars Electronica, Austria; and ICA, London. He has taught at several prominent American academic institutions and held research positions at Adobe Systems and Interval Research. Snibbe lives and works in San Francisco.