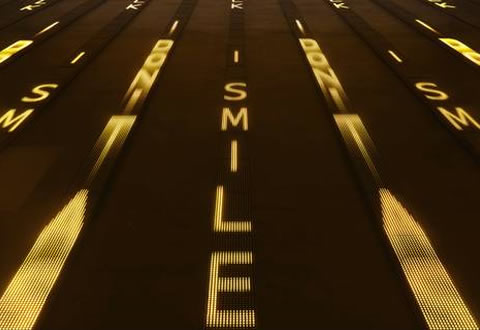 For more than thirty years, Jenny Holzer’s work has paired text and installation to examine personal and social realities. In this exhibition, which centers on her work from the mid-1990s to the present, Holzer fuses political comment with formal beauty.

Using language as her principal medium – either printed on posters and T-shirts or scrolling on LED (light-emitting-diode) displays – Jenny Holzer’s text-based art provides a range of opinions and voices while addressing the interplay between the public and the private. Appearing in both museum exhibitions and more anonymously in the public realm, her work is also presented as dematerialized and somberly majestic nighttime projections on buildings and in natural settings, including crashing ocean waves.

Part oracle and part provocateur, the viewer must sort the profound from the prattle in Jenny Holzer’s texts. Her incisive and premonitory pronouncements, which are condensed, filtered or distilled from the culture at large, bear witness to social and interpersonal conflict, the body politic and the body, while relentlessly exposing the machinations of the military/commercial/entertainment complex.

Her analysis continues in the presentation at DHC/ART with recent LED works and silkscreen paintings based on declassified US documents and the US-led invasion of Iraq. Using transcripts of policy debates, as well as testimonies of American soldiers and detainees in US custody, the exhibition features Redaction paintings, which refer to documents government censors have partially or totally blacked out – redacted – because the subject matter was deemed too sensitive for public consumption.

Lying flat on the floor of a large room and gathering extracts from all of Jenny Holzer’s own writings, the massive LED work For Chicago – a dazzling, immersive installation of parallel lines of pure pulsing light and endlessly scrolling texts – is perhaps the centerpiece of the show. More quietly, but not less powerfully, human bones are laid out like artifacts and specimens on the two Lustmord Tables with text engravings detailing the rape and murder of women from the perspectives of victim, perpetrator and witness. 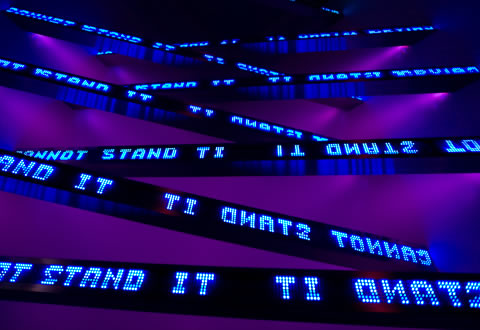 Consistently issue-based, narrative and experiential, Jenny Holzer (b. 1950) has created an important, singular and politically relevant body of work. Born in Gallipolis Ohio, she currently lives and works in Hoosick, New York. After completing her MFA at Rhode Island School of Design, she attended the Whitney Museum’s Independent Study Program. She was the first woman to represent the United States at the Venice Biennale, where she also won the Golden Lion. Her work is in major museum collections around the world.

ADDRESS is an art education project inspired by the exhibition JENNY HOLZER, presented at DHC/ART from June 30 to November 14, 2010. Participants will create a postcard based on the theme of social engagement. Text is central to this project and the challenge is to express an idea in a one word or concise phrase, which may motivate the participant to take a poetic approach. In reference to themes explored by Jenny Holzer, the participant will call up and reflect upon a socially engaged observation inspired by a point of view on culture or a point of view on society. During the closing reception, participants will be invited to address a card and to go as a group to a selected mailbox where each card will be deposited as a symbolic gesture. This happening will be documented on video.

Jenny Holzer is co-organized by the Museum of Contemporary Art, Chicago, and Fondation Beyeler, Riehen/Basel, Switzerland and was curated by Elizabeth Smith with the participation of Dr. Philippe Büttner, Beyeler Museum. Major support for Jenny Holzer is provided by Donald and Brigitte Bren, Anne and Burt Kaplan, The Andy Warhol Foundation for the Visual Arts, and the National Endowment for the Arts.