Jasmina Cibic The object of the spectacle 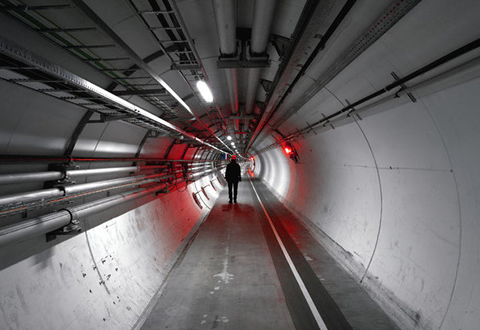 Jasmina Cibic is a representative of the younger generation of Slovenian artists whose work has consistently continued to develop a recognisable language of its own (both in terms of form and content) from very early on.

Despite the fact that her projects are conceived as some type of gesamtkunstwerk, they are usually perceived via a complete and final photographic image. However, this is only a part of her working process. This exhibition entitled “The Object of the Spectacle” seeks to distance itself from and deconstruct the final photographic image into the individual elements that are usually included in the artist’s works.

The focus is on the status of a work of art, its significance, its policies of representation and its relationship to the spectator.

By constructing different spatial environments for her photographic compositions the artist has previously directed us to the issue of design and architecture in relation to visual art. Throughout art history the difference between the two has always pivoted around the concept of utility, but this notion began to disappear in the 1920’s and 1930’s with the establishment of the Bauhaus school. The process later continued via initiatives by various individuals, including the architect Adolf Loos. Cibic takes Loos’ argument in his critical essay Ornament and Crime of 1929 as the focal point of her exhibition project “The Object of the Spectacle”, which seeks to promote the analysis of two examples of commodification – architecture and the work of art as such. 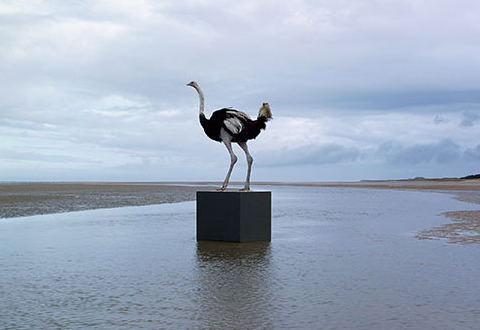 “The Object of the Spectacle” utilises the vestibule of the gallery to focus on the space of display itself, which at the same time becomes the object on display. Cibic presents an architectural analysis of Adolf Loos’ Dammenzimmer in the Mullerova Villa in Prague, a modernist boudoir or theatre box, as Beatriz Colomina describes it. By inserting it into a gallery space Cibic wishes to inspect and compare its architectonic properties to create a situation where the visitor is placed at the point between seeing and being seen.

A person sitting inside the room is able to observe a stranger entering in front of them, the light source being specifically placed behind the sitter, who, illuminated from behind is thus transformed into a silhouette for the person entering. This is a unique instance of a private space, originating from a feminine ‘space to feel’, the equivalent of which in the public space lies within the art gallery.

In Loos’ terms, decoration and photography are both tactics which produce mere souvenirs, stripping objects of their inner conceptual/contextual value. The investigation of this notion is to some extent the central point of this exhibition. Beatriz Colomina offers an intriguing reading of Loos’s architecture, moving away from gender issues of great modernists into the research of the production of space itself. By renaming the boudoir the theatre box, she posits it as a spatial-psychological device that could also be read in terms of power or of regimes of control.

Cibic explores further the history of the boudoir’s function – specifically of its early 20th Century role as a space in which objects such as souvenirs and exotic ephemera were displayed. This is before modernism transforms it into almost an observational panopticum from which, with the help of architectural manoeuvres, the sitter in the room is the person to whom everything (within her surrounding) is on display. The wallpaper lining of Cibic’s boudoir reconstruction depicts a collection of decorative motifs – drawings of birds of prey from sources as different as 17th Century encyclopaedias and contemporary Sunday painters. The birds depart from their historical context of serving a basic human function for hunting, move to becoming bearers of luxury status concerned with possession, and finally become ephemeral contemporary spectacle props. 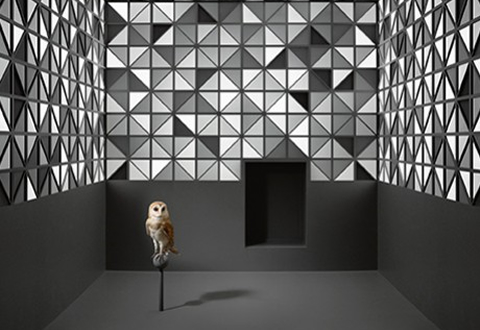 The bird as an ornament becomes the actual object on display in another work, a video portraying different species of birds of prey rotating on replicas of famous designer stools and tables from the 20th Century. The latter still retain their original function of display and accommodation, but their status of haute couture furniture is downgraded to a mere plinth, an accessory of the architecture of display.

All that seems left of the physical traces of the birds is a series of souvenirs par excellence, intricately crafted falcon hoods, that are here designed to serve as objects in their own right. The whole mise-en-scene within the gallery space seeks to fluctuate from prop to sculpture to stage and back, raising questions regarding the spectator’s role with or within each of these situations. Is the viewer the object of the spectacle, or is the object of the spectacle the object produced for the viewer?