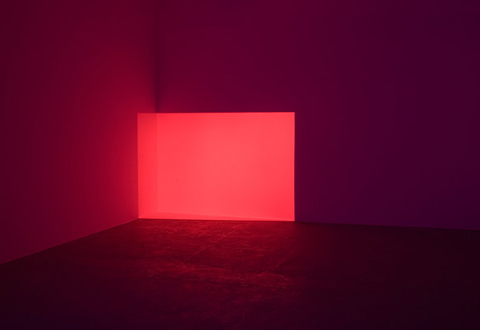 For the first time, Almine Rech Gallery in Brussels is presenting a solo exhibition by James Turrell. Born in Los Angeles in 1943, James Turrell lives and works in Arizona.

From 1967 he presented his first Projection Pieces at the Pasadena Art Museum. These pieces are “revolutionary” and have been received as such in this time, sparking controversy. They are the first works that use light as a material in itself to be understood and “sculpted.” These works lay foundations that are entirely new in the history of Art through the use of light not as an element used for reflecting or lighting up an object or subject on a certain day or defining shadow and light in the tradition of pictorial studies of depiction from the inception of Western painting, but instead as a true medium.

“My work deals with the concrete nature of light, the contact with it. Light is not ephemeral, it is material. Photons are matter, they produce a wave-like phenomenon, like water”.

Although Turrell’s artistic approach was little understood at the time, except for a handful of critics, institutions and collectors, the scientific component of his reflection caught the attention of the County Museum of Art in Los Angeles, which gave him the means to pursue his work through the “Art and Technology Program” together with artist Robert Irwin and perception psychologist Edward Wortz. Turrell, starting at the end of the ’60, would create experimental spaces, that were either completely black, soundproof or filled with colored light and explore the impact on our perception. These works anticipate later works created in the seventies and eighties which today are a strong source of inspiration in contemporary art.

In 1979, James Turrell acquired a died down volcano in the Arizona desert: Roden Crater. This site was chosen due to its natural landscape and its location under skies whose light is particularly intense, with rare cloud coverage. Eventually, it will comprise more than ten “rooms”, Sky Spaces “that make use of their minimal architecture, skillfully designed by Turrell, and their orientation: artificial and natural light, the position of the stars. The Roden Crater is the central work of the artist and is included among the large-scale projects supported by the DIA Foundation, along with works such as Smithson’s Spiral Jetty and Lightning Field by Walter de Maria, to name a few. 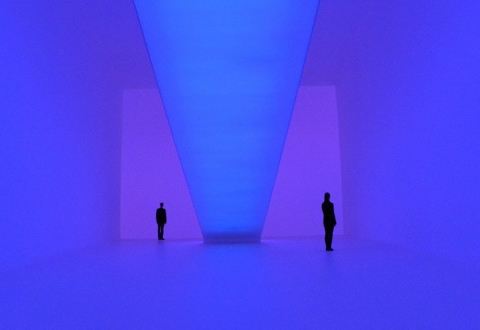 The James Turrell exhibition at Almine Rech Gallery in Brussels will be an opportunity to discover a Projection Piece from 1968 entitled Acro Red, and the Space Division Light Piece from 1992 Cherry. The exhibition will also feature two large-scale holograms crafted by James Turrell with the assistance of a physicist, the last in a series that he has decided to conclude and which are the product of a complex labour of capturing shapes and light, as well as Transmission Pieces, another project of capturing.

An unconventional and unclassifiable artist, James Turrell incites viewers to look within themselves and question their own perception of light, matter, color, shape and their position as spectator, their role in the definition and the existence of the work of art.