Lighthouse at Brighton Festival. James Bridle: Under the Shadow of the Drone 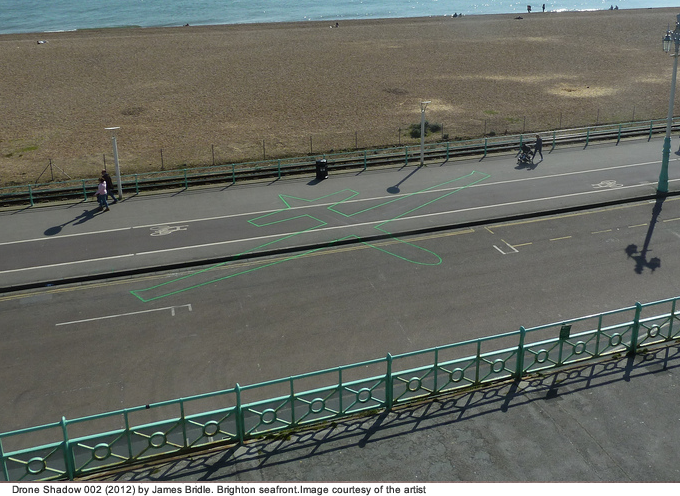 For Brighton Festival 2013, guest directed by Michael Rosen, Lighthouse is presenting two projects that illustrate how contemporary military technology both enables acts of disappearance, and also conceals the machinations of war from us.

Under the Shadow of the Drone by James Bridle is a site-specific outdoor work. It is a one-to-one rendering of a military drone aircraft, as used by the US and UK military, above battlefields around the world. The unmanned aerial vehicle, or drone, has become one of the most potent weapons of contemporary warfare. Remotely controlled by operators thousands of miles away, drones carry out aerial attacks which leave hundreds of people dead. They are one of the most controversial weapons of war.

Under the Shadow of the Drone makes them visible on our streets. It is a life-size depiction of a Reaper drone, one of a number of such weapons in service with US and UK forces. The Reaper is used for surveillance and bombing missions, in the declared war zones of Afghanistan and Iraq, and in the illegal wars of assassination taking place in Pakistan, Yemen and elsewhere. Such wars are made possible by the invisibility of drones to most people

The stark marking out in an unexpected public space of a Reaper drone’s silhouette brings the reality of these technologies into our daily lives. The work critiques the way that contemporary networked technologies, while enabling the digitally saturated culture of the 21st century, can also obscure and distance us from political and moral responsibility. 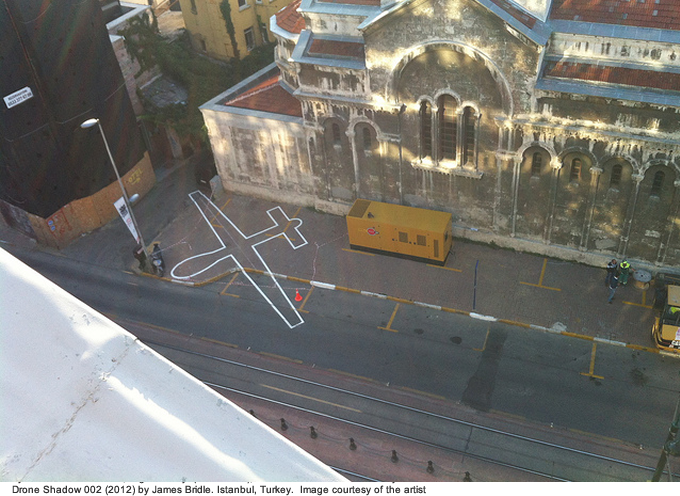 London-based artist and writer, James Bridle, formerly creative technologist in residence at Lighthouse, has developed a highly attuned practice that addresses the presence of military weapons, such as drones in our lives. He writes: “Drones are just the latest in a long line of military technologies augmenting the process of death-dealing, but they are among the most efficient, the most distancing, the most invisible. These qualities allow them to do what they do unseen. We all live under the shadow of the drone, although most of us are lucky enough not to live under its direct fire. But the attitude they represent – of technology used for obscuration and violence; of the obfuscation of morality and culpability; of the illusion of omniscience and omnipotence; of the lesser value of other people’s lives; of, frankly, endless war – should concern us all.”

By superimposing a large-scale drawing of the shadow of a drone in an urban location in Brighton, Bridle brings these chilling machines uncomfortably close to us, embedding them into our daily lives, and in the process perhaps making the reality of the daily occurrence of deadly drone strikes more tangible.

Under the Shadow of the Drone is part of Brighton Festival 2013. It is accompanied by The Air Itself is One Vast Library, an exhibition by Mariele Neudecker, which explores disturbing, and often invisible, technologies of war. Both artists are continuing the long tradition of artists bearing witness to events that governments would prefer we did not see. These projects further Lighthouse’s curatorial investigations into the invisible infrastructures that make up our world. 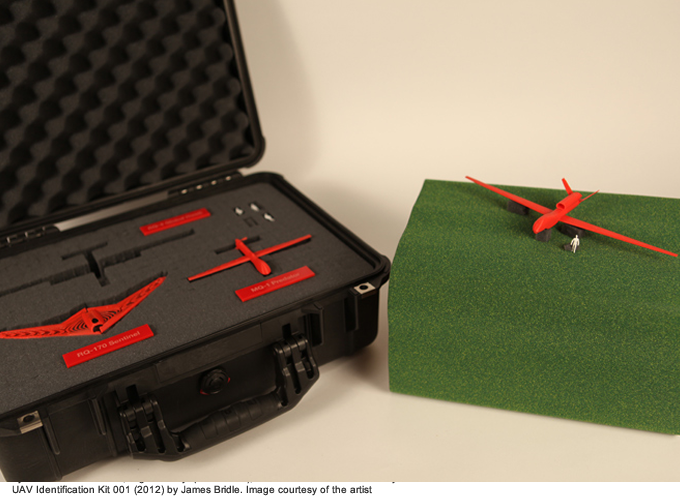 James Bridle is an artist, writer, and publisher based in London, UK. His work, including A Ship Adrift commissioned by Artangel, and The Iraq War Historiography, has been shown in galleries and museums internationally, in the UK, Netherlands, USA, Switzerland, France and China, and viewed by hundreds of thousands of unique visitors online. His formulation of the New Aesthetic research project has spurred debate and creative work, online and off, around the world. His recent work, Dronestagram, which documents the locations of US drone-strikes, has been featured in The Guardian, The Daily Mail, New York Magazine, the New Statesman and dozens of other publications. Bridle also writes for publications such as Wired, ICON and The Observer, where he publishes a regular column, and is a partner at the Really Interesting Group, a design partnership based in East London. He speaks regularly at conferences worldwide, including South by South West in Austin, dConstruct in Brighton, and Lift in Geneva.