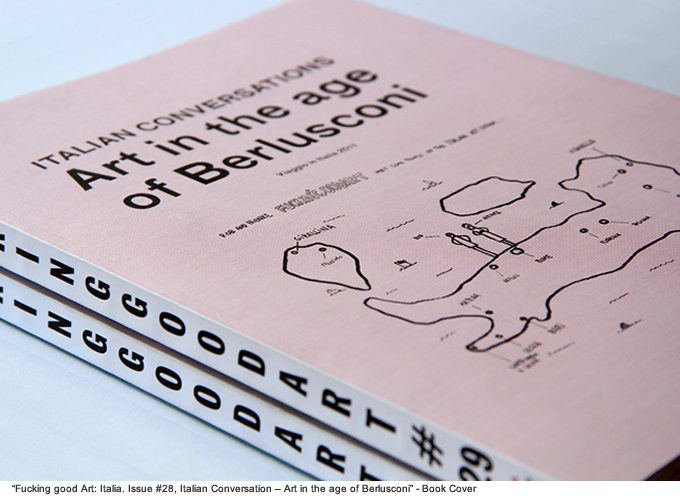 “Fucking Good Art” is a publishing project conceived by Rob Hamelijnck and Nienke Terpsma, two Dutch artists mainly working in Rotterdam and Berlin. Fucking Good Art focuses on new modalities of aesthetic journalism, on counter cultures and sub culture, to forms of self organisation and activism as models beyond the art market.

Their first magazine was published in 2003: it was like a handbook centred on the contemporary art in Rotterdam. Since then, Rob and Nienke have been examining different European contexts by observing them as outsiders, and without having never read up on the towns they visited, and therefore analysed, because they believe that being free from prejudices and completely opened to communication with their speakers has a great potential. Indeed, from their postulate we can infer that their working process is centred on active practices, by considering oral history, ethnography and self-organisation’s essential aspects, which are in turn alternative patterns to the art market, and new ways to examine and describe the contemporary situation. 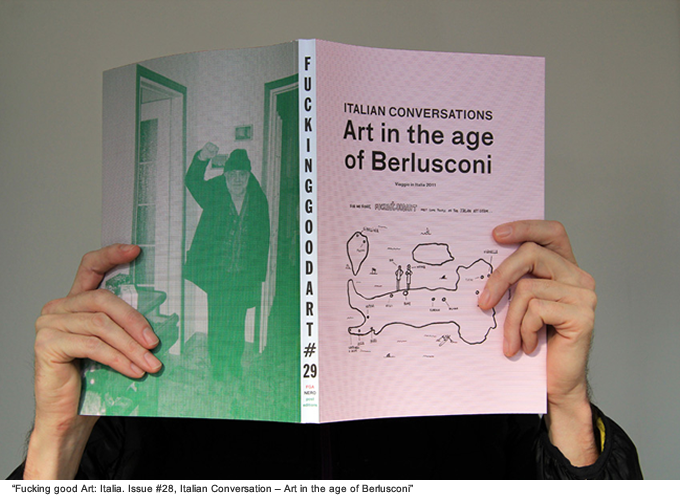 Rob and Nienke have conceived this publication as a sort of guide-book which critically examines the contemporary art situation in Italy, and has devoted large space to Italian art experts’ thoughts. From their conversations, which never fall into banality, emerges that sometimes working within this field during the era in which “Berlusconi is not only a person, but even a cultural symbol” is impossible. The situation they have to face is a transition period, in which funding is gradually less supported by the State, and more by private investors. Without being supported by these initiatives, in Italy there would not be such a thing as a flourishing and heterogeneous scene, the artists conclude.

The book is divided up into seven chapters and one final appendix, which makes a list of one hundred and thirty-six independent and non-for-profit initiatives operating on the Italian territory and sorted into spaces, publishing projects, independent theatres, fanzines, magazines, curatorial collectives and so on. Rome, Bologna, Milan, Turin, Lecce, Naples and Palermo, and their regions, are the objects of an accurate analysis through interviews with artists, curators, reporters, art gallery owners, photographers and museum directors.

The result of all of this work is an out-and-out investigation, not only from an artistic point of view, but also from a social and political one, and it was made possible thanks to the eyes and words of “active witnesses” involved in the process. It is also remarkable that during this kind of Grand Tour even some peripheral areas, such as Lugo (RA), Viganella (VB), Rivoli (TO), Matera, Santa Maria di Leuca (LE) and Gibellina (TP), have been mentioned, where, however, we can find initiatives starting from a local investigation in order to join up an International debate. 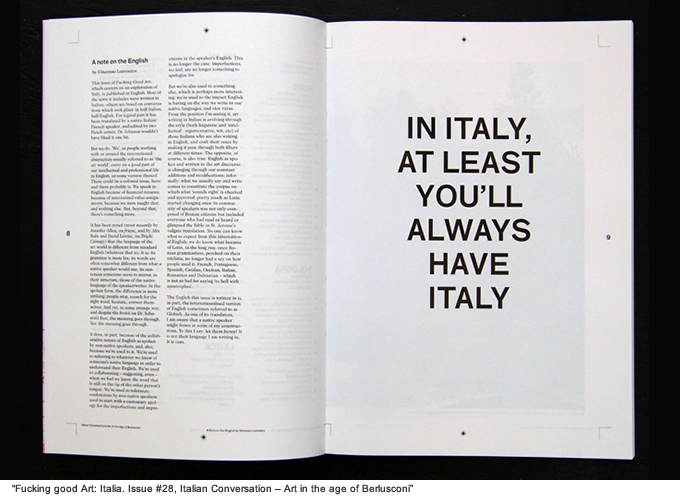 In addition to the so many first-person interviews and stories, in the book we can also find some artists’ projects: “Genealogy of Damnatio Memoriae Italy 1947-1993” (the history of the most meaningful dramatic events) edited by goldiechari; some images belonging to “Foresta Nascosta” (Hidden Forest), a project by Matteo Balduzzi,  Daniele Cologna and Stefano Laffi; and an interesting selection of pictures constituting “Napoli Captions”, Stefano Graziani’s project.

“Italian Conversations” is a useful book to fully understand the situation in which Italian contemporary art experts must work, and it is undoubtedly a proper tool for orienting oneself within a scene filled with so many initiatives and projects scattered all over the territory.In the last years, new spaces, practices and approaches redraw the Italian cultural map in relation to the ever changing European political and economical order: the scenario depicted by Rob and Nienke in their voyage is that of a country that, despite everything, is still able to produce culture, even if, as emerges from artists’ words: “In Italy you’ll always have Italy. We have met such wonderful people, and have seen and smelled such indescribably beautiful landscapes. And the art world in Italy is not as bad as some would have us believe. If we could get a job, then…” 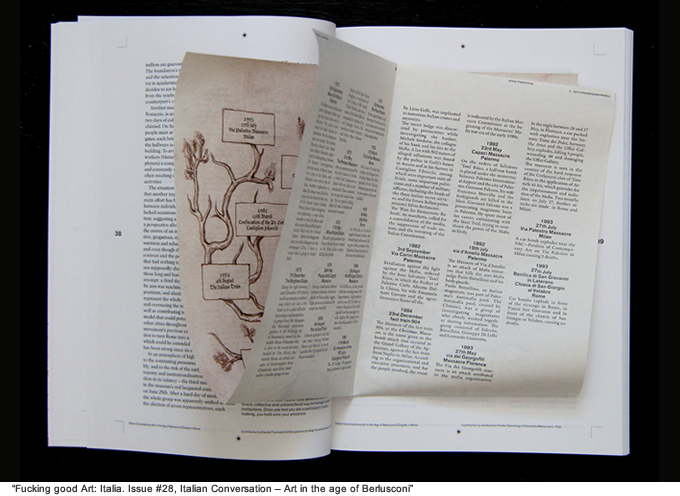