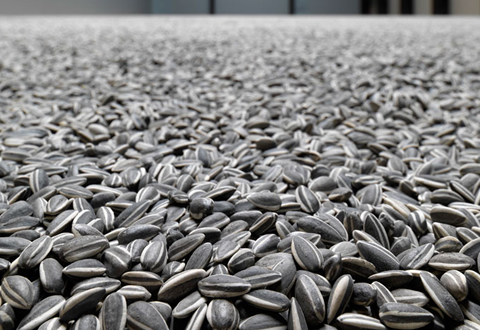 IOCOSE exhibits a new artwork at Tate Modern, made from a previous
artwork at Tate Modern.
The artist group has thrown several real sunflower seeds on Ai Weiwei’s
porcelain Sunflower Seeds. The porcelain seeds, previously exhibited
at the Turbine Hall at Tate Modern, are now part of a new artwork by IOCOSE.
The new artwork looks exactly the same as the previous one, as the
natural seeds and those made of porcelain are indistinguishable from
each other. IOCOSE reclaims the authorship of the new installation and
reminds viewers of Ai Weiwei’s previous statement: "what you see is not
what you see, and what you see is not what it means".

On the early morning of Saturday 29th of January, the four members of
artist group IOCOSE stopped at a grocery store at the Bankside district
in London, UK. They bought an innocuous bag of sunflower seeds at the
price of 1 British Pound. A short walk from the grocery was the
‘Sunflower Seeds’ exhibition by Ai Weiwei.

The installation, exhibited
at the Turbine Hall at Tate Modern as part of the Unilever Series,
displayed millions of hand-crafted porcelains in the shape of sunflower
seeds. The four IOCOSEs took hold of their catapults and started
launching the cheaper and real sunflower seeds in the exhibition area.
Then changed the signs at the Turbine Hall and renamed the artwork
Sunflower Seeds on Sunflowers Seeds.

While the security was trying to understand what was happening, the
visitors appreciated the new artwork. "It looks exactly the same" said
an old lady when addressed by IOCOSE. "I came here at Tate to see the
famous work by Ai Weiwei, but I’m not disappointed to know the
exhibition has been changed", said a boy, while taking pictures of the
new artwork. A gentleman instead complained about the intervention: "how
very dare you? This is art that you are ruining, and art is everyone’s!".

It took a while before the security noticed IOCOSE’s unruly behaviour. When asked to leave their own exhibition, the four IOCOSEs expressed
disappointment and were joined by a group of tourists who were honestly
appreciating the unexpected opening. Despite this, IOCOSE would like to
complain for the lack of promptness by the security. Now that IOCOSE’s
work is on exhibition the group would like to demand major awareness on
its preservation. 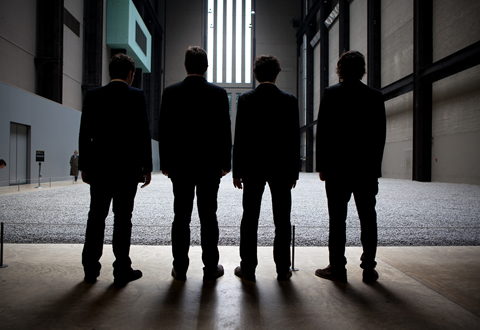 Artist group IOCOSE is proud to be exhibiting at such an important
institution as Tate Modern. The Unilever Series featured in its previous
editions some of the greatest international contemporary artists, such
as Anish Kapoor, Olafur Eliasson, Carsten Höller, Ai Weiwei and Miroslaw
Balka. IOCOSE is proud to be mentioned next to such important artists.

The group IOCOSE started working in 2006. Among its most famous
projects, in 2010 the group worked on In the Long Run, a BBC News
special edition for the death of pop icon Madonna. In 2009 it exhibited
Floppy Trip, a drug made of floppy discs. In the same year
collaborated to Sokkomb, the IKEA guillotine. In 2008 set up a
propaganda campaign for the Italian Democratic Party based on thousands
of spam emails. IOCOSE is also responsible for the NoTube Contest, an
ongoing contest for the most valueless video on YouTube.