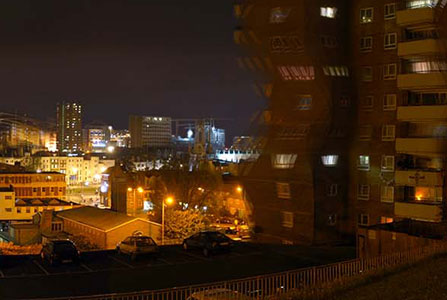 The Netherlands Media Art Institute presents in collaboration with the 5 days off festival the exhibition (in)visible sounds. In this exhibition the visitor enters the world of invisible technology. This is the world which employs the electronic fields, radio waves, frequencies and air pollution that are present around us.

The omnipresence of computers and mobile communications apparatus has led to digital technology increasingly becoming a part of our environment. Invisible wireless networks have altered our ways of communicating, working, learning and playing. They have even taken on an important role in the creation of our identity and our relationships with others.

In the course of this development, interest in the apparatus has increasingly shifted from the technology itself to the role it plays in shaping our experience. The artists in this exhibition investigate the invisible world of sound waves and frequencies and electromagnetic fields. In all cases they touch on issues concerning the radiation that is ever-present, but imperceptible to our senses. They make use of technologies that are present around us, but invisible, and by playing with electromagnetic waves and different frequencies their works surprise us with an abundance of information and possibilities.

In his work Tempest (2004) ERICH BERGER (Sweden) makes use of the basic principles of Van Eck Phreaking, a technology through which the content of a computer screen can be reconstructed at a distance by picking up the electromagnetic field surrounding that screen. In Tempest pure generative graphic forms are transformed into a dense and intense composition of sound, noise and light. The graphic forms that appear on the screen produce radio waves, which are then picked up by several transistor radios. These are tuned to various AM frequencies and ultimately produce the distinct and lively sounds that go together with the images.

DAVID HAINES and JOYCE HINTERDING (Australia) use the live data stream from televisions to precipitate avalanches. In their work Purple Rain (2004) Haines and Hinterding draw an overwhelming connection between the mystic forces of nature and the presence of the thousands of watts that are stirred up by the frequencies of the electromagnetic field.

In the installation Evolving Sonic Environment (2005-2007) USMAN HAQUE and ROB DAVIS (UK) investigate to what degree the presence of people in a space influences the audio composition created, without the intervention of sensors. Several audio speakers hang form the ceiling, each generating a sound with a different frequency. Intercommunication between these units balances the sounds and maintains the sensitive sonic ecosystem, which is only disrupted by visitors. The consequences these interventions have on the brain of the space can be observed, live on the internet..

The visitors also play an important role in the installation AudioSpace (2005-2007) by THEODORE WATSON (US). In the 3D augmented aural space visitors can leave messages for others in the form of sound. By means of a special headset with a microphone, texts can be spoken into the space, and at the same time, messages left earlier can be retrieved. The space is filled with invisible messages from previous visitors.

On the other hand, BRANDON LABELLE and JAMES WATTS (US) let one hear the mystic sounds of the building. In the site-specific installation Radio Flirt (2007) visitors with small portable radios walk through the space in search of characteristic noises and the secrets of the building.

OLGA KISSELEVA (Russia) lets us see the flows of energy and magnetic pollution that surround us. In Landstreams (2006) she creates a new type of abstract landscape art. The paintings are based on various data flows that have been analyzed by a computer.

In the film Earth Moves (2006) by SEMICONDUCTOR (UK) the visualization of unseen forces is also central. Earth Moves reveals an unstable world that is always in flux. The contours and forms of everything around us are being altered by the invisible force of acoustic waves. This process is imperceptible to the naked eye. By combining digital photos of various places with sound from the same locations, new acoustic landscapes are created.