Invisible Fields. Exhibition at Furtherfield.org open until 11th of August 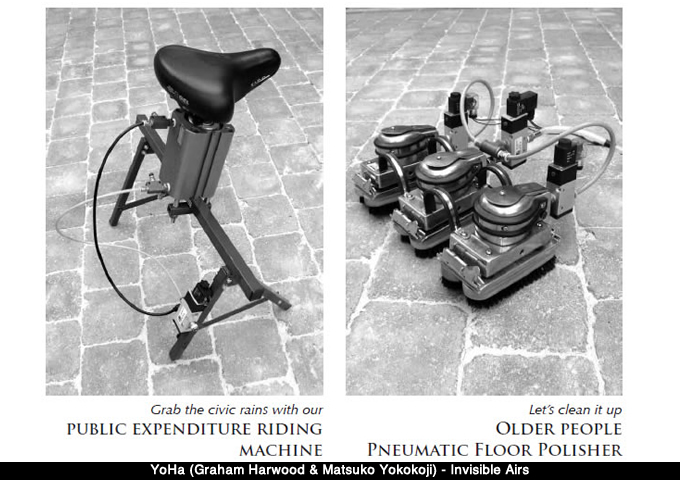 Our social, economic and cultural institutions are being dismantled. Control over the provision of social care, urban and rural development, and education is being ceded to the market facilitated by unseen technological and bureaucratic systems.

Undeterred, the artists in this exhibition meet the challenges that ensue with clear eyes, spontaneity, experimentation and a sense of adventure. This selection of installations, digital video, net art, painting and drawings deal with conspiracy, money, politics and hidden signals.

As part of Invisible Airs, YoHa (Graham Harwood & Matsuko Yokokoji) attempted to read 20,000 comma separated lines of Bristol City Council’s apparently open-data. After which they understood that power reveals itself through multiple layers of boredom. They constructed four pneumatic contraptions which reveal the relations contained within the fields and the people affected. A video made by Alistair Oldham documents their art project Invisible Airs, Database, Expenditure & Power. 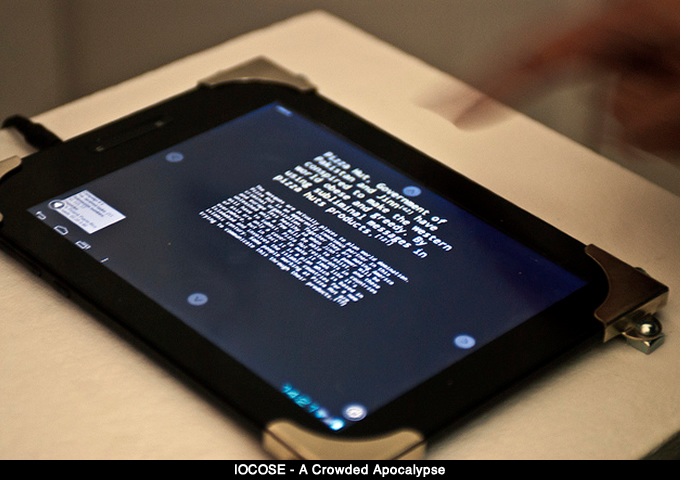 This is shown alongside Data Entry, a video that investigates how databases operate on us and through us by looking at the work of midwives and women in labour. “Databases move through us, allowing new forms of power to emerge… [they] order, compare, sort and create new views of the information they contain. New perspectives amplify, speed-up and restructure particular forms of power as they supersede others.”

Edward Picot is an artist and writer who also works as an administrator in the UK health service. His seriously funny soap-gone-wrong, Dr Hairy In…, chronicles the trials, tribulations and cogitations of an ordinary (but slightly hirsute) general practitioner – with hilarious results!* Dr Hairy’s struggles with NHS bureaucracy are brought to life in a series of satirical video shorts, featuring puppetry performances given by a child’s doll and screened in a doctor’s waiting room, as an installation. “It was like watching Team America set in the NHS” says Ian Hislop (broadcaster, editor of Private Eye and NHS patient).

Kimathi Donkor‘s Toussaint Louverture at Bedourete is a history painting made with oils on canvas that depicts an icon of anti-slavery struggles who, in his lifetime, was smeared as a reprehensible war lord. Created to mark 200 years since the independence of Haiti, the image shows the leader of the Haitian 1791-1804 revolution in a pose reminiscent of the Jacques Louis David‘s Napoleon Crossing the Alps, surrounded by inspired revolutionaries in a battle that led to the creation of Haiti as the first slave free nation in history. In a short film by Ilze Black, Dr Richard Barbrook and Fabian Tompsett of Class Wargames interview Donkor about the work.

Laura Oldfield Ford‘s recent drawings are the result of walks (or ‘Drifts) through deserted urban spaces in the part of East London being prepared for the 2012 Games. They depict layers of failed utopias of the past and present and imagined futures. Known for her poetic and politically tuned ink drawings produced in print and online in her zine Savage Messiah, Oldfield Ford documents her psychogeographic explorations, in text and image, of the city as a site of social conflict, melancholy and political resistance. 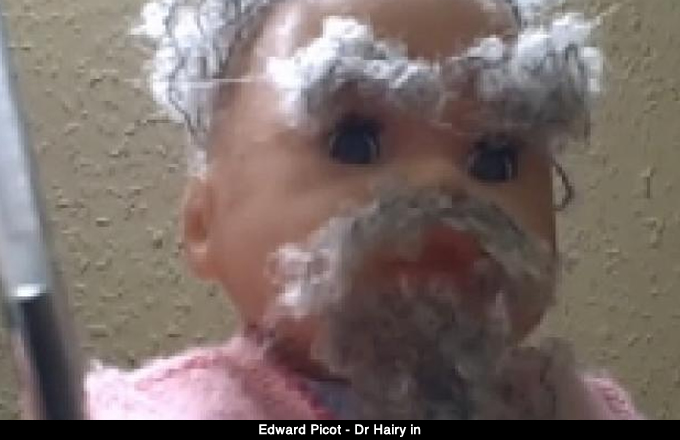 Net artist Dave Miller presents two agitprop posters and a pamphlet of images reproduced from his interactive, multi-layered, online narrative bankers_bonuses. Miller worked with software he created himself to combine hand drawn illustrations with images gathered from Internet searches, and provocative (sometimes preposterous) statements made by powerful people about the ethical questions arising from the economic crisis.

Italian artist group IOCOSE has created A Crowded Apocalypse, a net art project that exploits crowd sourcing tools in order to simulate a global conspiracy. The “crowd” assembles its own conspiracy and then protests against its protagonists and effects. A Crowded Apocalypse is commissioned by AND Festival and Furtherfield.

As we scan our cultures for maps, role-models, possible ways of living in today’s world, we often encounter images of society that are created by its hidden, controlling forces. By naming, revealing, tracking, playing, making, subverting and transforming tools, circumstances and figures that give rise to current crises we enlarge the debate and extend our freedoms. And the artists in this exhibition offer examples of just some of the ways in which this might be done.