Invisibility and surprise. Eva and Franco Mattes at Carroll / Fletcher

Three plain white desks are what you see once you enter the bright first room of Carroll / Fletcher gallery. Their arrangement on the floor, perpendicular to the walls of the room, and their uniform colour to the rest of the environment give the feeling of setting up an unhistorical setting such as the ones by Adolphe Appia.

Space is filled with the sound of three voices that, at first, I can not distinguish one from the other; similar to each other, one perceives the lack of depth in their tones. All in all, given the abstraction of installations, I can not help but think about Bertold Brecht’s Epic Theatre where the acting and the staging were developed in order to avoid emotional involvement and indeed foster intellectual reflection. Behind each of the desks is arranged a screen; their position forces me to sit on the ground, curling up. On the screens pass the images of an avatar generated by a software that reads a text; the voices are all the same, but the puppets who render them belong to varied ethnic groups and sexes.

The spontaneous reaction is to smile, terrified of what you are seeing and hearing; paying more attention to what they say, you realise how the colourless tone of the voices do not go hand in hand with the content. They are revelations, secrets that need concealment of the identity of those who have delivered them; it is the artwork Dark Content, by artists Eva and Franco Mattes at Carroll / Fletcher gallery in London, from 10 June till 27 August 2016 with the exhibition “Abuse Standards Violations”.

A thorough study of the press release reveals that the two, following the removal of their work “No Fun” (2010) from YouTube, became interested in the mechanisms by which the contents are approved, tolerated or deleted from online platforms, learning that the claimed algorithmic automation by which such materials are filtered is in large part a lie. In fact, behind every “This content has been removed because it does not conform to this website” lurks a person of flesh and bones trained to separate what is good from what is not good on the basis of guidelines.

These platforms conceal the existence of such people promoting the idea that there are algorithms that filter the content we publish; without resorting to the now abused juxtaposition of Panopticon and social media, it is clear that these companies have the interest to show the least possible human element because this is the truly exposed nerve of their role as gatekeepers, i.e. they should and can decide what can be domesticated and what is irredeemably dangerous.

In this project, the Mattes seem much interested in these dynamics as in the online contexts in which secrecy and anonymity reign supreme; they themselves have ventured into the Darknet to contact and interview these secret agents of the dot-com policies, and is always in the Darknet that they uploaded all episodes of this work – you could find some on YouTube as well.

The question of anonymity as right to preserve as precondition of a more free conversation has been the focus of much discussion in the meeting which took place with the same artists – in conversation with artist Jesse Darling and curator Ben Vickers – at the The Institute of Contemporary Art (ICA) on 19th July 2016: “to make propaganda means not publishing certain content,” they say, “we can understand this process as the development of a sanitized context”. For instance, on Facebook we act in an environment where everything is designed to keep us at bay, to not let us go off the rails built by developers; Darknet, according to the two artists, is an adventurous environment where we can meet people in new, no pre-built ways, and therefore host more potentially genuine behaviours. 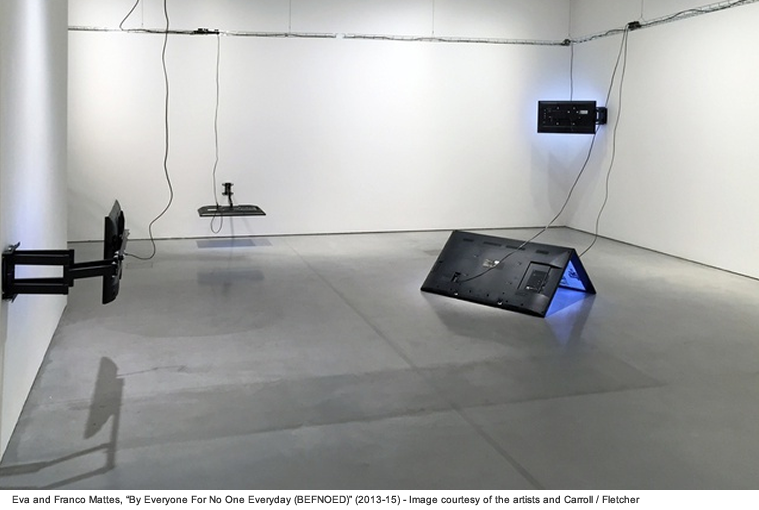 Invisibility is also explored with two other series of works in the exhibition, BEFNOED (By Everyone For No One Every Day) (2013-2015) and Image Search Result. The first consists of items through online services; the production of the works has been commissioned to companies which do of their own invisibility an important pivot of their offer.

In BEFNOED (By Everyone For No One Every Day), monitors have been arranged so as to force me to adopt uncomfortable positions, exactly as the display of “Dark Content” pieces. The effort that I make emulates that of the people shown in the videos, paid to perform ordinary actions through crowdsourcing websites, a practice that has an illustrious antecedent as Moholy-Nagy’s telephone paintings (1923). The artists disseminated these videos on what they considered exotic, peripheral social media; appealing to an essentially Situationist approach, the two explained they did so in order to meet new audiences who find themselves helpless in the face of their bizarre contents.

This inclination is a central aspect of the work of the Mattes, though never in the foreground; in many of their performances, the audience is taken aback – think to “No Fun” and Freedom (2010), an online performance within an online war game in which Eva pleaded with the other players to save her because she was “making an art performance”; the result? Her being killed again and again.

The specifics of each of these contexts, from which the behavioural habits of the people who frequent them come, are ignored; the two artists seem interested in recording the most memorable reactions, with an approach similar to the making of candid camera shows. The definition of their work from the reactions it evokes in people not prepared to it is, not coincidentally, the same one that is explored in the “Dark Content” series; people who decide that a content is not appropriate for a given context are themselves part of the work, especially in the cases of the Mattes’ works (or, looking in other directions, Petra Cortright’s). The removal of such content from online platforms as part of this system is the highest achievement of the dynamic activated by the Mattes; is there any most striking feedback than a censorship? 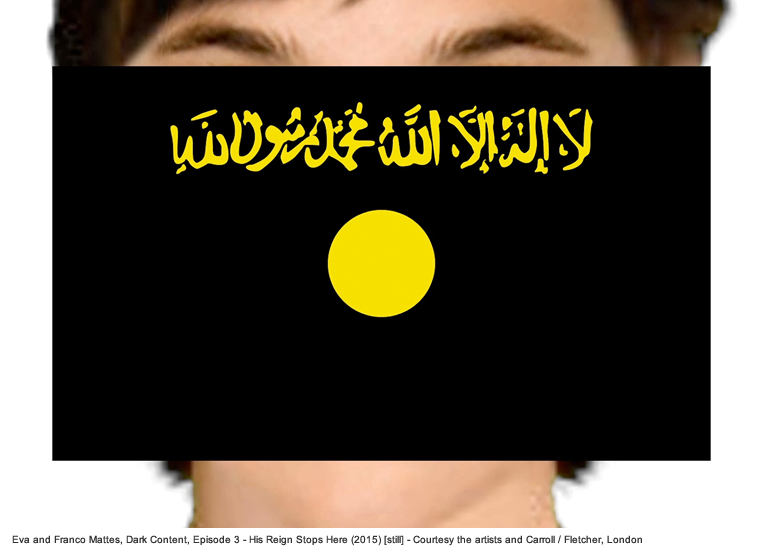 To visit this exhibition is to observe the last 5 years of artistic research in the field of online privacy, crowdsourcing and the deployment of invisible forces by dot-coms in regard to what we can produce and consume. The thematic threads that bind the many and various works presented by the artists are not easily identifiable; on one hand, we have the criticism to the sanitation of production processes and the alienation of individuals who must act like machines without exposing their humanity; on the other, the search for a new place where they can act free, without superstructure.

The anonymity of the Web is that of the invisible which have to produce without being seen; the anonymity of the Darknet belongs to individuals who are free from such machinations. In this sense, it is hard not to see in this light Darknet as the dangerous but socially interesting outskirts of the big city named Web; historically, the arrival of the artists in this kind of peripheral areas is the first sign of a larger process that leads to the domestication of entire urban areas and the Mattes are once again in their careers trend precursors, moving artistic research in not domesticated contexts, or, as they say, “sanitized”.

In this way you can find the differences between artists, nay, people who knew the internet of the nineties which was not yet colonized by the dot-coms’ logic and those who were born and grew up with Facebook, Twitter and YouTube; if the latter develop disruptive strategies within these platforms often without even questioning the possibility to go beyond them, the former seek a lost paradise, a context where nobody could know if you’re a dog, a place where you could be true to yourself without fearing to associate your real name to not acceptable social behaviours. 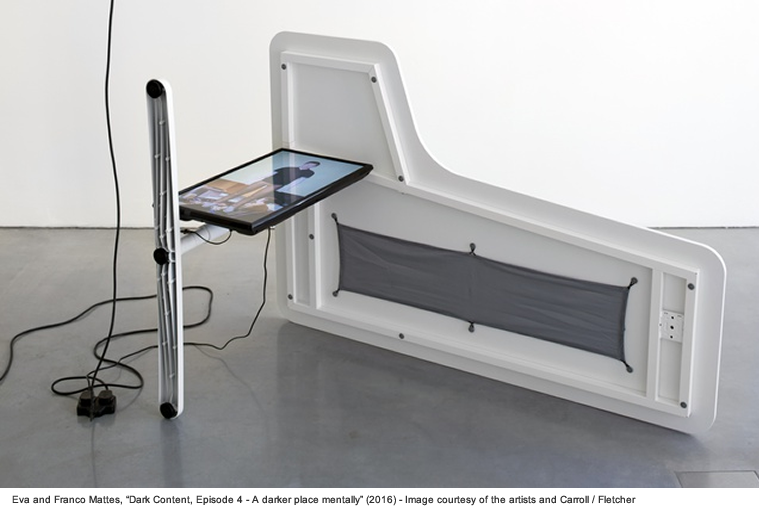 The exhibition implements different and sometimes discordant approaches to issues that in recent years have been the focus of more and more artists interested in the mechanisms that underlie the online world; the result is a background noise which requires application and study to be deciphered, just as accessing to the Darknet requires technical expertise not available to anyone. The division between expert and non-expert is fundamental to understand this exhibition, and more generally the work of the Mattes; if the former can appreciate the references and tactics of the Italian duo, the latter is kept in a position from which she can only react instinctively and unexpectedly – giving a very different feedback from the one usually expected by contemporary art audience.

The manipulation of the public is a central theme in the history of artistic performances and before that of political action; “Abuse Standards Violations” is an exhibition that invites us to reflect on what it means to participate in a critical reflection, before you even ask us to participate in the action that flows from it.