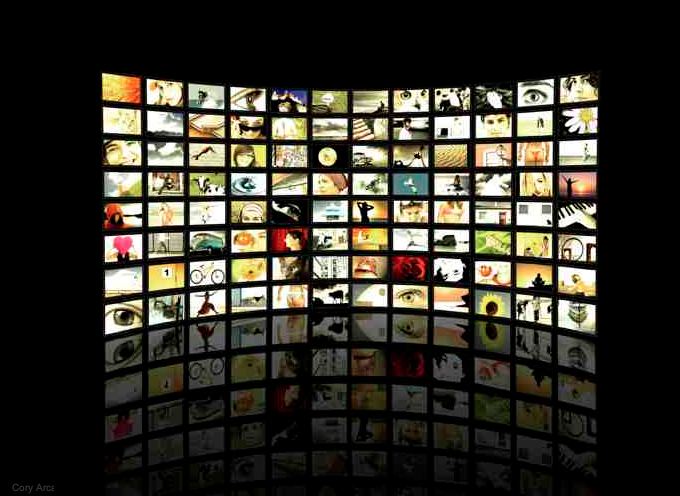 Short History of Nearly Everything by Bill Bryson, is the title of a popular science book published some time ago. But may also be the subtitle of Adam Arvidsson and Alessandro Delfanti Introduzione ai Media Digitali, a short history (150 pages) of nearly everything that an internet user or university student needs to know about the political, economic and social implications of new digital media.

The book, pubblished by Le Edizioni del Mulino last 21 March 2013, is presented as a manual, and, just like any manual, it has the advantage of being readable, accessible and exhaustive. Another strong point is its capacity of combining a thorough historical review of different theoretical reflections on the relationship between technology and society, with a very crystal clear and up-to-date vision on the ever-evolving panorama of digital media. It provides us with a number of theoretical lenses, enabling us to look at the contemporary scene while exploring a concrete analysis of the problems and the opportunities brought about by new digital communication technologies.

For a manual, the greatest challenge is not only to be a reasoned synthesis of all the literature available on a given issue, but also to be able to provide points of view which are innovative and deriving from the authors’ personal research. This book is like this: beyond its didactic nature one can easily spot the lines of research on which Arvidsson and Delfanti have been working on for years: the globalization of communication processes and creative industries, the social networking and the economy of reputation ˗ all recurring themes of Arvidsson research ˗ and issues related to open source, online collaboration, peer-to-peer culture, lights and shadows of collaborative web, which are peculiar themes of Delfanti’s research. 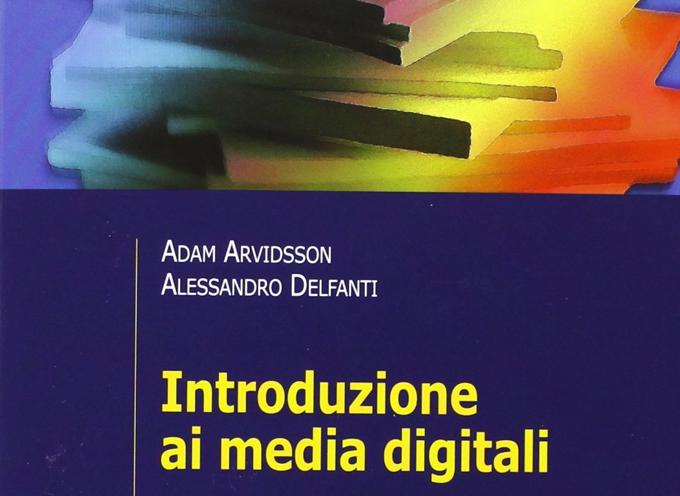 The “pictures”, brief parentheses of vertical insight, embedded within the horizontal flow of the text, sketch a map of the key themes realting to the digital present age: piracy and copyright, Creative Commons, makers, algocracy (the supremacy of algorithms), (pirate) Shanzai Economics, Wikileaks, the Arab Spring, sexuality and pornography, the video-game industry, new trends in social research (digital ethnography).

Each chapter is a new pair of glasses through which to look at digital media: the cheaper lenses (chapters 5 and 6), social (chapters 3 and 5), political (chapters 2, 3 and 4).

The two authors creates a good way for the most demanding reader to approach a number of insights. The bibliography provided in this sense is very useful. Unlike most Italian books about new media coming out on a yearly basis, this book is equipped with a much more international bibliography, thus pushing the Italian reader to confront the public foreign debate on these issues.

But the greatest merit of Introduzione ai media digitali is to give the Italian reader an alternative to the obsolete dichotomy apocalyptic/integrated, which unfortunately has been monopolizing the debate on media and society for too many years. The book just skips such sterile division, offering a more complex vision of the role of digital media in society, in which media are at the same time instruments of liberation and control, democracy and propaganda, cooperation and exploitation, and may act, as they always have in the course of time, in a tactical or strategic way. 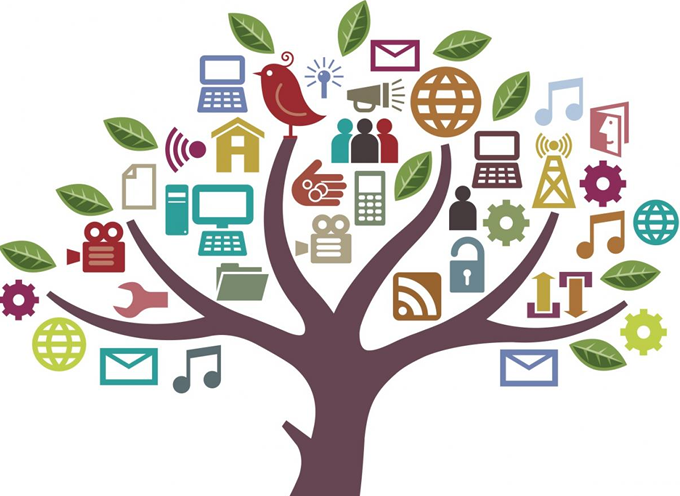 This book deserves to be read to develop an awareness of one’s digital identity, one which is not crushed by the present age. The daily use of Facebook and smartphones has become so pervasive and obvious that it does not need any explanation. As stated by young Belarusian Evgeny Morozov, one of the most popular critics of the Net, the speed and effectiveness of the new digital media has made us forget the political and economic consequences that they bring about.

Delfanti and Ardvisson work makes us think instead about these consequences from a non-binary and non-black-or-white perspective. The vision on digital media presented in this book needs to be understood in terms of affordances, i.e. the specific properties of the media guiding the interaction. For instance, Twitter is a microblogging system enabling us to do certain things (e.g. writing a text of 140 characters), and not others. The inventors have designed it for other purposes, but then users have invented  hashtags and Twitter Fiction.

The concept of technology as affordance stems from interaction design (Norman, 1988; Gaver 1991) and is able to take into account the social uses of the media, as claimed by Gaver: “the affordance of an object refers both to the object and the actor. This makes it a very powerful concept to understand technologies, since it focuses on the possible interactions between technologies and the people who will use them” (Gaver 1991: 80). This vision about the media goes beyond the 20th century vision theorised by Benjamin, describing media as apparatur, i.e. instruments capable of “modelling, organizing and changing human perception” (Pinotti, Somaini 2012). The media are indeed apparatur giving a different form to human perception, on the basis of their properties, but are in turn acted by individuals and socially situated, and can be diverted towards a  liberating usage recalling the Stallman one, or incline towards censorship, control and propaganda, concepts so dear to Morozov. 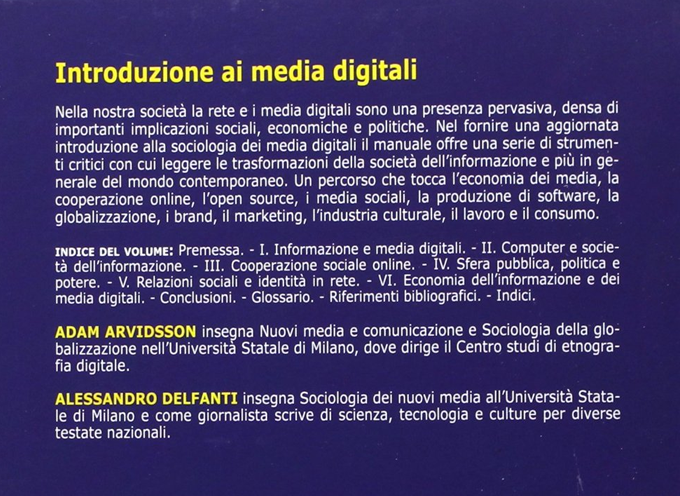 This book has however one essential limit: the lack of in-depth analysis on the huge variety of topics described. The contemporary digital mediasphere is discussed without dwelling on any of the key elements for more than two or three pages. At the same time, such criticism does not take into account the didactic nature of the book, whose aim is to become a glossary of the keywords relating to sociality and digital economy. Such keywords are presented as the starting point for further investigation. Here you will find a reasoned synthesis of almost everything you need to know about digital media.

For all the rest, please ask Google Scholar.