Inside the “Anticamera” of the Nanou Group. Visions and ideas 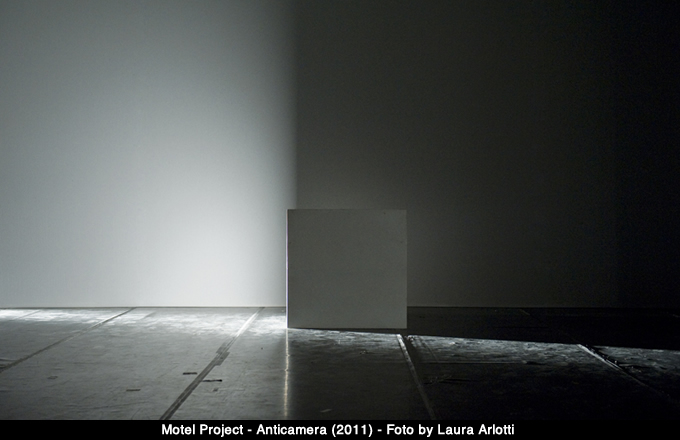 From May 9 to 13 Ravenna hosted the special project Fèsta, an exhibition made to celebrate and start an artistic cooperation between four Ravenna’s new theatre groups: ErosAntEros, Fanny&Alexander, Nanou Group and Menoventi. E, the name chosen for the cooperative, starts a process of collaboration between different competences as well as the artistic and organizational talents of the four groups, turning the experiences of each group, the sometimes more or less similar aesthetics, into a collective set of shareable strengths.

This strategy seems the best solution to face the current Italian refusal to either promote or even encourage artistic production, pushing those who choose it as their life-style to the margins (at least bureaucratically and financially speaking). This is why, despite being Emilia Romagna one of the regions in Italy that support theatre and performance, the four groups had to resort to cooperation to preserve distinctive qualities while strengthening common material practices . 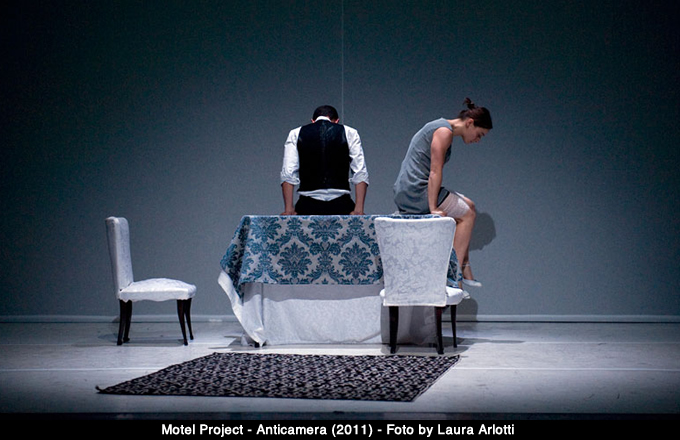 Fèsta expressed itself through the spirit its name conveys (it is the English word for “Party”), its agenda being organized through a programming that included performances by the four groups – plus Orthographe, another performance collective in Romagna – along with radio performances curated by Altre Velocità, book and installations exhibitions, workshops and concerts. In those five days Ravenna made space (and provided venues) for an organized artistic hub. In fact, from fragmented and scattered, the performing scene is now increasingly becoming articulated and packed with opportunities, able to pave the way for the creation of a solid network upon which to evolve and develop new initiatives.

E plans to become a cooperative. Although its nature is transversal to the different groups it aims to link,– let’s consider, for a moment, the recognition that companies like Fanny&Alexander and the recent duo ErosAntEros have reached—it functions horizontally, that is, its final intention is to make sure that all the members have equal access to instruments and have the ability to do their artistic research and to show their work in the most appropriate venues .

The atmosphere at Fèsta was truly collaborative, with an overall desire to mix different artistic languages, as well as to get in touch with the public concretely and honestly, by using places and art forms to establish a dialogue with the city and with the guests. The presence of the radio as opportunity for dialogue and exchange, the concerts at the harbor, the installations and dance shows by the special guest artists transformed this series of events an important moment in the creation of an effective and solid network between artists and the territory.

Among the various events presented we recall the preview of Discorso alla Nazione by Fanny&Alexander; Perdere la faccia by Menoventi; Nympha, Mane! A performance by ErosAntEros, followed by Contagio Mnestico with philosopher Susanna Mati; and finally the exhibition of the creative derive born from the project Motel by the Nanou Group, including a slideshow by Laura Arlotti and Claudio Angelini dedicated to the latter, a play excerpt performed at the Ninapì Gallery by Anticamera and Source, an installation project by sound designer Roberto Rettura. 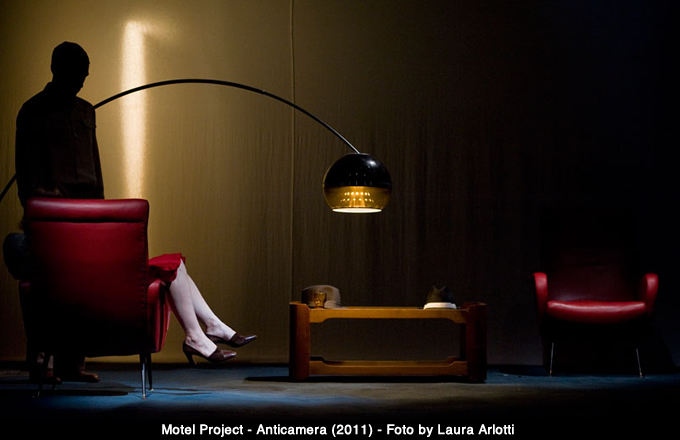 Nanou Group is one the four artistic entities involved in the cooperative. Since its birth in 2004, it has brought about a very interesting project on the possibility to combine different languages , from physical performance – extended to professional athleticism – to the evident dramatic and expressive nature of sound and light.

Born in Ravenna eight years ago, after Marco Valerio Amico, Rhuena Bracci and Roberto Rettura had their lucky fortuitous encounter, since their formation Nanou Group have built a discourse that focuses on merging image and narration ; in the projects they produced so far, one can find a particular attention for those human conditions at the crossroad between everyday life and the unknown. At the same time, their work starts from the nature of language, creating texts that can be perceived but never acquire any verbal form, thus making words superfluous.

Motel Project starts in 2008 and evolves in three stages or performative situations through which the concept takes form: Prima stanza (2008), Seconda stanza (2010) and Anticamera (2011). As the authors themselves declare, Motel is “a unit of time, an equally familiar and deserted place; the room of secrets, lovers, whores, assassins’ sanctuary, the travelers’ rest”, a non-place, as Marc Augè used to say, defined by intimacy and mystery, absorbing the unmentionable story of those who live there, exuding millions of words and illusions in total silence. 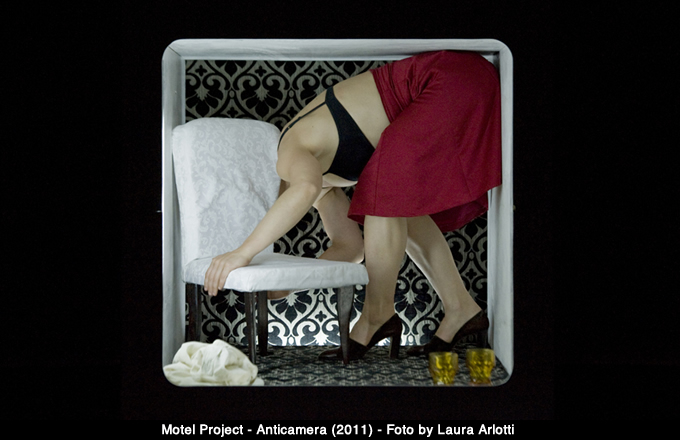 Or even emphasized by sounds and songs as its soundtracks, revealing the cinematographic nature weighting on the place – faithfully rebuilt through the stylistic choice of bare almost minimalists interiors, and decorated by vintage (Prima stanza), or openly kitsch, more colorful and crowded with objects tapestries (Seconda stanza). The entire project is filled with iconographic references from cinema (David Lynch) to photography and painting (Hopper).

Anticamera, the third episode of the series presented at Fèsta was installed in its shorter version (Anticamera Ep). It is a piece that emphasizes the most the movie dimension. Its theatrical language approaches the one performed by the videocamera,even though it is not present on the stage. In fact, the scene is empty, deep, a black space from which emerges a white and empty cube; the performer, with her back against the light, withdraws until she gets swallowed by the squared space at her back. The song chosen for this first movement (the beautiful revisitation of Song to the Siren performed by This Mortal Coil in 1983) confers solemnity to the action and at the same time opens to the most diverse interpretations, dragged to that focus target where all eyes are pointed to, becoming the cinema-eye; that is, becoming an active source in relation to the scene itself.

Inside the box, a sense of expectation takes shape, in the form of a body and a chair, with floral tapestries contrasting the whiteness and the darkness surrounding them. Athletic movements closed into a square meter space, offering different points of view, materialize the imaginary created by that room, making the waiting come true: this is the Waiting Room. The chair lays on a side. Then the dancer appears, tangled up so that the spectator can only see her back or shoulders, the squared frame immortalizing them: this recalls the camera’s ability to circle around the subject-body, almost vivisecting it and examining its movement. It is as if we were in front of a screen assisting to a real film editing: the cube becomes the television set absorbing and imprisoning those who are inside and outside of it.

The dramaturgic effect is amplified by the wise use of lights by Fabio Sajiz, a former light designer for Socìetas Raffaello Sanzio. Sajiz is very skilled in underlining, caressing and hiding objects and bodies. It is thanks to light that the duration of the sequence unfolds: light is projected from behind using backlight, creating lateral cuts that give back visual depth to those spaces that are too small to unveil their verticality; it is projected frontally to cover the whole scene with a bi-dimensional and fictitious gloss. Light transformations become scene changes, a luminous editing of visual dramaturgy, in-between the symbolic and the expressive. These transformations are also pictures from a universe trapped into the impossibility of a progressive action; they are flashes of light whose revelation is left to the imagination of the observers, who do the real work of dramaturgic reconstruction. 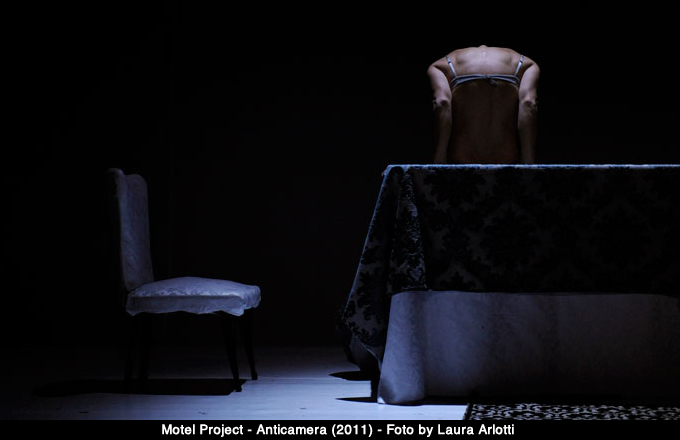 The human figures populating the scene of Motel are entities with no face, running after each other and alternating as the “rooms” composing the trilogy pass by. This depersonalized, shadowy and fragmented character appears in an attempt to overcome the story-character. This character does not symbolize anything in particular, but let the spectator and the light gaze at its epiphany on stage. The darkness and the blackness become evanescent masks, simultaneously hiding any physiognomic aspect yet emphasizing its sense of presence, emerging from the light cuts and the sound that amplifies it.

The scene then becomes the place – a sort of waiting room – where the bodies seem be located at the edge of a barely perceptible existential unrest filtrating through the normality of objects and appearances. It is a liminal scene between truth and fiction: despite the lack of advanced technology, it seems to gather together the different languages of contemporary world. In other words, it suggests a multimediality expressed through scenic echoes.