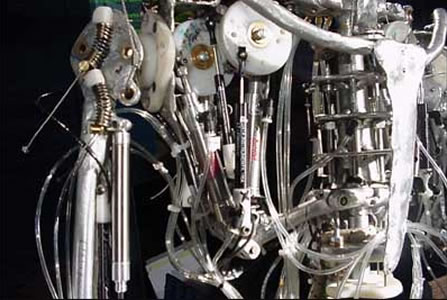 Formed in 1992, ARW is a group of artists, engineers and technicians working together to create robotic performances and installations. Chico MacMurtrie describes his vision, “The work is an ongoing endeavor to uncover the primacy of movement and sound. Each machine is inspired or influenced, both, by modern society, and what I physically experience and sense. The whole of this input informs my ideas and work.”

Since its establishment, Amorphic Robot Works has investigated the nature of movement via the creation of multi-faceted machine-sculptures that play and interact in their uniquely designed environments. This artistic program has resulted in the creation of more than 250 mechanical sculptures of varying size, that assume anthropomorphic and abstract forms. One of the hallmark aspects of ARW’s work is its direct contact with the audience. Rarely does the work appear on stage, behind ropes or behind glass. As the audience for the work has grown in size, so has the work itself. To make performances visible, and yet still physically accessible to the audience, the work has been erected and performed upon integrated sculptures of increasing height. A new generation of permanent work from ARW will completely eliminate the metal and thus, the physically and logistically cumbersome weight.

Humanoid forms will arise from high-tensile inflatable fabric skeletons, formless until air inflates the bones. The possibilities for range and kind of movement, are as broad as that for muscle and bone, but with little of the mass. This new generation of interactive performance sculpture from ARW allows not only for a broader exhibition base, but an interesting new robotic form that does not conform to the standard conception of either ‘robotic’ forms or the existing understanding of kinetic sculpture.