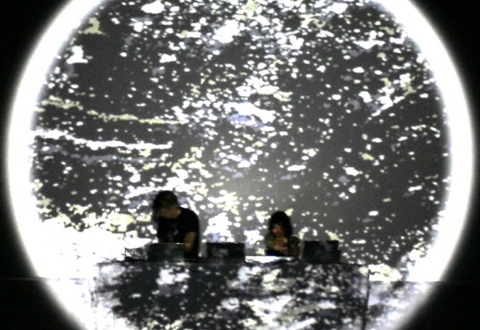 incite/ (Hamburg) is an audiovisual electronic duo formed in 2002 by Kera Nagel (who also has her own solo project called Axiomatic Integration: www.a.i.radylon.com) and André Aspelmeier (who also works as GradCom: www.gradcom.org).

As ExperimentaClub magazine said: “Electrominimalism, digital fragmentation and broken rhythms synchronized with abstract videos of cold and grey environments. The sonorous field of Incite/ appears from a rhythmic subterranean punch, austere and at the same time rich in an enormous variety of shades, that acts as a mattress over which they create a musical spectre (multifrequencies) of wide registers and tones, served in the form of layers of a minimal character that progress gradually through loops and patterns that break constantly. All of it with the additional incentive of the conciseness of their compositions: not very long themes, schematic and direct to the nervous centre of the listener.”

incite/ were awarded three times for their performance: WRO07, 12th international media art biennale Wroclaw, Poland, May 07 – third prize (best performance) ; VAD Festival, Girona, Spain, October 07 – special prize ; 18th International Videofestival Bochum May08 – special mention. As reported on ExperimentaClub magazine again, “with the release of their last album (split-CDR, Authorised Version, 2005), shared with the Dutch Staplerfaher, Incite/ have become one of the most solid proposals of the European microelectronic scene of the last few years. Before they had already published “Minimal Listening” (CDR self-edited, 2003, all tracks performed live) and a 7″ containing the themes “Neop” / “Procedure” (Fragmented Media, 2004). Sonorous works that adjusted during performances to the video images obtain their definite dimension. And besides Incite/ is a project that has paid since the very beginning a special attention to performances, making them so intense that it contrasts with the rational coldness of the sound”. 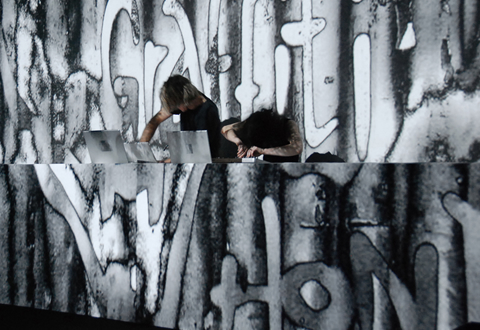 Aside from their work as musicians and videoartists, Incite/ organize concerts of improvised music in the so-called Audiounit Series (www.audiounit.gradcom.org) and as part of the Hörbar collective (www.hoerbar-ev.de), meeting point for musicians and audience of the electronic, electroacoustic and industrial music scene at Hamburg.

MCD: How would you describe your approach and your artistic field?

INCITE/: audiovisual live electronics, or, more pointedly: fragmented grayscale electronics. The basic approach remains identical since the beginning of incite/ early 2004: electronic grooves, noisy and distorted, much base, the music tightly synchronized to more or less grayscale visuals. The early tracks were more experimental, bone-dry sounds of glitches and stuff, the newer tracks are more industrial and groovy, in our point of view danceable. Our main focus is very clearly the live performance as this is the moment where things really get immersive and intense. Over the years, we´ve always tried to elaborate and develop our sets. The musical part has grown to be a bit more accessible without losing the edginess, the visual side at the same time has evolved into something more semi-narrative – not exactly story telling but also not purely abstract anymore. All of these changes we introduced bit by bit, track by track and we´re still far from having finished the exploration of our self defined territory.

MCD: What are your preferred venues for the exhibition of your works? (Museums, theaters, festivals, Internet, tv, clubs…)

INCITE/: In our experience it´s not the kind of venue that makes the difference as long as it´s a live gig, we had great performances in cinemas, galleries, clubs, squads, open air etc. These days, we prefer a standing audience to a seated one as our music is supposed to generate a physical impact in cooperation to the visual one. It’s important to have a good set-up with a big screen and fat sound system. Non-live-media (DVDs to web to TV) lack the physical and immersive aspect that is integral to our shows. Festivals to us are the perfect event for a handful of reasons: first it´s a great way to present our work to a focussed audience, meet other live-artists and see their work.

MCD: Would you agree that your approach or your field of work could be defined by the term “Digital Art”? If you could come up with a different term to describe your art, what would it be?

INCITE/: We´re not so much into defining genres. Surely „Digital Art“ as a generic term sounds OK but doesn´t include our performance focus. A website can also be digital art. Maybe the term „digital performing media art“ is more appropriate? 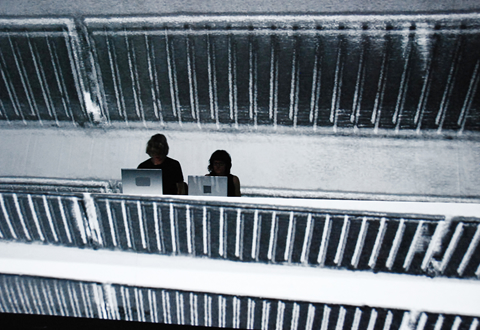 MCD: Are you interested in the conservation of your works or would you rather they keep their ephemeral nature?

INCITE/: Live art is ephemeral by nature and we believe that even the most laborious HD-multi-camera recording cannot reproduce the experience of a concert, neither for us nor for the audience. Recordings of our shows do an important job showing people what we do, giving festival organizers a chance to decide if our stuff fits into their festival concept but we also often realize that a lot of people only fully understand the level of immersion and intensity of an incite/ performance when they see an actual live show. But this is not due to a lack of quality of the recordings usually.

MCD: Do you believe that the traditional ways of mediating art (art critics, exhibition in museums and galleries, funding bodies etc) could meet your needs as an artist?

INCITE/: For our art, the only way to exhibit it is to have us perform it and any performance – as long as the technical conditions match our requirements – is off course a great thing for us. A lot of mediation is done through blogs, online-communities etc which is a much more democratic version of art criticism. When it´s true that everybody is an artist, it´s even more true that everybody is an art critique – with more or less important things to tell ;o) Digital performing media art does not play a key role in the feuilletons of the mass media today, partly due to it being to new to have been discovered by the media people and partly due it being to specifically focussed for being adopted by a mass audience, even though we believe it´s going to receive a much wider adoption in the foreseeable future. Until then, art funding, like Arcadi does, is vital for the development of the young art form.