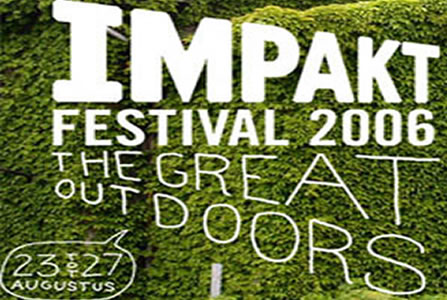 The Impakt Festival is an international manifestation: installations, film, video, fine arts, new media, music and live performances. Each year there are several thematic programs, as well as an expanded panorama program. The thematic program will focus on current artistic developments and put them in a broader, social or historic perspective. The panorama program each year presents a general overview of the most idiosyncratic and exciting film and video works. Every year about 125 installations, videos, websites, films, performances, cd-roms and concert from approximately 30 different countries around the world are on display. Interviews and discussions are held every day in the couch.club, where artists introduce their work.

This year, the Impakt Festival takes place in August for a change. We have included many outdoors activities to give the festival a real summertime feeling. You can barbecue every evening at the AV-BBQ, while some remarkable films are being screened in the open air. In the Floating Cinema, you can watch films while floating through the canals of Utrecht. Every afternoon, there is an Audio Picnic with live music in the garden of the Centraal Museum. Apart from all these outdoor projects, the Impakt Festival will also include the first Dutch solo exhibition of the Swiss artist Olaf Breuning. The visual artist Hans Op de Beeck from Belgium will give a general overview of his works in two film programs. A number of film programs will draw attention to street art. The music program will be varied as ever, including not only breakcore, dubstep and minimal techno, but also a performance by the Englishman Phillip Jeck that will serve as an accompaniment to the old Soviet film Battleship Potemkin. The slightly weird Apparat Organ Quartet from Iceland will give a concert on the opening night. On Friday, Impakt will focus on minimal dance music, which is currently on its way up again, thanks in part to the re-releases of the Säkho label from Finland and live performances of Sleeparchive and Pansonic. To top it all, the Feed project by Kurt Hentschläger from Austria will immerse visitors in a unique audiovisual experience they will not easily forget.