The medium is the medium. Interview with Metahaven

Given the wide variety in terms of means and themes of their many projects, to find recurrent features among the works by Amsterdam-based studio Metahaven could seem a hard task, but we can state that if there’s a lowest common denominator, that’s the need expressed by the Dutch duo Vinca Kruk and Daniel van der Velden to actually take action in recent political and social questions rather than offering mere comments.

Some the most notorious examples of this mission is their collaboration with WikiLeaks, for which they made scarves and T-shirts to modify their visual presence, the re-branding of the self-proclaimed Principality of Sealand (http://www.sealandgov.org/), a fortress island founded as a sovereign Principality in 1967 in international waters, seven miles off the eastern shores of Britain, and the work on Icelandic Modern Media Institute (IMMI) visual identity.

In their hands, graphic design reveals itself as what sometimes we forget it is, namely a power tool that can and indeed does change opinions, behaviours and states of things. This is one of the many themes they inquired in one of their most recent works, The Sprawl (Propaganda About Propaganda) (2016), screened at Transmediale 2017 on Saturday 4th February. 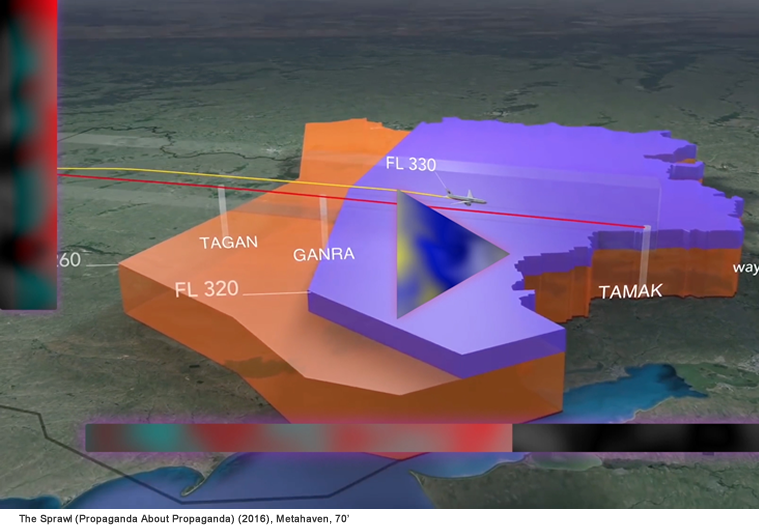 Recent publications include ‘Black Transparency’ (2015), ‘Can Jokes Bring Down Governments?’ (2013), and ‘Uncorporate Identity’ (2010). Music videos by Metahaven include ‘Home’ (2014), and ‘Interference’ (2015), both for musician, composer and artist Holly Herndon, as part of an ongoing collaboration. Metahaven’s first full-length documentary, ‘The Sprawl (Propaganda about Propaganda)’, premiered at the International Film Festival Rotterdam in 2016. Its successor, a short film titled ‘Information Skies’, was shot and edited in 2016.

Since Metahaven was founded in 2007, it has been awarded many times; it was a finalist for the Dutch Design Awards 2012, it was awarded the bi-annual Cobra Art Prize 2013 and in the same year “Icon” magazine distinguished it with its Design Studio of the Year 2013 award. 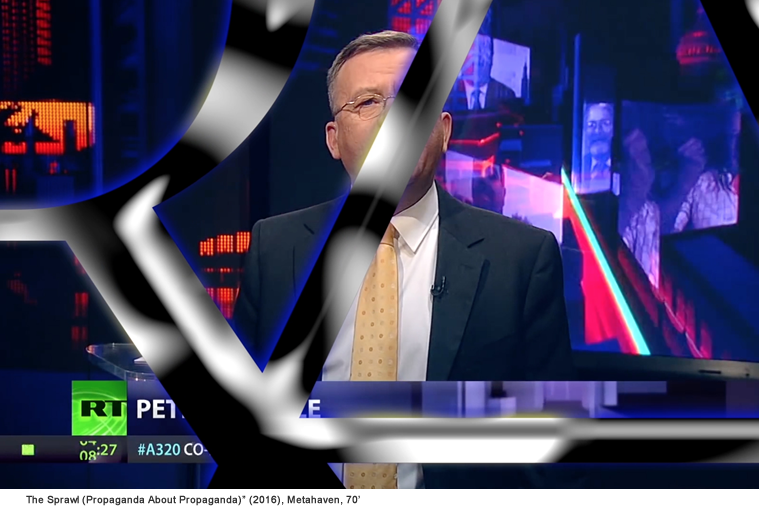 Filippo Lorenzin: The Sprawl (Propaganda About Propaganda) is a work conceived and produced between 2014 and 2015, or, in the internet terms, ages ago. It’s very easy to find connections between what you addressed and the most recent hot topics – alternative facts, marketing-driven social bubbles, subtle propaganda strategies are among the questions debated on a daily basis by a diverse group of people, namely academics, journalists and anyone else interested in politics and digital culture. What is the targeted audience of this project? You presented it in many various ways, as a five-channel museum installation, a YouTube channel and a website all over the world and it seems to me that they all have been designed to speak to a specific kind of person – namely, someone who already knows what you’re going to talk about.

Metahaven: We don’t have that feeling. The film is not about educating people about propaganda. It is a film about a film being its own medium within hyper-ideological interfaciality. Meaning that the interface itself is so much part of the film’s message. After the screening at Transmediale someone said that the way in which in the film uses layers and subtitles and smoke is an approach that is inherent to the subject matter, and we thought he had a point there. The film is about its own visual method.

Filippo Lorenzin: I’m not just referring to contents and opinions, but also graphics and aesthetics – what you define as “interfacial ruins”. Since The Sprawl (Propaganda About Propaganda) is, among many other themes, focused on the spread of propagandistic strategies in every level of human communication, I wonder what is your position on the role of experts and design education. If propaganda hides part of the content in order to achieve a more striking effect, can we distinguish between it and any advertisement or communication

Metahaven: Yes and no. The point of an advertisement is that it often appears in a designated space that tells you how to treat it. The point of propaganda is that it doesn’t. The category of news is, in and of itself, memetic already. “News” as a word is, even without any specific content or medium, a category of that which gets spread. The waves of news come like ebb and flow and follow a natural rhythm and creators of propaganda have to work with these tides, they have to know when to broadcast but also when to suddenly be silent. Sun Tzu has more on that.

The objective is, among other things, occupation of time instead of space. When we are going to a museum or cinema we are more or less voluntarily giving up our time to experience something that’s not ours and of which we have no idea whether it will help us further or not. On YouTube by contrast, we are often not making such a clear choice; we’re simply being drawn in, and our moving of the playhead directly from start to end compresses plots into milliseconds, occupies our timeline even more because we refuse to experience duration as a cognitive act. 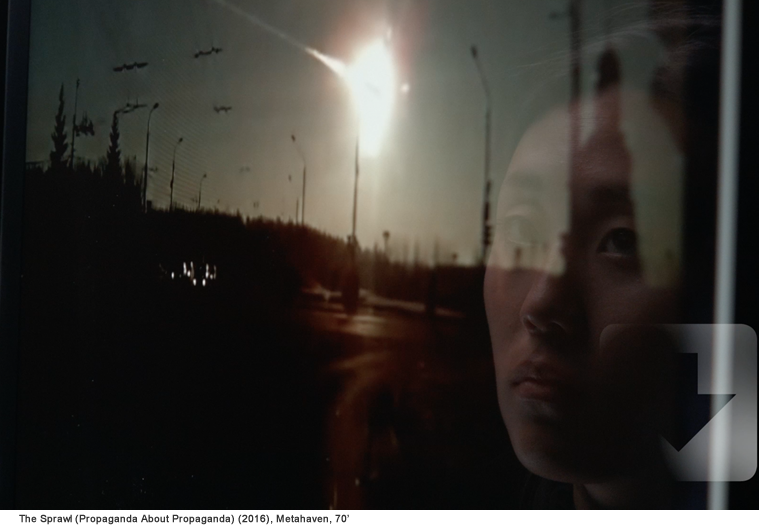 Filippo Lorenzin: It’s clear you can define “propaganda” whatever you want and that depends on your opinions about who you think you are, your values and what you stand against – this is what the whole “filter bubble” discussions were about, after all. The role of designers is crucial because they don’t merely have to mediate between a content and the audience, but also and foremost between the needs of commissioners and audience. What do you think?

Metahaven: This is not about mediation between commissioner and audience. When a number of years ago the Gap, a US clothing company, changed their logo, there was an outrage, and literally no one thought, “oh this is a designer mediating or facilitating a direction change in perception of a brand or helping with the needs of the audience.” People just wanted the old logo back: the stretched serif capitals.  The point of propaganda is not that it is designed on behalf of someone with certain needs in mind; it appears spontaneously and inevitably. Let’s take Kelly-Anne Conway’s recent MSNBC interview and her reference to a terror attack she invented on the spot, the so-called “Bowling Green Massacre.” What we get is a rare peek into the mindset that cooks fake news.

Susan Schuppli after the transmediale screening pointed at a Hannah Arendt text where she locates the source of “lying in politics” in the imagination, which doubles as the origin of art. Our film cites Tolstoy’s What is Art? — an essay he wrote very late in his life, and which subsequently brought him to produce an essay about non-violent resistance. In that essay, Tolstoy describes an encounter with a wolf, which the narrator could have experienced in reality, or invented.

For the narration to be art or not for Tolstoy depended on whether it made the listeners share the same feeling as the narrator had, even if (s)he had invented the story. The way in which Tolstoy tells it is itself already art. Kelly-Anne Conway’s story is powerful enough to become a meme but that’s purely because she’s the narrator. The lack of texture to it means she hasn’t understood. So we’ve witnessed a nascent moment of fake news without texture or character. 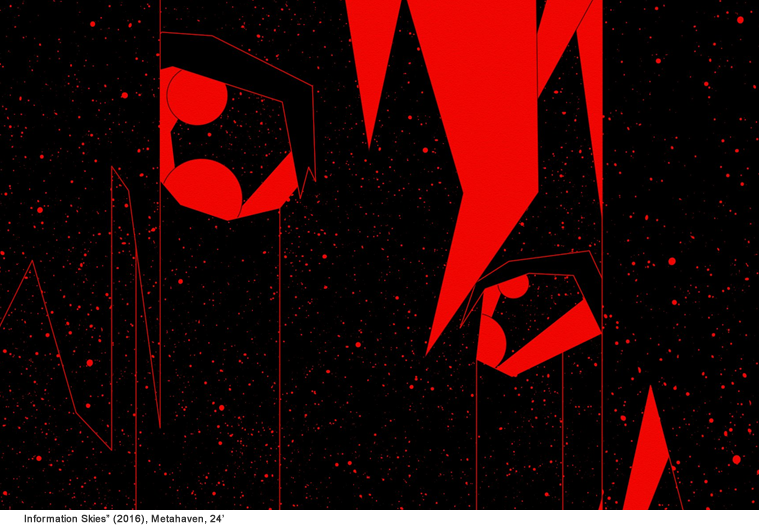 Filippo Lorenzin: The interfacial ruins, the coloured geometric shapes that can be found in many of your works, play an important role in The Sprawl. They don’t just frame the contents but become contents themselves; it’s not an easy job to watch the videos without lingering on them and how they interact with what they’re overlying. “Interfacial ruins” is a fascinating definition that makes these abstract shapes in relation to the old Western passion for obsolete structures reminding the glory or the weakness of past civilisations; the production of fake ruins, or artificial remains, is evidently related to The Sprawl’s inquiries on the perception of history and human relations. I wonder what’s your position in relation to the meaning of interfacial ruins; do they constitute a baroque memento mortis rather should inspire future imaginative potentialities?

Metahaven: Sedimentation, geography, geology, platforms and interfaces are themes in our work. Ruins become interfaces, interfaces become ruins. An interface, overlaying, or commenting, or obscuring other visual tropes like cinematic film, is important not so much by itself but exactly in this sense of a combination of different visual and propagandistic regimes and belief systems working with and against each other. 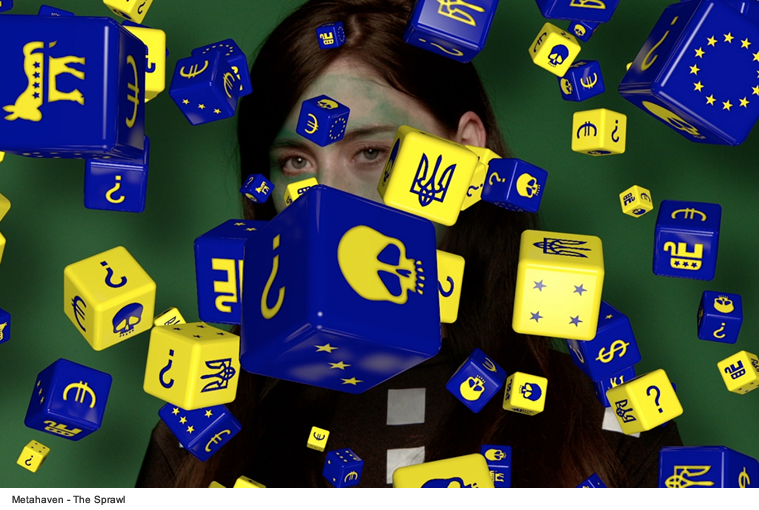 Filippo Lorenzin: The need to question what is the nature of what we are made to perceive can be noticed in many works you made in these years, but Information Skies (2016) is a project that stands out among the others and that you described as the sequel to The Sprawl (Propaganda About Propaganda). How these two projects relate to each other? Do they speak to the same audience?

Metahaven: We wanted to give The Sprawl a fictional sequel working with some of the same cast and crew. The same lead actress, Georgina Dávid, and the same director of photography, Remko Schnorr, were involved. In The Sprawl (Propaganda About Propaganda) we often saw Georgina with Russian narration, but for Information Skies we decided to translate the script into Hungarian, her native language, and let that be the language of the film that she also narrates. Information Skies contains anime-like animation sequences, which is a continuation from The Sprawl’s citations from Nyash Myash and other anime clips.

The language is more personal, more emotional, less working from a documentary perspective, but the subject matter is the same: a search for the nature of reality, for now, and in the future.