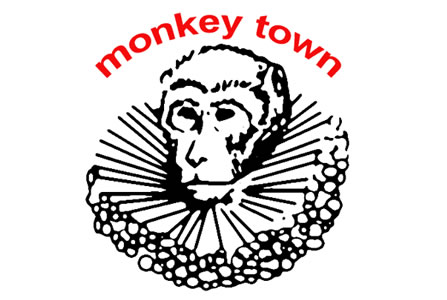 Harkness A/V selects an evening of multisensory performance featuring work by Bradley Eros, Ray Sweeten and the duo of Zach Layton and Chika

These artists combine electronic sounds and projections from a variety of ‘alternative cinema’ sources to create an immersive media environment, maximizing Monkey Town’s quadravisual screening system. For those out there who miss the ‘chill-out room’ era, this event should be for you…

Ray Sweeten will present, specifically for Monkey Town, a piece for four oscilloscopes. An oscilloscope is an analog instrument that graphs the flow of electrical impulse on an x and y axis. Though its main applications are in scientific research, Ray uses the ‘scope to visualize
compositions of sweeping electronic sound, creating sculptural Lissajous patterns and tesselations that seem to journey into the beyond. Ray has presented his oscillographic work at The Kitchen, Ocularis, PS122, and the Roberta Beck Memorial Cinema.

Bradley Eros uses the medium of cinema to evoke primal, biological forms: fire, water, undulations of microscopic life, and the systems of the human body. His experiments with color liquid projection and the decomposition of celluloid have led him to a unique aesthetic of ethereal and sensual beauty, which are most often accompanied by haunting sound collages (also Bradley’s doing). He is the founder of the Robert (now Roberta) Beck Memorial Cinema, hosted by Participant Gallery and was featured in the Whitney Museum’s 2004 Biennial.

Zach Layton and Chika will perform their celebrated “alpha wave” collaboration. Zach generates a variety of sine waves at barely audible, “fundamental” frequencies. When combined, these sounds create ‘acoustic beats,’ rhythmic pulses that exist in the spaces between cycles of differing acoustic waveforms. Zach’s organic rhythms are harnessed to modulate the geometric visuals of digital video artist Chika, whose kinetic patterns of concentric circles and DNA-like forms evoke the pioneering computer animations of James Whitney. Their collaboration has been performed at “Becoming” events for Roberta Beck Memorial Cinema and Millennium Film Workshop, and (of course) at Harkness A/V Salon.

Curator and musician Nick Hallett is the founder of Harkness A/V, a collaborative multimedia project to promote the germination of ideas among audiovisual artists, culminating in a regular “salon” at Secret Project Robot.