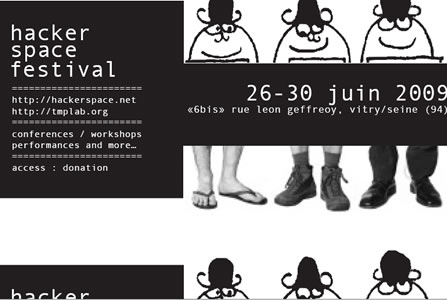 The second Hacker Space Festival (HSF) will be held at the /tmp/lab in Paris, on the 26-30 June 2009. The goal of the Hacker Space Festival is to bring together people from many cultural and technological backgrounds and from different Hacker Spaces and Autonomous zones in France and Europe (and from beyond, if they can attend) to share and show what’s going on

In 2008, HSF was organized on the spot, as an ad-hoc meeting for hackerspaces-related networks, technical and artistic research emerging from them and social questionning arising from them. This sudden experiment proved to be a huge success, as much as on the self-organizing level as on the participants and meetings quality, as well as the emotionally-charged ambient, the kind of which you make fond memories.

The 2008 edition generated a strong emulation in France, from its historical role as the first official hack meeting there, and in Europe with the subsequent creation of the Hacker Space Brussels, the rapprochement with The Fiber in Amsterdam and the hackerspaces.org network. Initiatives of hackerspace openings in Grenoble or Lille, or
the upcoming FrHack conference show an actual enthusiasm in the French hackers community that was doomed to the “underground” not so long ago. We salute these initiatives and their diversity!

Soon enough, the HSF experience had to reiterate : however, it was out of the question to institutionalize this temporary autonomous zone, nor make it an ersatz of the previous edition, nor even to wrap it into an “elite” or “underground” aura. On the opposite, we ardently desire; and especially to explore further, in all directions some
lesser known domains (see below) et foster meeting and sharing around experiences at the confluence of art, technology and politics. 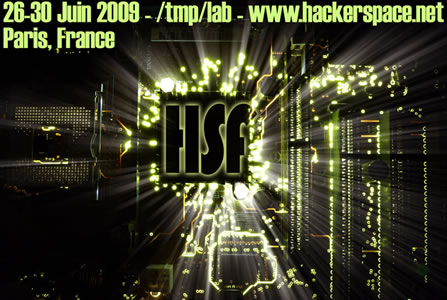 The world financial crisis, the decay of democracy in Europe, the obscurantism, paranoia and lack of culture presiding over legislation (Internet and Reaction… Err… Creation Law) seem a fertile environment for the sensible development of new (social…) life forms. Quick! Let’s rest for a few days in jubilation and ecstasy to take a
deep breathe of freedom under the indelicate smells of the medicine factory nearby!

For if the public space is shrinking to oblivion, where any side-step becomes suspect, and that, from an early age (deviant behavior detection in nursery school), where moving without a mobile phone becomes suspect (hello you Julien Coupat, a French political prisoner in France!), there’s a domain that the Leviathan would have a
lot of trouble to contain, and for a reason: that of sensitivity. Even the desperate attempts of the State to block the free and premonitory expression of sense (hello you Demeure du Chaos!) cannot do anything against a loud laughter or a knowing glance, a sensual kiss or an explosion of colors.

Sensitivity, we could say, is what is left to a human being when she has nothing anymore, and differenciates her from the body corporate or the institution, that are, in essence, devoid of it. Therefore, Art definitely remains the public space to share between humans, and only between us.