Glitch Momentum. An exhibition at Furtherfield curated by Rosa Menkman 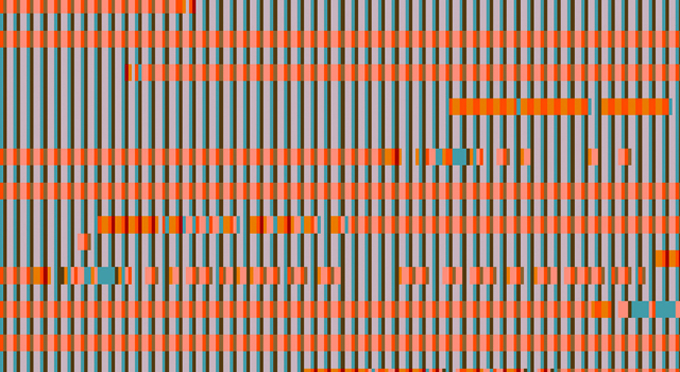 “The glitch makes the computer itself suddenly appear unconventionally deep, in contrast to the more banal, predictable surface-level behaviours of ‘normal’ machines and systems. In this way, glitches announce a crazy and dangerous kind of moment(um) instantiated and dictated by the machine itself.” [1] – Rosa Menkman

Glitches are commonly understood as malfunctions, bugs or sudden disruptions to the normal running of machine hardware and computer networks. Artists have been tweaking these technologies to deliberately produce glitches that generate new meanings and forms. The high-speed networks of creation and distribution across the Internet have provided the perfect compost to feed this international craze.

The exhibition shows various approaches by artists hacking familiar hardware and their devices which include mobile phones, and kindles. They disrupt both the softwares and the digital artefacts produced by these softwares, whether it be in the form of video, sound and woven glitch textiles.

Glitch art subverts the way in which we are supposed to relate to technology, causing playful, imaginative disruptions. It is a low-tech and dirty media approach with a punk attitude. These artists appropriate the medium and forge expressions that go beyond what the mainstream art world expects artists to do, it is unstoppable – it is Glitch Moment/ums. 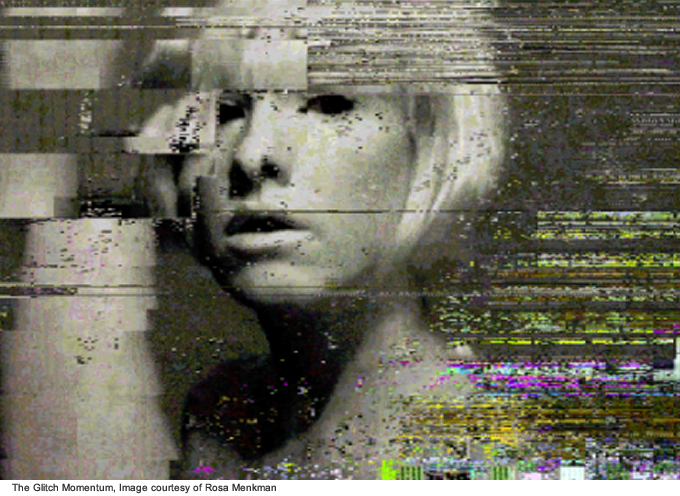 What Revolution? (2011) by Antonio Roberts

Glitch artists and enthusiasts are invited to add their work to GLI.TC/H 0p3nr3p0.net, a Glitch Art repository coded and developed by Joseph ‘Yølk’ Chiocchi & Nick Briz. The submissions will be showcased during Glitch Moment/ums at Furtherfield Gallery. To include your work in the 0P3NR3P0 component of Glitch Moment/ums submit a link to any visually wwweb based file (html, jpg, gif, youtube, vimeo, etc.) and your piece will automatically be included in the line-up (one work per artist). This new IRL exhibition has been organised in collaboration with Nick Briz and Joseph ‘Yølk’ Chiocchi. SUBMIT && SHOW on 0P3NR3P0.NET.

Alma Alloro is an artist, musician and performer from Tel Aviv. She is rooted in the backyard of popular culture using diversified media from drawing, installation, music, and animation to internet; her recent works focus on the correlation between new media and old media.

Melissa Barron is an artist living and working in Minneapolis, Minnesota. She studied at the School of the Art Institute of Chicago where she focused on new media and fiber. In her work she combines these two fields by reinterpreting hacked Apple 2 software through different fiber techniques. Her work has been shown at various international events, including the Notacon hack festival in Cleveland, Ohio, GLI.TC/H in Chicago and ISEA 2011 in Instabul.

Nick Briz is a newmedia artist, educator and organiser based in Chicago IL. His work has been shown internationally at festivals and institutions, including the FILE Media Arts Festival (Rio de Janeiro, BR); Miami Art Basel; the Images Festival (Toronto, CA) and the Museum of Moving Image (NYC). He has lectured and organized events at numerous institutions including STEIM (Amsterdam, NL), the Museum of Contemporary Art Chicago, Marwen Foundation and the School of the Art Institute of Chicago. His work is distributed through Video Out Distribution (Vancouver, CA) as well as openly and freely on the web.

Benjamin Gaulon is an artist, researcher and art college lecturer. He has previously released work under the name “Recyclism”. His research focuses on the limits and failures of information and communication technologies; planned obsolescence, consumerism and disposable society; ownership and privacy; through the exploration of détournement, hacking and recycling. His projects can be softwares, installations, pieces of hardware, web based projects, interactive works and are, when applicable, open source. 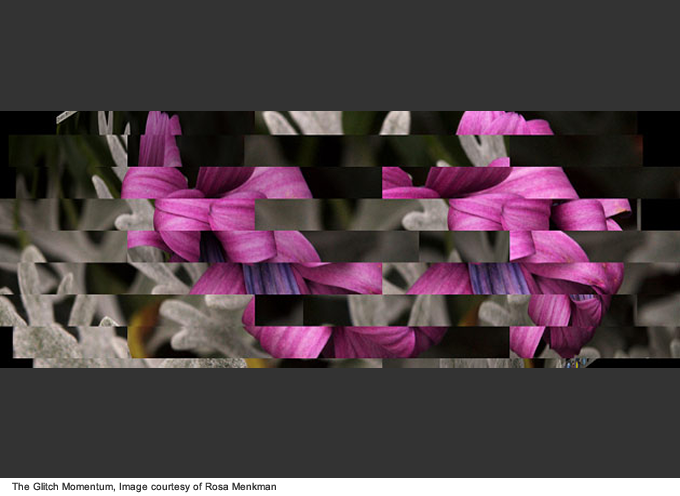 José Irion Neto is native of Santa Maria, in southern Brazil. His first contact with computers was in 1982 using a machine equivalent to Sinclair ZX Spectrum. He has an academic background in Media Advertising and worked for some years as a Graphic Designer. Today, he has been working with advertising only occasionally, focusing on creating posters, dedicating most of his time on developing Glitch Art. He has worked and researched Glitch since 2008.

Antonio Roberts is a British digital artist whose artwork focuses on the errors and glitches generated by digital technology. Many people would simply discard such artefacts but Antonio preserves these errors and displays them as art. With his roots in free culture he develops his techniques using open source and freely available software and shares his knowledge through the development of software.

Rosa Menkman is a Dutch visualist who focuses on visual artifacts created by accidents in digital media. The visuals she makes are the result of glitches, compressions, feedback and other forms of noise. By combining both her practical as well as an academic background, she merges her abstract pieces within a grand theory artifacts (a glitch studies), in which she strives for new forms of conceptual synthesis of the two. In 2011 Rosa wrote Glitch Moment/um, a notebook on the exploitation and popularization of glitch artifacts (published by the Institute of Network Cultures), organized the GLI.TC/H festivals in both Chicago and Amsterdam and co-curated the Aesthetics Symposium of Transmediale 2012.

Co-founded by Ruth Catlow and Marc Garrett in 1997, Furtherfield provides platforms for art, technology and social change. Furtherfield is now a dynamic, creative and social nerve centre where upwards of 26,000 contributors worldwide have built a visionary culture around co-creation – swapping and sharing code, music, images, video and ideas. Furtherfield Gallery, formerly HTTP, has established an international reputation as London’s first dedicated gallery for networked and media art, hosting regular exhibitions and public events since 2004. With the support of Haringey Council the gallery is now based at McKenzie Pavilion in the heart of Finsbury Park.