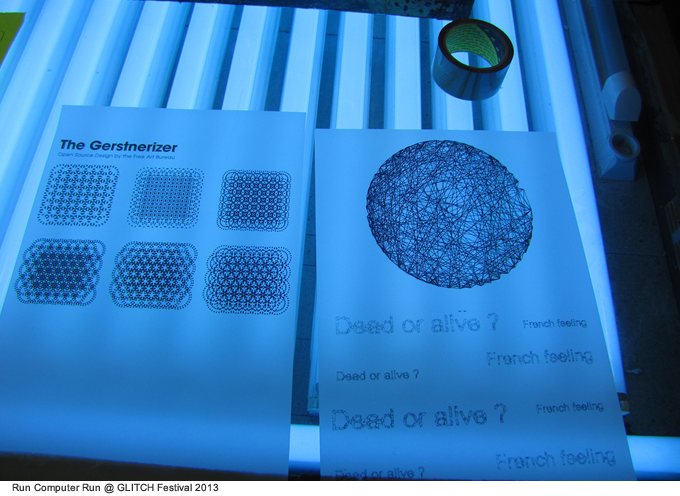 Run Computer, Run @ GLITCH 2013 is an arts festival focused on examining artistic responses to cultural, economic and social factors that currently affect the evolution of the Internet.

The festival features four exhibitions, eight workshops, a symposium featuring leading thinkers and curators in the field of New Media Art, and a showcase of short films. It will wrap up on July 13th with a party featuring live performances by Irish musicians Voids, Replete & Richie K!, with more acts to be announced.

Now in its third year, GLITCH is an opportunity for the public to engage with new art in an exciting and innovative way. With a huge range of events and a programme of exhibitions involving internationally renowned artists including Casey Reas, Marius Watz, FIELD, Pixel Noizz, Constant Dullart and Evan Roth, this yearʼs GLITCH festival is the most ambitious, and largest, to date. 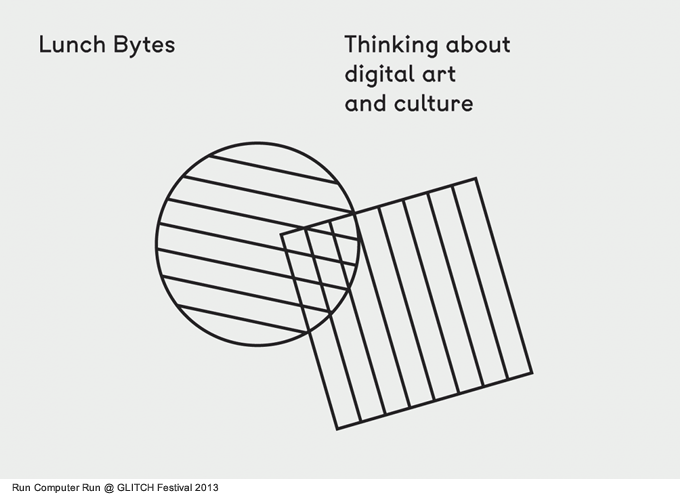 ECONOMICS AND THE IMMATERIAL features 30 international artists whose digital artworks can be viewed and interacted with on a specially designed website, as well as in the accompanying gallery based exhibition. You can view the AR (augmented reality) markers on the gallery wall by using your own Smart phone or a computer tablet provided by the gallery.

EXAMINING AESTHETICS examines how artists have been influenced by a digital way of seeing.

BEYOND THE WHITE CUBE questions how art made for the Internet can be transformed for a gallery context.

REMAINING ANONYMOUS explores identity, and the importance of preserving anonymity in a digital age.

IT TALLAGHTʼS CREATIVE DIGITAL MEDIA SHOW will feature work in a variety of disciplines ranging from video, interactive media, photography and radio production.

Oh Internetz! Is a showcase of some of the best international and contemporary work in motion graphics, animations and shortʼs.

The workshops hosted during the festival are open to the public and include a broad span of exciting new media and digital subjects, including:

– Avatar – A Shareable, Makeable, Physical, Papercraft version of your digital self 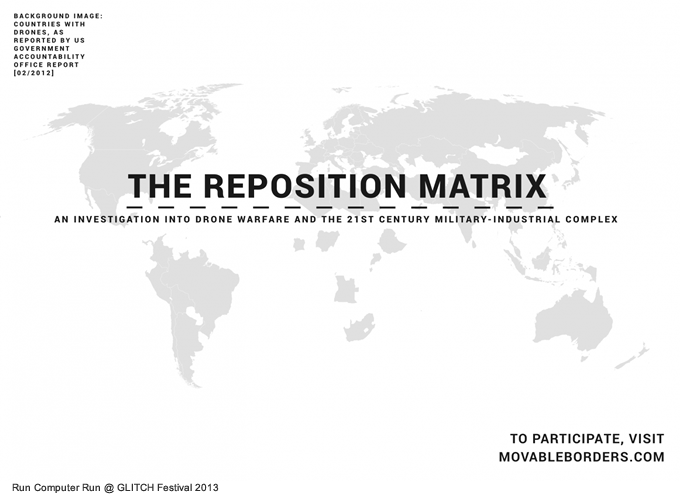 The GLITCH: Run Computer, Run Symposium is an in-depth dialogue between leading curators and artists in the field of New Media Art, facilitated by Festival Curator Nora O Murchú.

Beryl Graham is Professor of New Media Art at the School of Arts, Design and Media, University of Sunderland, and co-editor of CRUMB. She is a writer, curator and educator with many years of professional experience as a media arts organiser, and was head of the photography department at Projects UK, Newcastle, for six years. She curated the international exhibition Serious Games for the Laing and Barbican art galleries, and has also worked with The Exploratorium, San Francisco, and San Francisco Camerawork.

Sarah Cook is a curator and writer based in Newcastle upon Tyne, UK and co-author (with Beryl Graham) of the book Rethinking Curating: Art After New Media (MIT Press, 2010) and co-editor (with Sara Diamond) of Euphoria & Dystopia: The Banff New Media Institute Dialogues. She is currently a Reader at the University of Sunderland where she co-founded and co-edits CRUMB, the online resource for curators of new media art and teaches on the MA Curating course. She is a member of the advisory board of the Journal of Curatorial Studies and co-chaired Rewire, the Fourth International Conference on the histories of media art, science and technology with FACT in Liverpool (2011).

Marialaura Ghidini is a curator and writer. For her PhD with CRUMB, she is researching in the field of online curating with a specific interest in the theory and practice of artists and curators operating through web-based platforms and in between the online and offline dimensions. She is founder and director of the web-based curatorial platform or-bits.com, a project devoted to promoting practices and dialogues across and beyond media and exploring the creative and critical possibilities of the web as a language, medium and subject. Since 2010 Marialaura has been co-curator at Grand Union (Birmingham), for which she has organised the residency programme Search Engine (2011) and a series of collaborative projects, ranging from group shows to sound events and performances.

Nora OʼMurchú is a curator and designer. Her research explores experimental approaches to curating new media art, and examines current economic, political and cultural factors that are shaping networked culture, and the artistic responses to them. She is the curator of this yearʼs
GLITCH.

Suzy OʼHara is an accomplished curator and arts producer with extensive experience in thedevelopment and delivery of time based, large scale, complex and high profile arts festivals, events and digital arts commissions. Suzy is also a full time PhD student researcher at CRUMB(University of Sunderland) where she is exploring the impact of pervasive convergent technologyand media on the production, dissemination and consumption of art. 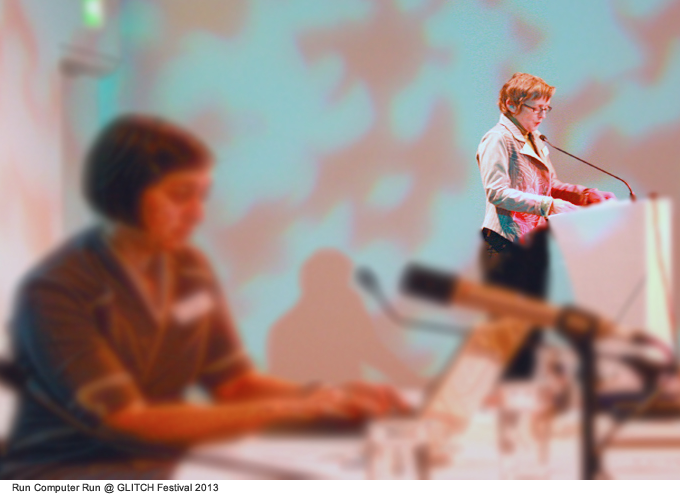 RYBN.ORG is an extra-disciplinary artistic research platform, funded in 2000 as a web entity, disseminated into several servers all over the Internet and physically present in Paris, Montréal, Berlin and Bruxelles. RYBN.ORG operates through interactive & networked installations,
digital/analog visual cross-performances and pervasive computing. Their projects refer as well to the codified systems of the artistic representation (aesthetic, painting, architecture, avant-garde, music) as to the socio-politic and physical phenomenons, exploring various fields such as
economics, data mass analysis, perverted artificial intelligence, disrupting auto-learning, language and syntaxes, sensory perception and cognitive systems. Their work have been shown in numerous contemporary art exhibitions and media art festivals, such as Ars Electronica,
Transmediale, ISEA, Elektra, Cellsbutton, and museums and institutions like the ZKM, LABoral, le Centre Pompidou, La Gaîté Lyrique, ZKM.

Melanie Bühler holds an MA in History from the University of Zürich, specializing in the historical transformation of visual culture in a national context. After completing her studies, she worked as a production assistant for film and exhibition projects, and was cultural coordinator at
the Goethe-Institut Amsterdam and, subsequently, the Swiss Embassy in Washington D.C. As a freelance curator based in Amsterdam, she is responsible for Lunch Bytes – a project on digital art and culture including talks, discussions and an online platform Lunch-Bytes.

Nicholas OʼBrien (b. 1985) is an accomplished artist, writer, curator, and education who primarily lives and works online. After receiving his BFA from The School of the Art Institute of Chicago, OʼBrien was an active participant in the local Chicago New Media community as an exhibition curator and events organizer. During this time, he also taught media theory at Columbia College in the Interactive Arts and Media department. OʼBrienʼs work has been internationally shown and published in venues like the Museum of Moving Image, the Museum of Contemporary Art Chicago, The Portland Art Museum, ARTINFO, The Creators Project, The Brooklyn Rail, Frieze d/e, and the New York Times. Recently he has premiered a new collaborative work at the Baryshnikov Art Center in New York and a curatorial project mounted at the Arti et Amicitiae in Amsterdam.

Bani Bruscadi is a freelance producer and researcher in the troubled water where art, digital technologies, popular cultures and politics clash. In 2004 he co-founded The Influencers, a small cult festival about non-conventional forms of art and communication, whose 9th edition will take place in Fall 2013 at the Center of Contemporary Culture of Barcelona. Bani is currently a freelance professor of Technology, Interaction and Society at Elisava Design School (Barcelona), Exhibition Formats at the Art Curatorship and New Media master at Esdi (Barcelona) and Radical Communication at IAADʼs Advanced Interaction master (Barcelona).