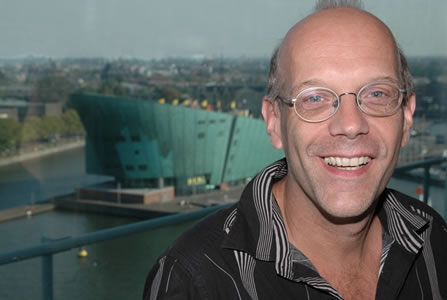 The emerging new media arts genre is in a crisis. Not that ‘new media’ are on their way out. What we’re talking about here is a `luxury´ problem: in what direction to grow futher. After an initial period in which time and again the question “What is new media?” was raised, we have now moved to a second phase, in which large parts of the population have become familiar with multimedia, cell phones and the Internet. However, new media arts still operates in a self-referential ghetto, dominated by techno-fetishism.

Meanwhile, the world at large has moved from utopian promises about virtual reality and cyberspace to a culture of massive use. Taking this ‘democratization’ of new technologies in mind, what are the implications of this shift for the ‘electronic arts’ branch? Should new media artists and their (few) institutions seek collaboration and integration with the museum and gallery art? Should new media remain a seperate category, with its own festivals and exhibiti! ons, or be integrated into the broader field of ‘contemporary art’? Or should we rather further institutionalize the new media discipline?

Geert Lovink (NL/AUS) is a media theorist and activist and Internet critic and author of Dark Fiber, Uncanny Networks and My First Recession. He worked on various media projects in Eastern Europe and India . He is a member of the Adilkno collective and co-founder of Internet projects such as The Digital City, Nettime, Fibreculture and Incommunicado. He is founder and director of the Institute of Network Cultures , professor at Interactive Media (Hogeschool van Amsterdam) and associate professor at the Media & Culture department, University of Amsterdam. In 2005-2006 he was a fellow at the Berlin Institute for Advanced Study.