Gaming at the intersection of art and technology 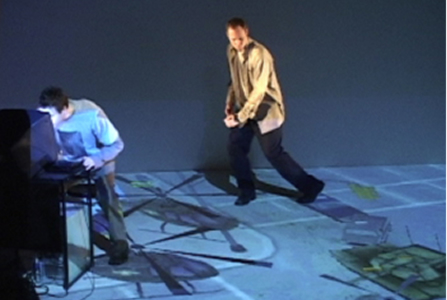 Several University of California faculty who see and make art through the prism of play in computer gaming are represented in a new-media art exhibition at the University of California, San Diego. The show Playing the World(s) opens to the public on Friday, January 23 in the gallery@calit2, part of the UC San Diego division of the California Institute for Telecommunications and Information Technology (Calit2). The launch coincides the same day with a discussion with the artists at 5 p.m., and a reception from 6-8 p.m.

The exhibition will run through Friday, March 13, 2009. It is part of a wider series, Scalable Relations , which is showcasing the new-media art works of UC faculty.  The exhibitions are being staged on different UC campuses in the first quarter of 2009, organized by the UC Digital Arts Research Network (DARnet). In addition to the gallery@calit2, other venues are at UC Irvine, UCLA and UC Santa Barbara.

“All the exhibits in “Scalable Relations” series illustrate the complexities and shifting contexts of today’s information society,” said curator Christiane Paul, an Adjunct Curator of New Media Arts at the Whitney Museum of American Art. “The format of the exhibition itself, in its distribution across multiple venues, mirrors the relational theme and the inherent connectivity of the digital medium.”

“Playing the World(s)” brings under one roof three new-media installations that expand the usually confined simulated world of a game to the real world. The projects in the San Diego exhibition – Robert Nideffer’s “WTF?!” , Antoinette LaFarge’s and Robert Allen’s “Playing the Rapture (Point of View)” , and Gregory Niemeyer’s “CO2 Playground” – either use paradigms of gaming and play for understanding phenomena and concepts that shape the physical world, or they incorporate real-world concepts that are rarely encountered within a commercial game. 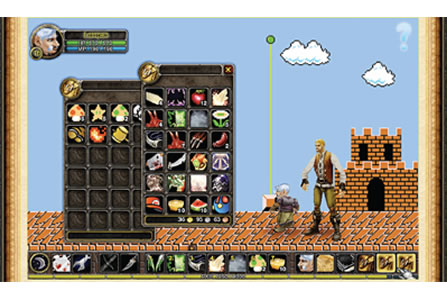 Over the past decade, computer games have become a fertile ground for artistic exploration in new media art, and the projects in Playing the World(s) expand on the narratives as well as cultural, philosophical and environmental concepts that have emerged in online virtual worlds.

Robert Nideffer is a professor at UC Irvine where he is affiliated with the UC Irvine division of Calit2. His work, “WTF?!” , in collaboration with Alex Szeto, is the most overtly game based of the three installations on display in the gallery@calit2. WTF?! references the aesthetics of the medieval game world and quest from the popular massively multiplayer online role-playing game, World of Warcraft (WoW). But Nideffer’s WTF?! departs from WoW ‘s underlying assumptions and introduces characters and concepts of the historical ‘real’ world, including Karl Marx, Sigmund Freud, Albert Einstein and feminist theologian Mary Daly. The work frames quests in a way that subtly unveils and questions some of the assumptions of its commercial counterpart.

The installation “Playing the Rapture (Point of View)” is based on an original performance by Antoinette LaFarge and Robert Allen, which premiered at the Baltimore Theatre Project last March. LaFarge is an Associate Professor of Digital Media at UC Irvine, and she has created several mixed-media works with director Robert Allen. The Playing the Rapture project uses gaming concepts to explore the American evangelical belief in the Rapture-a moment when true Christians will leave the earth while the rest of humankind undergoes trials and suffering. The installation combines monitors showing the players in excerpts from the performance as well as projections of machinima videos-movies shot within an actual computer game unfolding in a post-Rapture world.

The gallery@calit2 itself is one of the sensor locations that contribute streams of data to the installation by Gregory Niemeyer, “CO2 Playground“. The project lets visitors observe changes in air quality as they browse live feeds of data from various air-quality sensors. In CO2 Playground , the social principle of play is embedded in the system for collecting and sharing observations about the environment. Niemeyer is a professor of new media at UC Berkeley, which he joined in 2001 after founding Stanford University’s Digital Art Center. CO2 Playground is part of a larger Niemeyer project, Black Cloud, an ‘alternate-reality’ game funded by the MacArthur Digital Learning Initiative.

“Engaging with subjects that range from role-play in a fantasy society to the rules of religious beliefs and the monitoring of the environment, the projects in the exhibition investigate relationships between game worlds and the actual physical, cultural, and social environment that we inhabit,” said curator Christiane Paul. “Using gaming as a formal and narrative framework, the artworks in Playing the World(s) reveal how we perform our lives within a rule set of complex relationships.”