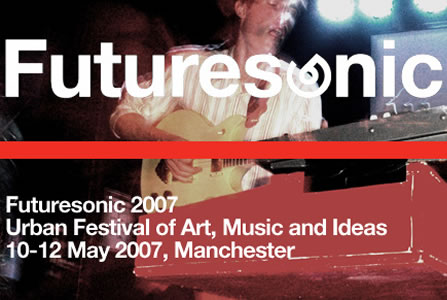 Futuresonic 2007, Futuresonic 2007, the urban festival of art, music and ideas takes place on 10-12 May 2007 in Manchester . A sensational line-up of performances, exhibitions and events across Manchester city-centre featuring over 30 major events, and more than 100 acts and artists from around the world, crammed into 3 days of sounds, sights and delights.

MUSIC FOR THE BEEP GENERATION

Futurevisual celebrates the 40th anniversary of seminal multi-media events that took place in the halcyon year of 1967. Futurevisual brings together legendary figures from the 1960s with some of the most cutting-edge AV artists working in the world today.

The famous 1960’s club UFO, the focus of the 60’s London multi-media scene, is reborn is reborn in a Futuresonic exclusive. A presentation by legendary underground activist Barry Miles is followed by a very special screening of iconic films and AV from the last 40 years, drawing a shimmering arc between ’67 and ’07, and highlighting how the creative ferment of the 60s has echoed through the subsequent decades, presented by Michael Connor .

Semiconductor and Telcosystems perform stunning live audio-visual sets. Screenings and installations can be found in the relaxed setting of the Futurevisual Lounge, with a special champagne cocktail bar for the discerning audio-visual voyager.

30 years after Brian Eno ‘s Music For Airports, Futuresonic presents Art For Shopping Centres, exhibition of major, world-premiere artworks, after which you will never look at a shopping centre the same again. Includes MediaShed with Methods of Movement presenting a freerunning (parkour) installation created with the GEARBOX free-media video toolkit, staged overnight the Manchester Arndale shopping centre, filmed using only the in-house CCTV system, and screened in the shopping centre as a part of the exhibition. Plus new commissioned artworks from Katherine Moriwaki and Graham Harwood .

Art For Shopping Centres is the centrepiece of Urban Play, continuing Futuresonic’s focus since 2004 on taking artworks out of the galleries and into urban space. A part of a UK-wide event series by Futuresonic presented in partnership with MediaShed, Enter, Lovebytes and Access Space.

The ‘ideas strand’ of the Futuresonic festival, the Social Technologies Summit, brings together leading figures to explore “a whole new way of doing things in the air”.

There is today a grass roots open source movement that is sweeping across Brazil like wild fire and captivating the world’s imagination. Claudio Prado is the leading figure in the Brazilian movement. A friend of Gilberto Gil and one of the original organisers of the first Glastonbury Festival in 1970, Claudio now works in a very new frontier in digital and open source culture. He is joined by Cristiano Scabello, a walking collision of Brazilian dub sound system and open source activist, plus James Wallbank from Access Space and Rob van Kranenberg from Bricolabs.

Followed by a Manchester Free Studio workshop, focusing on the initiation of a local Estudio Livre (Free Studio) in Manchester , based on the Brazilian model.

A man falls in slow motion from a high building. Upon impact the concrete paving gives way and ripples in concentric waves as it absorbs the energy of his fall. There is an idea out there that the world is not solid any more. Now that everyone can speak to anyone while on the move or open a web page from anywhere, the ground beneath our feet is no longer hard, but ‘soft’, as in ‘software’.

We live in an age when the future of the next few hundred years is being written. Just as the printing press and the steam engine changed history, so the decisions made now about the design of the technologies we use will shape our lives tomorrow.

It is not just scientists who are engineering this future, but artists and DIY technologists also. Use Your Imagination is a one day event with the goal of ‘open sourcing’ some of the technologies and concepts that are reshaping our lives today.

Environment 2.0 is a new international initiative seeking to explore the sustainability of future arts and technologies. It is a part of a 3 year project by Futuresonic seeking to minimise the environmental impact of the Futuresonic festival and also to explore broader issues connecting Futuresonic’s interest in mobile and social technologies with the new urgency surrounding climate change.

In Environment 2.0 two worlds collide. When the environment is mapped, tagged and digitised it becomes navigable, computable and manipulable. How can this approach to environment, one which is iconic for our times, be reconciled with the need to address climate change? Environment 2.0 will also explore Open Source Energy, looking at low cost and free ways that people can generate energy locally. The Social Technologies Summit at Futuresonic 2007 will include a series of talks on culture and climate change, followed by a network meeting for Environment 2.0.

EVNTS is a strand of the Futuresonic festival which showcases the best new and ground breaking events from around the world. The EVNTS Competition winners in 2007 are Sex With Robots, Licktronica, Monatronic and Rare As A Green Dog.

EVNTS was launched in 2005, with more than thirty events over one weekend, with acts from as far afield as New York , Moscow , Berlin and Dallas . It has since grown into a community of people who each year return to give the festival an extra edge. The EVNTS community is hosting a public meeting the ECAS European music festivals network, with Directors of 15 new music festivals attending on the first day of the Futuresonic 2007 festival.

Futuresonic has been commissioned by Manchester International Festival to present Manchester : Peripheral by Alastair Dant , Tom Davis & David Gunn (The Folk Songs Project). An interactive SoundMap enables audience members to be an ‘urban sound jockey’, remixing and replaying the sounds of Manchester . An online version of the project was launched during Futuresonic 2006 and can be found at www.manchesterperipheral.com . The full large-scale installation will be debuted at the inaugural Manchester International Festival in summer 2007.

Futuresonic is presenting a series of events and gatherings across the UK , in association with MediaShed, Enter, Lovebytes and Access Space.

The launch of MediaShed’s GEARBOX free-media video toolkit, artist talks, and a national network meeting for people working in free-media.

A workshop with Access Space introducing free-media and “video sniffing”, where signals are intercepted from wireless CCTV cameras in the city centre.