From Sparks To Pixel 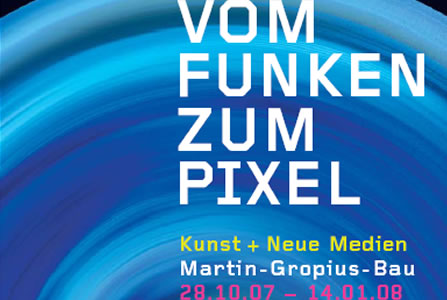 The From Spark to Pixel exhibition in the atrium and on the first floor of the Martin-Gropius-Bau presents international positions in contemporary art which involve the use of digital and interactive electronic media in a large-scale context. The curator, Richard Castelli from Paris, has devised a concept based on people’s attitude to energy, which takes four immaterial conditions – fire, electricity, light and pixel – as its thematic starting point. The pixel, the smallest unit in an electronic image, highlights a form of energy, which no longer has any fossil properties and is, moreover, an information carrier.

The sequence of exhibits is not bound to any strict chronology and holds a wide range of fascinating discoveries in store. The installations and projections selected for the exhibition bring together very varied artistic influences. They incorporate modes of expression that have an affinity with the dramatic arts, such as theatre, performance, choreography and cinematography. In addition, early optical techniques such as the long-forgotten zoetrope are refined and re-interpreted. The artistic prologue is provided by Candle TV, an object produced in 1976 by media art pioneer Nam June Paik. From Spark to Pixel then goes on to present works by Jeffrey Shaw and Sarah Kenderdine (Australia), Dumb Type, Shiro Takatani and Saburo Teshigawara (Japan), Gregory Barsamian (USA), Marie Maquaire, Thomas McIntosh(Canada), Romy Achituv (Israel), Jean Michel Bruye`re, Du Zhenjun, Pierrick Sorin (France), Christian Partos (Sweden), David Moises, Erwin Redl (Austria) and Ulf Langheinrich, KAI, Brad Hwang, Joachim Sauter and Bernd Lüsebrink, Art + Com, (Germany).

These striking installations, most of them on display for the first time in Germany, combine experiences in the perception of time and space with a reinterpretation of the role and participatory potential of the observer. In Jean Michel Bruyere’s legendary cinematographic work Si Poteris Narrare, Licet for Jeffrey Shaw’s EVE Interactive Cinema, for instance, visitors to an interactive 360° projection booth can decide what image sequences they wish to see and from which perspective. In Voyages, a walk-around media installation by Dumb Type, a group of artists and performers from Japan, they can use the palms of their hands to become image carriers themselves.

Light and movement are the determining elements in the works of Christian Partos and in two of the major works by Gregory Barsamian, Scream and No Never Alone, which revives the zoetrope, an early precursor of the cinema. Since 1995, Sauter / Lüsebrink, Art + Com have used their concept of the Invisible Shapes of Things Past to model digital architectural sculptures; the Martin-Gropius-Bau is among the virtual objects generated.

On display alongside Bruyere’s work in the atrium of the Martin-Gropius- Bau are exhibits by Erwin Redl and Ulf Langheinrich, which transform this impressive interior space and dematerialise it, so to speak. In FLOW Berlin Redl shows a hovering blue LED wave that provides the atrium with a virtual ceiling, while Langheinrich’s Hemisphere enables visitors to immerse themselves in an environment which, irrespective of the intriguing apparatus, comes close to the notion of a charged void. Thomas McIntosh’s installation Ondulation offers a different kind of borderline experience. It handles the simultaneity of sound and light waves in a way that makes you think you can see sounds and hear images.

Technical developments in this field are advancing at breathtaking speed. The need for highly sophisticated media technology has fostered international cooperation. A total of 25 works will be on display, 20 of them for the first time in Germany. Erwin Redl’s Flow Berlin 2007, Brad Hwang’s Time May Change Me, I Can’t Change Time and Jean Michel Bruyere’s CaMg(CO3)2 will have their world premiere in the Martin-Gropius-Bau. Nicolai-Verlag (Berlin) will be publishing a richly illustrated exhibition catalogue with in-depth articles on the artists and works.