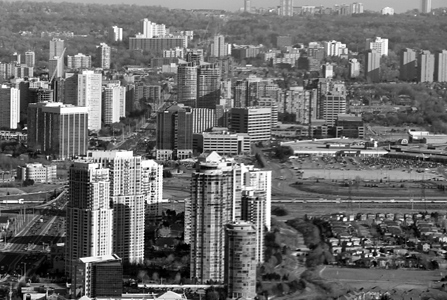 From July 9 to September 23, 2008, the Design Exchange (DX) presents Fringe Benefits: Cosmopolitan Dynamics of a Multicultural City, an exhibition focusing on the rapidly changing nature of Toronto’s suburban landscape. The suburbs of today are more ethnically diverse, globally connected and culturally aware than at any other time in history. The influences of these factors on the built environment are unprecedented in the evolution of the North American city. For many years, the car-dominant strip-mall landscape of the suburb was derided by architects and urban designers as devoid of culture and full of uninspired buildings. Hardly an environment for innovative urban design, until now.

Curated by Ian Chodikoff, urban designer, architect and editor of Canadian Architect magazine, the exhibition features photography, video, maps and art to reveal how racial and ethnic diversity is playing a key role in transforming our suburbs into environments defined by thoughtful and unconventional urban design. 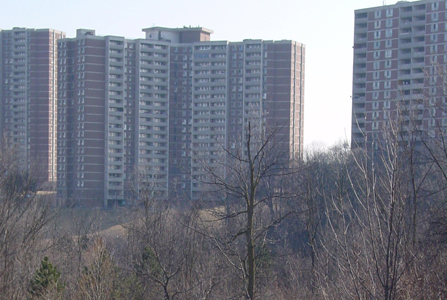 Most immigrants arriving in the GTA will settle directly in the suburbs, bypassing the more expensive downtown neighbourhoods of Toronto. According to 2006 census data, Toronto’s population has increased by a mere 0.9 percent since 2001, while neighbouring cities such as Brampton and Vaughan have grown by 33.3 percent and 31.2 percent respectively. No longer the banal retreat of the white middle class popularized in television sitcoms of the ‘70s and ‘80s, the suburbs are often more ethnically and culturally diverse than the traditional city centre.

Immigrants who bring new skills, innovation and creativity with them are building public markets, specialized housing developments and unconventional retail complexes that are redefining our cities. They are also influencing the development of new schools, religious buildings, community centres and sports facilities being designed to adapt to the needs of their diverse communities while remaining inclusive to all Canadians.

The exhibition highlights both celebrated design by some of Toronto’s leading architects along with a variety of surprising buildings, whether they be adaptively reused or newly constructed, culturally specific forms. Together, these examples demonstrate how diverse multiculturalism is challenging our perceptions of how a cosmopolitan city can function in a globally connected world.

ABOUT THE DESIGN EXCHANGE:
The Design Exchange (DX) is Canada’s design museum, with a mission to engage and educate Canadians about the value of design. It recognizes Canadian design and innovation as key elements in the cultural and economic fabric of our lives. It achieves its mandate through delivering design programs that include exhibitions, competitions, lectures and publications. The DX acknowledges the generous support of the City of Brampton, the City of Markham, and the Canada Council for the Arts.