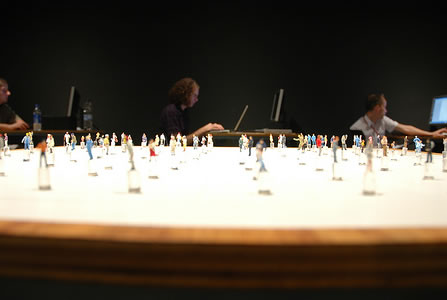 TRAMPOLINE, the platform for new media art opens First Play Berlin and brings together 30 artists to explore the theme of mixed reality from different perspectives. Fusing video, installation and live performance, Trampoline offers a packed evening of media art entertainment to celebrate the launch of the First Play Berlin artworks. The finale will be a live concert by Heidi Mortenson.

First Play Berlin presents an international programme of live media art  the fusion of performance and mobile technology. Expanding the frontiers of interaction and participation, the viewer is invited to navigate virtual data space through simultaneous journeys in the real, physical world.

Giving media art a human interface, the festivalexplores audience interaction beyond a mouse-click with performers who use new technology for their art. With often game-like structures, these works make the viewer into a player and offer a perspective onto our everyday world outside of the mundane. Leaving the stage back at the theatre, they make use of locative media such as mobile phones, PDAs and location aware devices which enable them to get out onto the streets, embedding the work into the real, physical urban environment while simultaneously connecting to remote places and virtual spaces via the networks our cities are pervaded by.

Three commissions from Radiator Festival 2005 in Nottingham will be showcased; Active Ingredient’s ‘Ere be Dragons – a game of discovery governed by the human heartbeat; Dan Belasco Rogers traces his childhood home onto the venue in Our House; Tree by Simon Heijdens sees a virtual tree respond to changes in the weather and the sound of traffic. Another Radiator 2005 artist, Michelle Teran, revisits Life: A User’s Manual  a subversive study of the city’s CCTV landscape.