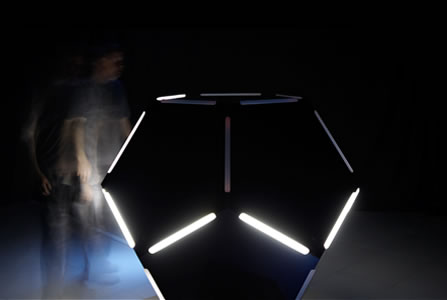 
Chapter I – The Discovery by Félix Luque invites us to to discover an unidentified artificial entity emitting a code of light and sound. Its shape is a pure platonic solid, a dodecahedron, a geometry often associated with philosophical theories, esoterism and sci-fi culture.

After visioning a series of videos staging the discovery of this alien object in several places, we end up in an encounter with a physical interactive object which co-opts information flows, sound and light transmission. The dodecahedron seems to respond to our presence. Is this artificial entity trying to initiate a dialog with us? What does mean the code of light and sound it generates? Is it the discourse of some intelligence coming from elsewhere? How autonomous is it? Is it alive? Does it exist?

The behaviour of this strange object seems to be produced by some kind of artificial intelligence. With the videos series previously viewed, it questions the viewer’s perception about the truthfulness of the representation. The work also addresses feelings like the irrational fear of ‘the other’, of the foreigner or the barbarian, themes that are often relevant in sci-fi literature and cinema.

In Chapter 1 – The discovery, Félix Luque plays with a variety of formal expressive modes, from audiovisual, sculptural, informational to narrative ones. Rather than answering essential philosophical questions – such as, How can technological advances be controlled? On what ethical bases can its purposes be chosen? Who is entitled to decide on the ultimate mission of machines? Can machines destroy us? – the installation, on the contrary, is about reformulating those modern philosophical questions through the use of images associated with the popular culture of science fiction and the techno-utopias and myths around artificial intelligence. 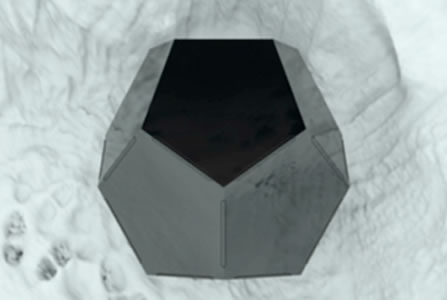 Chapter I: The Discovery has been previously shown at LABoral (Gijon, Spain) and is nominated for the Transmediale 2010 (Berlin).

About Felix Luque
Félix Luque Sánchez (Oviedo 1976) is a digital artist. His works and installations have been presented at various contemporary art institutions in Spain, including Mercat de les Flors, Metrònom, CCCB and MACBA. Félix has received a number of scholarships, including a Phonos grant for audiovisual and musical production for young artists (2002-2004), and the Digital Art scholarship of the Belgian Ministry for Culture for the Francophone community (2008). He has also been nominated at the Transmediale 2010 for his project Chapter I: The Discovery.