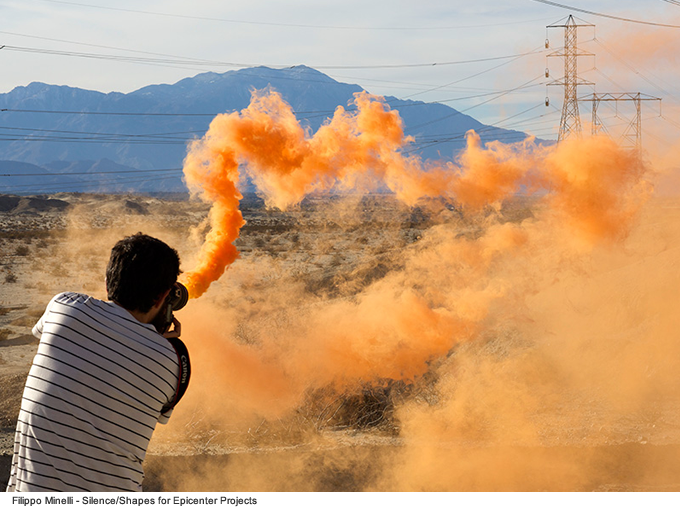 There is a brand new platform, born in 2015 in California which lives a nomadic life: Epicenter Projects. Its core is giving artists both the opportunity to live a residency program in the Californian desert and the chance to create a new time-based and site-specific production alongside the San Andreas Fault Line.

Epicenter Projects is made possible by Cristopher Cichocki, multi-disciplinary artist and Epicenter Projects Chief Curator. The selected artists can live a unique experience, getting in touch with one of the largest fault zones in the world. Land Art is indeed a benchmark, along with the research on key concepts such as space, light and time in nature.

We decided to interview Cristopher to understand how Epicenter Projects is going to further develop. 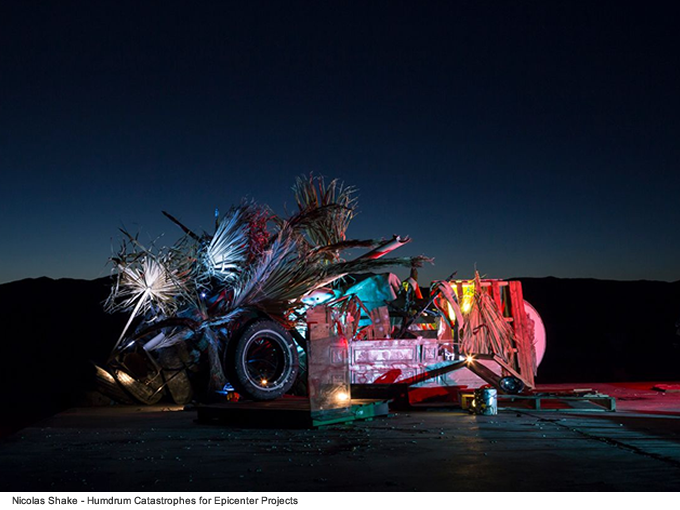 Silvia Scaravaggi: Why did you start the Epicenter Projects? What is your goal?

Cristopher Cichocki: I grew up in the desert of Southern California’s Coachella Valley. As a multi-disciplinary artist the desert has provided me a lot of freedom to experiment and develop my practice within a site-specific framework. The desert region has been a vital extension of my studio, allowing elements of painting, photography, sculpture, video and installation to organically emerge in collaboration with the landscape. I started the Epicenter Projects early this year, willing to invite other artists into the desert to create site-specific works along the San Andreas Fault, one of the world’s most powerful fault lines that spans throughout the region.

I see Epicenter Projects as an extension of Land Art and Light & Space works, yet in this digital era of the internet. The project is created alongside the vast and secluded desert landscape, but the final results of the project are shown into globally connected online exhibitions via epicenterprojects.com. In a certain sense the internet provides the ideal platform to view and appreciate these site-specific works, given their ephemeral nature.

Silvia Scaravaggi: Why did you choose San Andreas Fault Line as a benchmark? Which kind of relationship do you strike up with the environment and its time and space, as an artist?

Cristopher Cichocki: As I consider the fault line as an open studio, it brings me to question the notions of temporality and permanence. The artists I’ve invited for residencies demonstrate a diversity of time-based, interventionist, or site-specific sensibilities. The San Andreas is a contextual backdrop that provides an existential framework for each artist to explore and respond to. 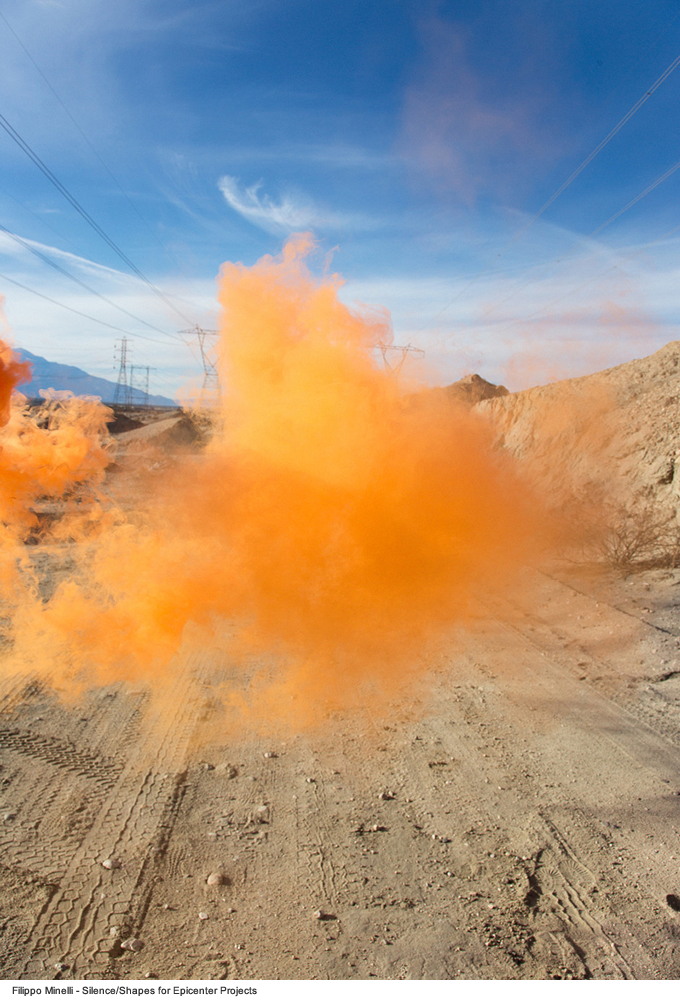 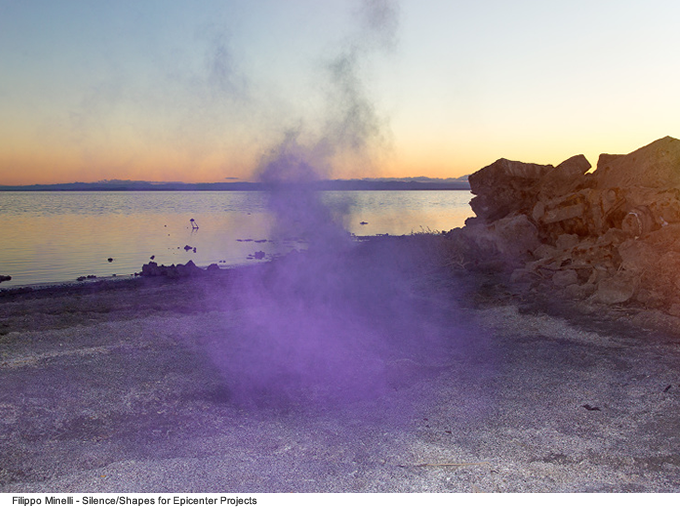 Silvia Scaravaggi: The Italian artist Filippo Minelli developed the first project for Epicenter in the form of his research Silence/Shapes, which we can see on Vimeo platform https://vimeo.com/115846504. We know Filippo from our past interview http://www.digicult.it/digimag/issue-070/no-puns-intended-a-conversation-with-filippo-minelli. How did you work together? Which kind of media have you chosen for your project?

Cristopher Cichocki: I went with Filippo around various sites along the San Andreas, where he could access freely with his smoke clouds. He gravitated to produce his work a variety of areas I’d introduce him to. At some point the wind was a major factor in the production, given the drifting sensitivity of the smoke formations. Overall, it was a very fluid process that allowed Filippo to make a substantial series of his Silence / Shapes works in an efficient amount of time.

Silvia Scaravaggi: How do you work with residency and curatorship? Which is your idea of “being a curator”?

Cristopher Cichocki: My role as a curator is different for each project. In relationship to Epicenter Projects I see a symbiotic relationship as curator and collaborator. I document each project each project while also providing the catalyst for each project to emerge within the sites I introduce to the artists. I’ve endlessly explored my surrounding region discovering many sites off the beaten path, seemingly in the middle of nowhere. I take each artist’s work into deep consideration, mapping out locations along the San Andreas that I feel would activate a significant level of synergy and contextual relevance. I travel to the site with each artist and begin to document their process through photo stills and video. This documentation formulates the material for an introduction with a short documentary produced about each artist as part of his online exhibition via epicenterprojects.com. 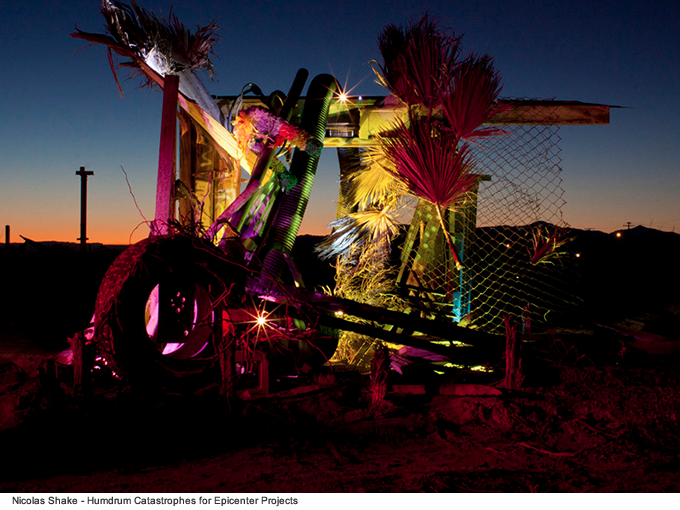 Silvia Scaravaggi: Your idea of hybrid archive is very interesting and stimulating. Can you give me some hints? Which platforms and media are you going to use?

Cristopher Cichocki: Aside from the online exhibitions for each artist, the future of Epicenter Projects will involve a series of exhibitions with video, photography, sculptures, sculptural relics, posters, audio recordings and interactive online elements. After the initial line-up of projects have been completed, I will develop this material into traveling exhibitions showcasing the program as a hybrid entity.

Silvia Scaravaggi: Tell me something about the new residency with Nicolas Shake.

Cristopher Cichocki: Nicolas Shake came down for his residency a few weeks ago and created some amazing new works. His online exhibition Humdrum Catastrophes showcases the works he created during his residency and is now available for viewing via epicenterprojects.com

Silvia Scaravaggi: How did Nicolas work on the project?

Cristopher Cichocki: Over the past few years Nicolas has been working on a photographic series, for whom he has arranged different materials, found in situation of abandonment and decay. His approach for these sculptural arrangements is similar to his way of painting, because he uses a variety of lights to “paint” these arrangements, then he takes photographs of the end result at night. There’s a striking visual contrast with these illuminated works out in the open desert. The works are truly transformative site interventions.

Silvia Scaravaggi: The inaugural 2015 line-up of Epicenter Projects includes many artists. How do you choose them for the residency?

Cristopher Cichocki: All the artists I’ve selected have a strong site-specific sensibility or work in time-based modes of production. I’ve known some of them previously, while others have been invited as a result of my research. The inaugural line-up of Epicenter Projects will include artists: Olga Koumoundouros, Luis G. Hernandez, John Knuth, Robert Seidel and Melissa Thorne.