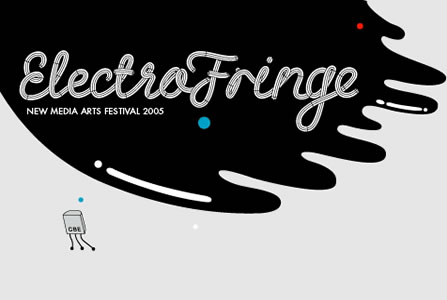 Electrofringe will take place in Newcastle as part of the This Is Not Art Festival from 29 September – 3 October 2005. The directors for 2005 are Wade Marynowsky and Sumugan Sivanesan. Emma Stewart is the program co-ordinator for an exciting new additional program titled Australia…Where?

As we near the end of 2005 it’s time to take stock of what’s going on. Recent developments in arts, politics and technology challenge us to re-evaluate the culture we are part of.

This year Electrofringe invites you to Engage, Exchange and Evolve

ENGAGE – This year we will present well over 80 artists, technologists, and commentators from a broad spectrum of practices encompassing screen, sound, social networking, interactive media, performance, sculpture and installation. We provide a forum where you can talk, make, break and play.

EXCHANGE – The exchange of ideas and skills is what Electrofringe is all about. The informal panels, workshops, masterclasses and presentations encourage lively discussions to broaden horizons. We have devised a program to showcase work and talk about intriguing concepts, techniques and practices that explore the future of new media arts.

EVOLVE – So .what next? Now in its eighth year Electrofringe is a key forum to facilitate this discussion.

You can find the complete program of the festival on the web site. But, what’s going on?

ProcessSpace, formerly Patch Lab is once more presented in conjunction with The University of Western Sydney and the Dysfunctional Feed Collective. Not only patching, but marking, cutting and scratching.

ProjectSpace is an open workshop where artists and collectives can work in residence over the duration of the festival. We expect spontaneous media events, mongrel monster machines, and extreme toy sports to emerge from this space.

ElectroProjections presents three nights of innovate screen works from around Australia and across the world. Expect remixed media mayhem, stellar spectacles of sound and vision and short works for short attention spans.

An exciting development this year is Australia…Where? – showcasing work from indigenous and regional Australia, as well cross cultural exchanges between Australian and Asian artists. Key highlights are the Otakulture exhibition at Newcastle’s Rocketart Gallery.

A night of Liquid Space presenting the best and weirdest new media from Darwin’s 24hrArt ; an online exhibition of indigenous art; a special screening of the controversial First Fleet Back, starring Uncle Kevin Buzzacott  Minister for Invasion; and screening programs direct from the OK Video Festival in Jakarta, Indonesia and from the Thailand Media Arts Festival .

Exhibition wise, Zehra Ahmed’s Permission to Narrate will be installed at Newcastle Region Art Gallery from August 19  September 24, as a festival teaser. At least, an exhibition at Field Contemporary Artspace in conjunction with Hunter TAFE  as well as our online gallery of net based art.