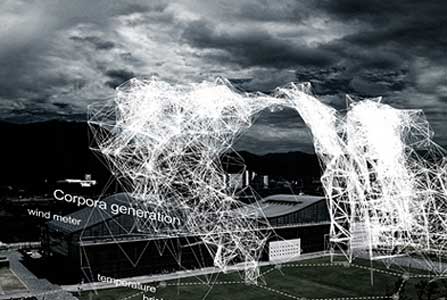 An attempt to extract autonomous architecture responding to the environment through information network Yamaguchi Center for Arts and Media (YCAM) holds a new installation Corpora in Si(gh)te (commissioned by YCAM) by doubleNegatives Architecture.

doubleNegatives Architecture is an architectural group who is engaged in crossover activities in a new area of architecture, making good use of various media and information technologies. In Corpora in Si(gh)te, a number of sensors are set up in the whole area around YCAM (building and central park) to form a meshed network, so that real-time environmental information (temperature, brightness, wind direction, sound, etc.) is collected and networked. A cellular, distributed network of nodes react through realtime processing to the environmental conditions, growing and subsiding like an organism.

Despite each node making local decisions and not having a central architect, the nodes inadvertently give rise to an architectural structure, both indoors in the YCAM building and outdoors in the park. This “information architecture” has its own spatial perception to make itself transform into various forms by providing each part of architecture with Super-Eye perceptive points with the environment, such as voluntary notation from each node of Corpora.

Changes in the architecture that looks as if living in the environment are visualized for visitors, as images overlapping real scenes through the AR (augmented reality) technology at several points around YCAM building.