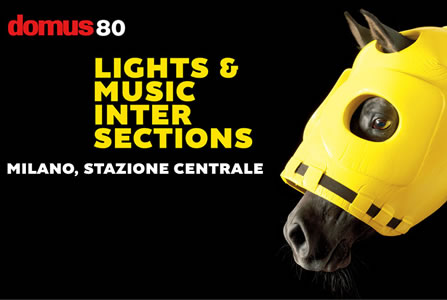 In conjunction with the Furniture Fair, Domus continues the celebrations planned for its 80th year and pursues its dialogue with Milan by presenting “Domus 80 – Lights & Music Intersections ” in piazza Duca d’Aosta and in the Galleria delle Carrozze of the Stazione Centrale.

Between 16 – 20 April 2008 in piazza Duca d’Aosta – the event will feature the Pleinmuseum , a remarkable installation that opens and lights up at night like a rare flower. It will offer a continuum of graphic and artistic performances made of images and films shown on 8 large screen / panels. The new graphic design launched by Domus in the April issue currently in the newsstands will also be illustrated in sample pages and treatments. Milanese artists are invited to bring their works to the Pleinmuseum. In this way, Domus is helping increase the art on offer in the city by involving its own artists and improving the people’s enjoyment of a square criticised or perceived only as a place of transit.

And Stazione Centrale in Milan – where the Gruppo Ferrovie dello Stato is carrying out restoration and building work that will be presented by the heads of the FS to the city authorities and the press at 15:30 with visit to the building site- will provide the atmospheric stage on 18 April from 20:00 to midnight, in the Galleria delle Carrozze will host an unusual public and free concert in which young people and fine Italian artists will mix the musical languages and traditions of the best world music, plus analogue and digital music, easy listening, all the 1960’s – 80’s experimentation, violin, piano, sophisticated DJ mixes, kettle and wind instruments. A highly enjoyable musical selection for the general public, albeit an alternative to the big international names and unusual in its sounds.