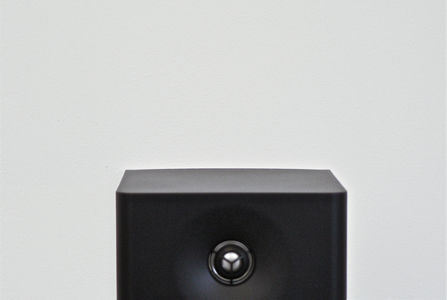 On Friday 26th May 2010, starting at 6.30 pm, the opening to “Legami invisibili (Invisible bonds)”, Dominique Petitgand’s second solo exhibition for e/static – after the one in 2006 – will be held at blank in via Reggio 27 in Turin.

In the last couple of years, the work of this French artist, active at the beginning of the ’90s, was met with growing interest by the contemporary international scene, as proven by important solo and group exhibitions, at Art Basel in 2008, at Tate Modern in 2009, at Mudam Luxembourg in the same year – to name a few – which definitively attested the acknowledgement of the high quality of his very personal work, objectively unique on the current scene, unlike anyone else’s.

Petitgand records the voices of his relatives, or of other people he meets; after some time has passed by, even many years, when these voices have ‘settled’, and a certain distance has come between them and himself, he works on the recordings breaking the unity of the conversation, taking out some words, creating pauses, interspersing talk with brief sighs, or with sounds or noises coming from other recordings.

Thus, a new sense emerges from the conversation, a substratum with a strong emotional significance, which was hard to detect before, is now highlighted, accentuated, or revealed. 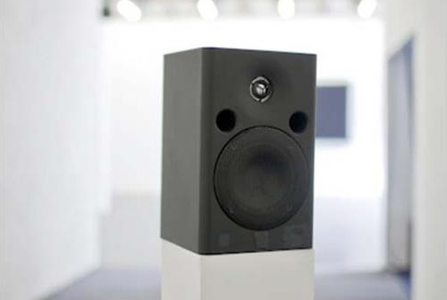 The installation presented at blank by Dominique Petitgand, as usual with his works, especially in the last couple of years, intervenes on space so as to include it, instrumentally, in the development of the action of sound. The action takes place in three different areas – also in a temporal sense – with the expert use of silent pauses to counterpoint the vocal parts and the parts consisting of sound or noise.

Two works will be showcased in the exhibition, La main coupèe (The severed hand) and Aloof. The first one is a new composition, and includes a female voice already used in other compositions, though this time it is connected to a different repertoire of sounds and voices or other audio elements coming from his own personal library.

The use of this part in different contexts makes the voice sound different to us each time, and the same thing happens, in an even more prominent way, to what it says, though it is said with the same words. The second composi tion, created in 2005/2006, appears renewed, as it establishes a connection with the first one in this particular spatial context, a subtle relationship, hardly discernible as one listens to it at first, and which the artist leaves up to the interested listener to discover.

Likewise, the various relationships between the compositions and the space that holds them, implicit in the arrangement of the exhibition, are not overtly declared by the artist, and it is again up to the spectator to discover and experience them, making them thus an essential part of the work. 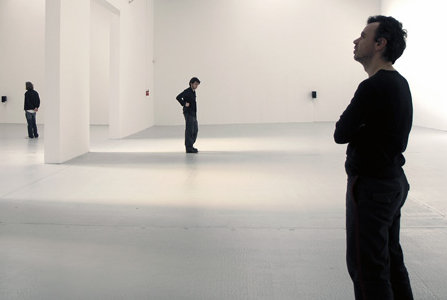 Born in Laxou in 1965 and currently living in Paris, Dominique Petitgand exhibited in public and private spaces in Europe and North America, amongst which, besides the ones previously mentioned: gb agency in Paris, ISCP in New York, Musée National des Beaux-Arts de Québec, Le Plateau in Paris, FRAC Haute-Normandie, ARC (Musée d’Art Moderne de la Ville de Paris) in Paris, ar/ge Kunst Galerie Museum in Bolzano, and, last in chronological order, the Motive Gallery in Amsterdam, with the opening of his solo exhibition this year, on 11th March. He also recorded many CDs, amongst which, Le bout de la langue (The tip of the tongue), Les sens de la mesure (The sense of limit), Etat liquide (Liquid State), Fatigue (Fatigue).

The artist started his collaboration with e/static in 2004, participating in that years’ edition of visionair, after which he held the solo exhibition Con voci e senza (With and without voices)  in 2006, and then he participated in the group exhibitions “Découpage (f l)” in 2006 and This is the time (and this is the recording of the time) in 2007. Last 29th October Dominique Petitgand premiered at blank his retrospective catalogue “Installations / documents”.