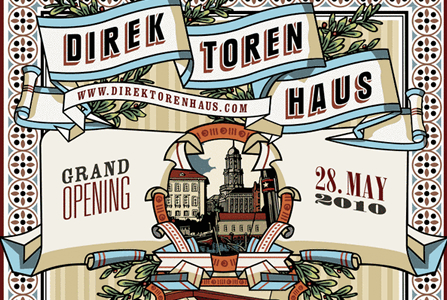 Last May 28th, 2010 the Direktorenhaus opened a new art space in Berlin, an experimental laboratory for Gesamtkunstwerk, the synthesis of the arts. Traditional crafts will be combined with analogue techniques and digital media, and will not be limited to their own aesthetics but also seen as experimental formations with both social and asocial connotations.

The exhibitions in the Direktorenhaus play cat and mouse preconceptions; they mark the opening of a space in Berlin, where art, craft, design, music and life come together.
Initiated by the founders of Illustrative, Pascal Johanssen and Katja Kleiss, the house displays unique works, prototypes and limited editions of many artistic disciplines. International design concepts are now present, right in the heart of Berlin.

The first of four theme oriented exhibitions is devoted to Berlin illustrator Olaf Hajek, supplemented by installations and objects by other artists and designers that spread throughout the building like a mosaic.
With the exhibition “Flowerhead” Hajek presents his new versions of natureman, flowerhead and forest themes in which the artist’s use of mezzotint technique are combined with references to South American folk culture, mythology, religion, history and geography.

The exhibition seasons of the Direktorenhaus are linked to the 2010 calendar year. The four topics “Magic Realism” (early summer), “Montibello” (summer), “Corncraft“ (autumn) and “Opium den” (winter) form the seasonal framework of the exhibitions of art, craft, design and performance. 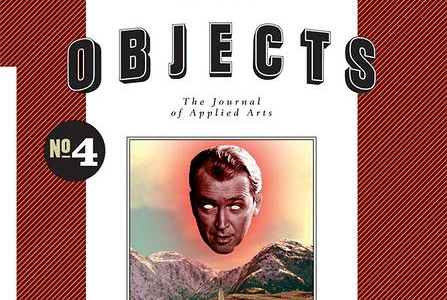 The name Direktorenhaus refers back to a complex of buildings of the Staatliche Münze, the former state mint in Berlin-Mitte, which had been abandoned for years. Built in 1935 the well secured vaults of the wing were used not just as storage for coins during the Second World War but also to protect the artworks of Berlin State Museums from bombings. Today the Direktorenhaus, situated at “Am Krögel 2” is right in the centre of town, between Alexanderplatz and the Nikolai Virtel district, directly on the banks of the River Spree, overlooking the old harbour.

The Direktorenhaus is the latest project from gallery owners and Illustrative founders Pascal Johanssen and Katja Kleiss. The house is managed by Illustrative e.V., a non-profit organisation based in Berlin. The Illustrative festival was started in 2006 and is considered to be the most important forum for contemporary illustration and graphic art in the world. Attracting some 30 000 visitors annually, the festival has taken place in Berlin as well as in Zurich and Paris. Since 2009 Illustrative has published the art journal “Objects: Journal for Applied Arts” where, through articles and photographs, innovation in the applied arts is investigated. The Direktorenhaus is a coherent continuation of these projects that functions as a permanent exhibition space for the whole neocraft art versus design debate.