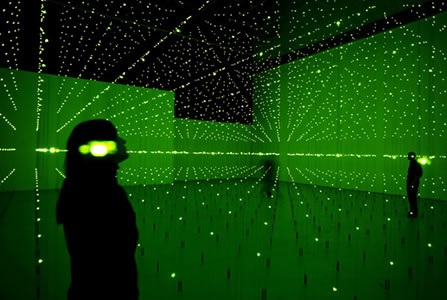 DIGITAL LIFE, is a project dedicated to the digital future and to the cross-fertilization between technology, new media and contemporary artistic expressions. On the 3 March 2010, this project inaugurates La Pelanda, a new location in the newly refurbished ex-abattoirs in Testaccio for contemporary artistic and cultural productions. These premises have been renovated for the city by the Rome Municipality as part of the Zone attive Project.

DIGITAL LIFE stems from an initiative of the Rome Chamber of Commerce and is part of a more articulated project focused on technological innovation as a crucial factor in economic development promoted by the Inspectorate for Cultural Policy and Communication  City of Rome Directorate for Cultural Heritage and MACRO. Fondazione Romaeuropa has been prime-mover in the ideation and organisation of the DIGITAL LIFE project as part of its mission as an institution of international stature projected towards constant research and monitoring diverse creative approaches and new horizons in digital innovation in Italy and abroad. This fruitful union between art and technology has also been possible through close collaboration with the Romaeuropa Webfactory and the Capitale Digitale Projects.

The artistic direction of DIGITAL LIFE is entrusted to Richard Castelli who has selected for the exhibition a series of the most innovative artists operative in the international contemporary scene: Ryuichi Sakamoto, Shiro Takatani, Jeffrey Shaw, Ulf Langheinrich, Jean Michel Bruyère, Erwin Redl, Thomas McIntosh, Emmanuel Madan, Martux-m, Mikko Hynninen, Julien Maire, Christian Partos. Through their works, these artists give life to an unedited and singular experience; a voyage through a series of installations and video projections created using technological instruments of the latest generation. The works evoke a multisensory and futuristic conception of art, proposing new and innovative means to draw the audience into the project.

All of the works exhibited have never been presented in Italy and for some, DIGITAL LIFE represents the European or even World Première with some of the works having been conceived specifically for La Pelanda. Objective of the Exhibition: to bring to the forefront the new contemporary frontiers where technology, interdisciplinary and multisensory ambiences meet and give birth to a new form of experiencing art. In our “real-time” era constructed from immediateness and directness, the future of art is indissoluble from technology, the last inventions and new formats which are destined to radically modify our relations with the creative work and will undoubtedly give rise to new participative and sensory experiences. 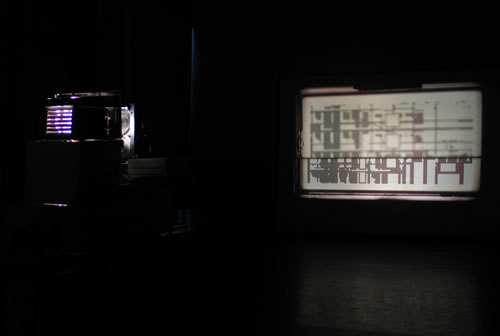 The use of the Web, new 3D audiovisual systems and the latest developments in cinematography favour innovation in the artistic creative processes and a more immersive and holistic experience for the visitor by involving all of the senses. Scientific and technological research constitute tomorrow’s creative base and form a wider platform for the corporate sector, research centres, universities and artists to work together. The characteristic of tomorrow’s art will be the capacity to produce a whirlpool out of today’s references or a shift in both our position in the world and of our view of what surrounds us.

Some of the works exhibited employ the innovative projection and sound system AVIE: an immersive, interactive 360° visualisation environment specifically developed by the artist Jeffrey Shaw for the University of South Wales (Australia), and currently in use in the cinema of the same faculty and in the ZKM  Zentrum für Kunst und Medientechnologie in Karlsruhe and in 2010, to be installed at the University of Hong Kong. AVIE allows the application of the latest technology to the creative process and consents not only an interactive exploration of the work but also permits the audience to participate in an immersive artistic experience. Through the AVIE system, 3D audiovisual experiences are generated combining multiple video and sound projections from different sources. Furthermore, through a real-time infrared tracking system, software generated models are created from the movement and gestures of the visitors, so further contributing to create a truly interactive experience.

With his work La Dispersion du Fils, to be presented in World Première in Rome in its definitive version, Jean Michel Bruyère explores the entire potential of the AVIE system by projecting on a 3D structure images from over 500 films, for the greater part unseen. This cinematographic archive has been rendered available by La Fabriks, international pioneers in multimedia technology and founded by the same Bruyère. La Dispersion du Fils uses and transforms almost all the video material produced by the Theatre Performance troupe LFKs over the past ten years. The audience can witness two different sides of the work; a inclusive overall perception of the work or can home in on a decomposed view of the projected virtual space.

The installation by the Japanese musician and composer Ryuichi Sakamoto and video artist Shiro Takatani, leader of the artistic group Dumb Type, places the viewer in a completely darkened space where nine glass tanks containing water and artificial mist are suspended in mid air, above his head. Excerpts from film archive, short clips, light effects, sound and the spoken word move inside each tank and pervade the surroundings. Sakamoto’s nine stereophonic compositions-one for each tank, are woven together with Takatani’s artistic video-works, while an advanced sound synchronisation system is programmed to prevent repetition of the same sequence of sound and image. 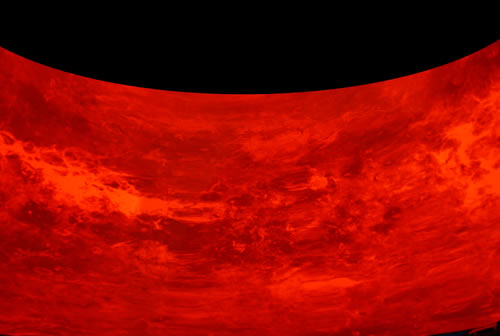 Always employing the AVIE technology, Ulf Langheinrich’s world première in Rome of his work Alluvium immerses the visitor in a multisensory aquatic world which uses both visual and audio contamination as its creative feature. Erwin Redl involves the spectator in one of his architectural installations made of light and luminous Matrix series mountings.

Redl’s work creates a sort of second skin for the spectator; a type of “social correspondence of the outer layer of our body”. Thomas McIntosh, Emmanuel Madan, Mikko Hynninen collaborate in the realisation of a sculptural installation, Ondulation which uses sound to produce images through water and light; a rectangular monolithic body of water, first immobile which then starts to move slowly by the refraction of sound waves from a musical score emitted from powerful loudspeakers placed directly above the surface of the liquid.

The effect is a continuously changing dream-like sculpture made of water, sound and reflected images. Julien Maire, by using an experimental system of low resolution video projection, presents three installations which hover somewhere between video, photography and machinery as sculpture. Martux_M presents X-Scape 09, an audio-visual modulated project in which electronic music and images are combined to evoke the sensation of a landscape made of sound.

Christian Partos uses five thousand reflecting mirrors suitably illuminated to create his images. M.O.M. is a composition of the face of the artist’s mother projected onto an empty wall and alluding to the technique used (Multi Oriented Mirror), it simultaneously hides and reveals the central soul of the figure depicted.