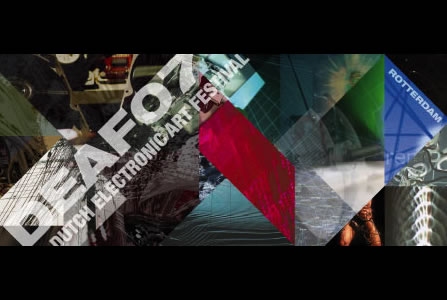 From 10 through 29 April 2007, the eighth Dutch Electronic Art Festival (DEAF) will take place in Rotterdam. This international festival is organized every two years by V2_, Institute for the Unstable Media. It will be the first event to take place in the fully renovated Las Palmas cultural center in Rotterdam ‘s Kop van Zuid area. This year’s theme is Interact or Die! DEAF features an extensive program addressing art, technology, science and society, with a large exhibition of interactive art as a focal point. This year’s festival will devote special attention to China.

The Dutch Electronic Art Festival (DEAF) is an international and interdisciplinary biennial that focuses on art, technology and society. DEAF is one of the most important international festivals focusing on art and media technology, and it can be regarded as a showcase for research for and production of new media art (some specially commissioned).

Visitors will also be able to enjoy concerts, performances, seminars, workshops and a symposium. DEAF07 is the definitive event at which the international ‘creative city’ network comes together.

A large international exhibition shows an intriguing overview of contemporary interactive arts. From cutting edge and experimental technological art to almost classical video art. With works from Europe, the United States , Canada , China and Japan , and also some specially commissioned works. The exhibition opens with a performance of Code31 on the 10th of April and runs on till 29th of April.

The theme of the symposium – and the accompanying publication – is the ways organization and structure come about, and become effective, through interaction within networks. The speakers in the symposium consider this question from artistic, architectonic, social, political, biological and cognitive perspectives.

DETLEF MERTINS is Professor of Architecture and Chair of of the Department of Architecture at Penn University of Pennsylvania. Amongst his numerous publications are The Presence of Mies, and Metropolitan Mutations: The Architecture of Emerging Public Spaces. His research focuses on the history and theory of modernism in architecture, art, philosophy, and urbanism.

LARS SPUYBROEK is Professor and Chair at the Georgia Institute of Technology in Atlanta and the principal of NOX, an art & architecture studio in Rotterdam . Since the early 1990s he has been researching the relationship between art, architecture and computing, not only by building but also by writing, speaking and teaching. In 2004 Thames & Hudson published his 400-page monograph, NOX: Machining Architecture.

HOWARD CAYGILL is Professor of Cultural History at Goldsmiths College in London . His research interests are in the fields of the history of philosophy, aesthetics and cultural history. Currently he is completing a book on the philosophical and medical aspects of the body. He is the author of several books, amongst which Walter Benjamin : The Colour of Experience (1998) and Levinas and the Political (2002).

NOORTJE MARRES works as a Marie Curie Research Fellow at the Sociology Department, Goldsmiths College in London . Her current research focuses on climate change and the role of non-human entities as mediators of civic involvement in this issue. She draws on actor-network theory and American pragmatism to develop an object-oriented perspective on public involvement in politics. Her recent work has been published in Making Things Public (MIT Press, 2005), Reformatting Politics (Routledge, 2006) and Nongovernmental Politics (Zone Books, forthcoming). She is an editor of two Dutch journals, Krisis and De Gids.

JEANNE VAN HEESWIJK is an artist without a studio, who organizes, facilitates, and creates conditions for visual art to come to fruition and engage people. She is one of the leading names in socially oriented art, where her role fluctuates from organizer, host, policy maker, editor to producer or researcher.

Organizer V2_, which has developed DEAF into an important international festival for art and media technology, turns 25 years old this year. One of the DEAF07 theme nights will accordingly be devoted to V2_’s anniversary. A part of the festival program will also focus on the network V2_ has built in China and Asia over the past few years. Young artists and exhibition makers from China , along with several key members of the Chinese art world, will play an active role at DEAF.