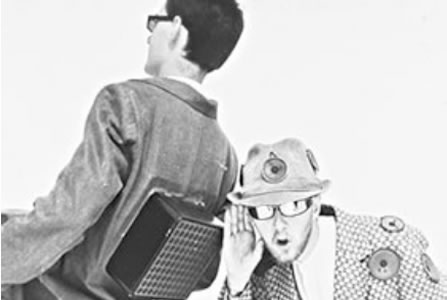 The DIGITAL ART WEEKS program is concerned with the application of digital technology in the arts. Consisting of symposium , workshops and performances , the Digital Art Weeks program offers insight into current research and innovations in art and technology as well as illustrating resulting synergies in a series of performances during the Digital Art Weeks Festival each year, making artists aware of impulses in technology and scientists aware of the possibilities of application of technology in the art.

This year’s special guest is Prof. Dr. Joseph Weizenbaum , author of the influental book “Computer Power and Human Reason – From Judgment to Calculation” (1976). He will open the festivities with a talk directed at both scientists as well as cultural workers. His talk will be followed by two important documentary films on computer science. The first concerns Weizenbaum’s life and work and the second shows how influential computers can be on the arts.

WEDNESDAY, JULY 11: “Space Invaders: Not Arts and Hacktics in a Digital Age”

The import of location in place-based artworks represents a set of relations that become visible as they are affected or reconfigured. The artists in this exhibition explore the potential of public space, geographic territory, architectural location, social relations, online informational media, and virtual 3D worlds to form situational works

In addition to the performances scheduled under the title “Cabled Madness”, the programme have a number of artworks on display. In support of Weizenbaum’s excess and error criticism with its warning against the no-need-to-think condition of the “terror-error”, electronic madness is now being expressed by artists using technologies in a civic manner for the aesthetic enrichment of artist and viewer alike.

All of the two channel works chosen for this year’s SoundScape programme were selected on their ability to ‘evoke’ the presence of things or beings in space to the extent that the each work ‘immerses’ the listener into a real or imaginary sonic environment. All of the works fall into to three distinct categories. The first category Real Worlds can be linked back to sounds known to be us from the real world. These sounds are often extended by including those created by electronic means. The artificially generated sounds blend into to the natural sounds in a variety of unique ways, thus provided the listener with an enhanced variant of the everyday sound world. The second category Virtual Worlds , in contrast to the first, uses only artificially generated sounds in order to create an immersive environment that assumes to evoke a natural one. The third category Mixed Worlds includes mostly those works in which the sonic characteristics of both the first and the second can be heard in juxtaposition

THE DAW FINISSAGE: FROM LOW TO HIGH VOLTAGE