Data Graphics and the Slippery Slope between Art and Design 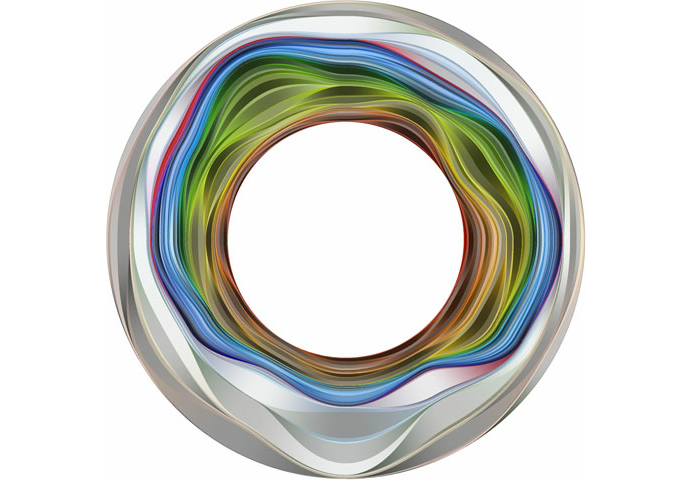 Data graphics are tools. Like any tool, a data graphic enables us to ‘do’ something with as little effort as possible. A screw driver turns a screw and an info graphic enhances our understanding. It reveals a pattern inside the numbers. The function of a data graphic is to communicate this pattern clearly. And yet, not all data graphics aspire to be models of utility.

Like the classic info graphic, Information visualizations and data art also allow us to ‘see’ data, rather than ‘read’ data. The difference between these graphic data types is their relationship to function. This isn’t a semantic distinction. The difference is real even if its often a matter of degree. Info Graphics, Data Visualizations, and Data art are positions on a spectrum, inhabiting a space, between science and art, and between art and design.

On the left end of the spectrum are we find the clearest and technically speaking, the most useful kinds of data graphics: charts, graphs, and diagrams. A well designed info graph transmits its message with the minimal amount of effort and with maximum “stickiness”, as Malcolm Gladwell says. The goal is complete transparency between output and input. Hans Rosling, whose information visualizations of disease and poverty (http://www.gapminder.org/) have mesmerized large audiences at TED Lectures (http://www.ted.com/talks/hans_rosling_at_state.html) famously says: “Let the Data Set change your Mind Set”. 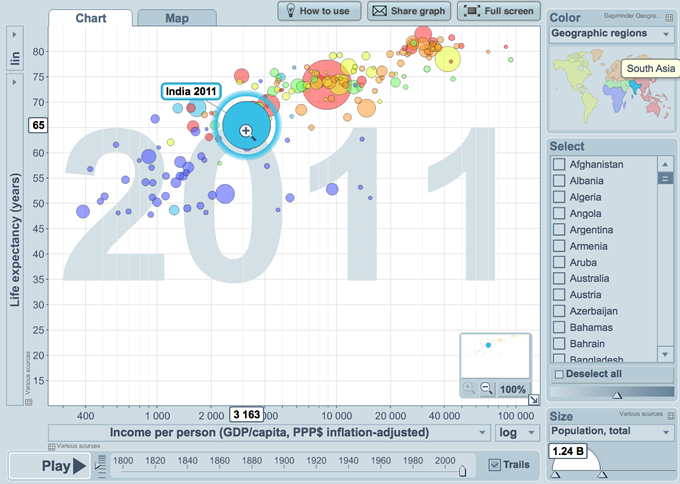 Rosling is a statistician who loves numbers like a an ornithologist loves birds. Rosling uses simple interactive charts to communicate the patterns behind the numbers to raise awareness about the world’s most pressing problems – poverty, hunger, disease – and the most effective solutions. He exemplifies the power of information graphics to move people in a way that facts and figures cannot.

His interactive GapMinder application is easy to use and easy to understand, allowing Rosling to draw clear conclusions. And with that clear understanding comes the opportunity to inspire action. That’s the function of an info graphic, to promote clear understanding and inspire action. That action could be giving more money to a global non-profit or backing up an argument with a friend. The data is organized to be useful.

Nicotine Friends by Column five – http://awesome.good.is/transparency/web/1111/ nicotine/flat.html graphically illustrates the rate of smoking around the world. Abstracted cigarettes of varying filter lengths map the data. The Data is transparent. The conclusions are clear. There is a high fidelity between the data and its graphic expression.

Transparency – Measuring the Senate by CatalogTree – http://awesome.good.is/ transparency/010/trans010thesenate.html adopts the metaphor of the voting ballot, to map the the senators party affiliations, using X and O symbols. The X’s and O’s are grouped together into boxes of the same width. There is no need to count the number of X’s and O’s. The viewer can ‘see’ the difference immediately by focusing on the size of the box. We don’t need to know the numerical value. We can see it. 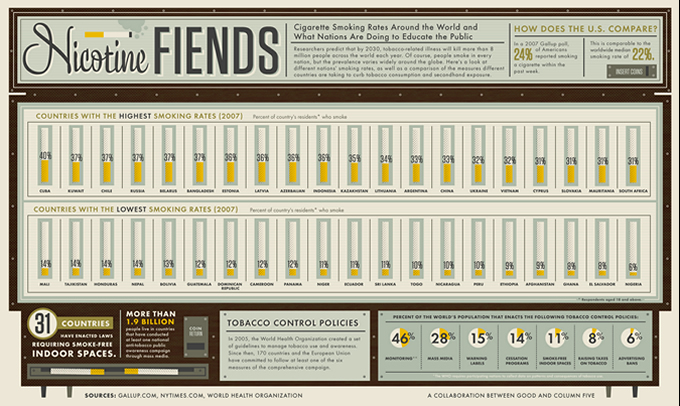 While the classic info-graphic can be consumed in a glance, information visualizations sacrifice some of their transparency for aesthetic reasons. These aesthetic reasons convey a different level of understanding about the data, one that is qualitative rather than quantitative. The conclusions do not ‘pop out’. They must be pulled out. Information visualizations flaunt the complex nature of their data, instead of simplifying it, They revel in the eye candy.

Given the turmoil and hand-wringing over the impending death of printed news, the New York Times has taken a proactive approach to exploring a digital existence. The New York Times R&D (Research and Development) group http://www.nytlabs.com/ consists of designers and programmers exploring interesting ways to present the news in the digital domain.

Their project Cascade http://nytlabs.com/projects/cascade.html uses the metaphor of a solar system to visualize its data set. Cascade “links browsing behavior on a site to sharing activity to construct a detailed picture of how information propagates through the social media space.” http://nytlabs.com/projects/cascade.html. Cascade shows the wave like movement of the data, spreading out from its source like ripples of water from a tossed stone. The viewer has to actively explore the three dimensional graphics to find the hard data. The complexity of the image compromises its clarity, but its aestheticized interactivity makes the content more seductive. 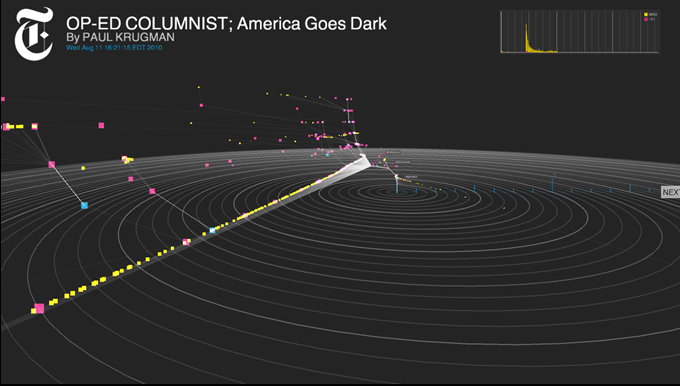 The Cheerio Maps http://content.stamen.com/cheerio_maps by Stamen Design visualizes home values in San Francisco, using colored spots of varying color and size. The bigger the dot, the more expensive the house and homes of similar size share the same color. This kind of information is relatively simple to map, but Stamen has opted to create a dense and complex image by exaggerating the scaling of the dots in relation to the cost of the property. Because the inflated size of the dots often swallows several properties, the designers turn the centers of the dots transparent so we can see when they are stacked or overlapping. This makes the map less legible. So What? The aesthetic impression the work leaves in the mind of the viewer has its own value.

History Flow by Hint.Fm http://hint.fm/projects/historyflow/ is informationally dense and expressively complex. It not only invites, it requires, investigation to decipher. “The colorful history flow diagrams take a lengthy edit history and turn it into a picture. The image above, for instance, shows the history of the Wikipedia article on chocolate. What jumps out? The zigzag pattern at the right. It turns out that this is an argument over whether at certain type of surrealist sculpture exists or not.”

Data Art sits at the far end of the spectrum, where function is no longer the prime directive. Aesthetic qualities take priority over utilitarian concerns. Data Art does not have an obligation to provide useful conclusions. Art is not expected to ‘tell the truth’ in an objective way. Though certainly it can. More often Data Art’s subjectivity obscures it utility. 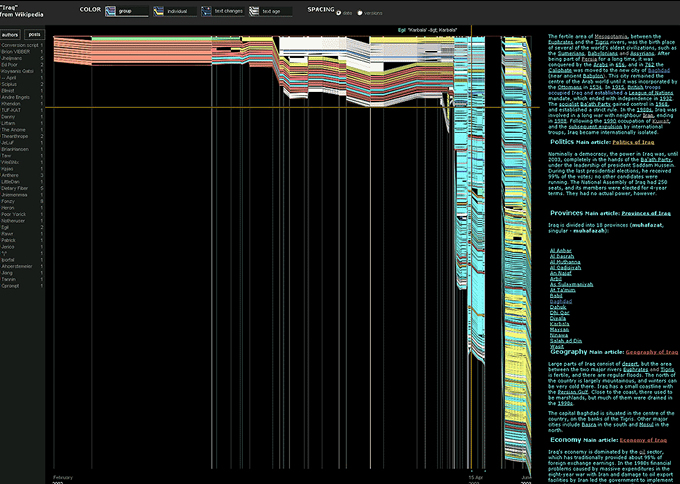 Data Art is no different than any other type of art in that it creates a world rather than accurately represents the world. There is an extremely loose fit between the data and its expression. Data Art is afforded the freedom not to be objective. There is no expectation that the visual form of the data will be used as a tool to enhance our understanding of the data set. What is sacrificed in terms of clarifying the quantitative data is made up by the emotional resonance of the work. An info-graphic on world hunger has an obligation to stick to the facts. A work of data art manipulates the facts to make its point aesthetically, emotionally, experientially

Southern Ocean Studies by Reconnoitre – http://www.reconnoitre.net/bas/index.php combines real time information on the water currents around Antarctica with other sources of data to create a complex hydraulic system of capillary action and cellular flow. “Whilst respecting the underlying science, the work seeks to develop a sensibility to the dynamics of ecological complexity as pattern and felt experience rather than quantity and measure. In doing so we hope to articulate an aesthetic of system-ness – a metonym for the interconnected forces operative within ecosphere to which lived human behavior contributes and is a part.” (http://www.reconnoitre.net/bas/index.php)

Unlike an info graphic of a data visualization, the objective information is cannibalized for the artists own purpose. There is no clear conclusion to be drawn from the data. Ambiguity is cultivated. What we are left with is an impression, an experience, a feeling of swirling eddies and whirlpools. We take away an impression of the motion dynamics of the water. 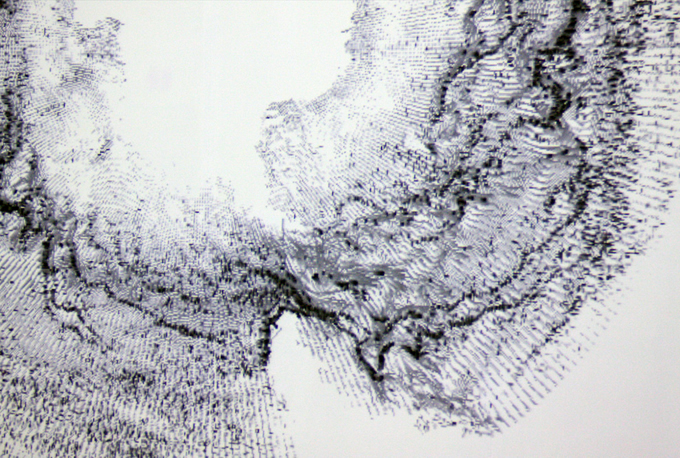 Data Art can treat data like a raw material in the same way that a painter uses paint. Computer Code moves the colors rather than a paint brush. ReallySimpleSeeds by Lanvideosource http://vimeo.com/939779 is a generative art work that that is seeded with data to grow an audiovisual mediascape that has a life of its own.

“[A] Video patch extracts and compares words taken from three news websites (italian, european and global). [The] Structure created interacts in real-time with audio frequencies and is partially sequenced. Video patch sends back triggers…generating
audio-video interaction feedbacks. Words extracted and decontextualized are constantly remixed in the patch, obtaining new meanings or creating a kind of subliminal messages…making it in part unpredictable.” (Lanvideosource)

Hint.fm http://hint.fm/projects/flickr/, a collaboration of Fernanda Viégas and Martin Wattenberg, carefully cultivates their data – photos of the Boston Commons – to create ‘Flickr Flow’. “Our software calculated the relative proportions of different colors seen in photos taken in each month of the year, and plotted them on a wheel.” The data is curated by the artist, rather than sampled objectively. Photographs of the Boston Common that do not have the ‘right’ color properties are ignored. The image processing code was written to create a specific aesthetic effect rather than reflect reality. 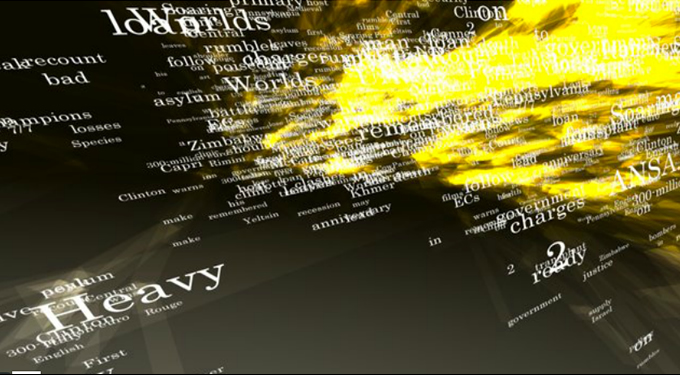 Its often heard in the lecture halls of media and technology festival, that ‘Data is the new Oil’. By this they mean that it is a valuable commodity that can be consumed, sold, or traded. But the costs to acquire and process data in comparison to oil are like night and day. Everyone produces data. Very few people produce oil. David McCandles puts a spin on the phrase when he says, “Data is the new soil”, loading his metaphor with connotations of productive growth and fertility, rather than oil derricks and black smoke.

Regardless of the metaphor, the point is the same: we are surrounded by data, producing and consuming it at an accelerating pace. And like anything of consequence in our society, it is the role of designers and artists to interrogate the data in our lives, examining its use, abuse, and aesthetic potential.