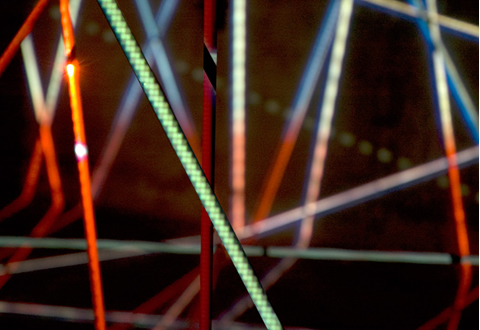 Daniel Canogar has exhibited widely in Spain and throughout Europe and is perhaps best known for his sculptural projections that use light and fiber optic cables to evoke modern phantasmagoria. Much of Canogar’s practice is informed by the tradition of the readymade and he frequently raids dumpsters and sources materials from garbage heaps near his studio in Madrid to create his photography, sculpture, and installations.

Using discarded DVDs, VHS tapes, computer parts, lenses, light bulbs, telephone wires, and modem cables, the works on view in Trace are built on the history of the nouveau réalistes’ overt appropriation of reality into their practice. Recalling both Jacques de la Villeglé’s ripped film posters and Arman’s Poubelles series constructed of collected trash, Canogar examines the vestiges of our obsolete and discarded technologies and reanimates them to reveal new meaning.

Dial M for Murder is an elaborate network of tape ripped from a VHS copy of Alfred Hitchcock’s eponymous film. Forming a latticework of crisscrossed lines spreading across the gallery, a video animation is precisely aimed at these radiating geometries and appears to constantly move along the tape, much as the head in the VCR would have done. A living system also becomes apparent, the animation spiriting a vital narrative forward, evoking a pumping heart, veins and arteries. Reviving this celluloid artifact to dramatic effect, the animation was inspired by Saul Bass’ credits for Hitchcock’s films, as well as the filmmaker’s sawtoothed suspense plots.

Exploring the short life expectancy of the technologies we cast off, Spin is comprised of the copied contents of 100 discarded DVDs that are projected back onto their surface, revealing the moving images trapped within the discs. Due to the DVDs’ mirrored surfaces, the projections are reflected onto the opposite wall, creating an abstract double of the films. By layering the different soundtracks of the DVDs, an acoustic cacophony rises and subsides throughout the video loop. Turning Benjamin’s notion of the work of art in the age of mechanic reproduction on its head, these distinctly utopian cosmologies brim with kinetic energy. 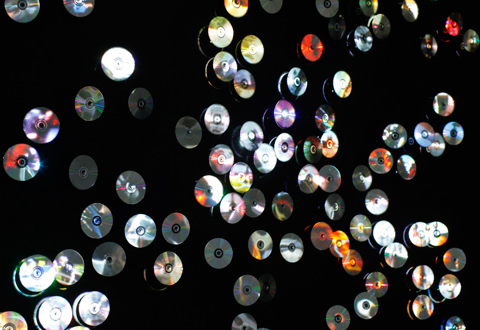 Daniel Canogar uses discarded electronic materials in his photography, video, sculpture and installations, which construct portraits of a society and an age. Finding inspiration in the archeology of new media, Canogar brings the dead back to life, revealing their contained secrets. Constelaciones (Constellations), the artist’s first major permanent installation, is the largest photo-mosaic ever realized in Europe. Inaugurated in September 2010, the mosaic lines the arching concrete cover of two new pedestrian bridges crossing the Manzanares River in Madrid.

Neighbors from the two communities that the bridges have brought together appear floating above the pedestrians crossing the bridge. Other recent public commissions include a large installation for the American Museum of Natural History in New York that will be completed November 2010; Travesías, a large-scale art installation for the European Parliament’s atrium in Brussels; a permanent photographic mural in the A rensa Train Station in Naples, Italy; a public projection on Rio de Janeiro’s landmark, Arcos da Lapa; as well as video projections on Madrid’s Puerta de Alcalá monument and Rome´s church of San Pietro in Montorio for the Nuit Blanche festival of these cities.