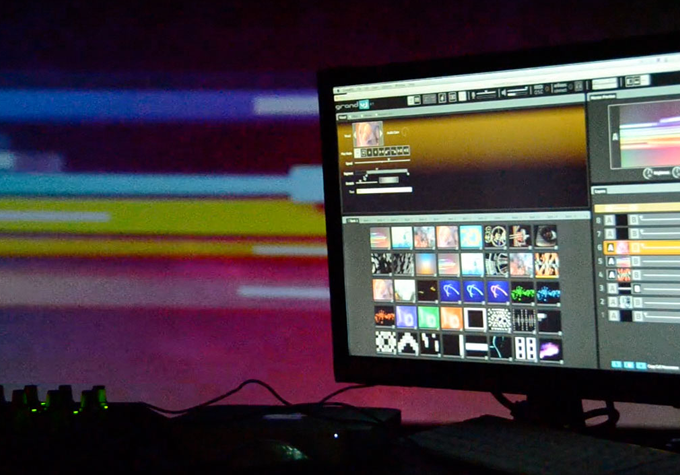 The adventure into theoretical reflection on VJing is something of this new millenium. A first approach into writing about the practice of playing visuals live was took by the artists themselves. The central focus of their texts was related to their own experience in the production of events and on the investigation of the historical roots of live manipulation of visual with sound [1].

Gradually, around 2005, a new approach started to emerge. Publications covered wider interests andr themes, such as identity, time-space and aesthetics. They defined VJing in a multitude of connections and differentiations with other live audiovisual practices, especially with live cinema [2]. Those involved in this new publications included, besides artists, who have been always interested in theoretical reflection (at least some), also curators, organizers and theoreticians [3] among other elements of the community related to live audiovisual performance. These publications contributed to the growth and diversification of the discourses. The process of writing, grounded into the practice, is combined with academic research, artistic studies and critics [4].

This is where the book Dancing Images (Utrecht University, 2014, http://dspace.library.uu.nl/handle/1874/294621) by Marina Turco comes in. Marina Turco has an academic background in art history and she has been an active element of the audience for more than ten years (http://www.uu.nl/staff/MTurco/0). Besides being registering her experiences in many events and festivals, her activities within VJing also include curating and writing. 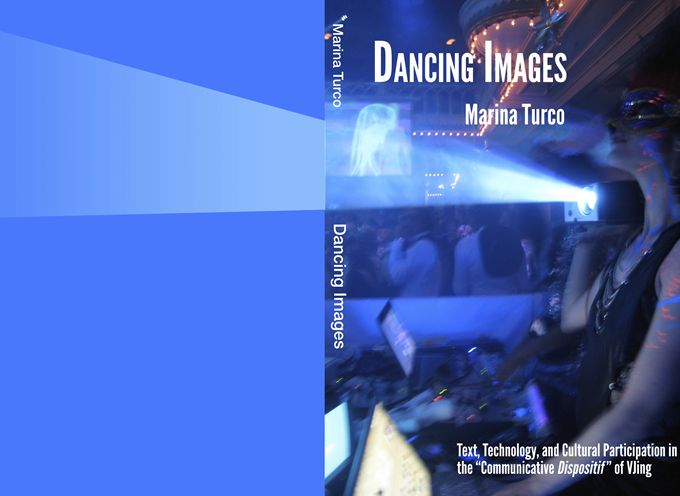 Dancing Images results for the research and analysis of the registered experiences and further theorization. Central to the argument is a triptic structure, an interpretative grid that permits understanding VJing as a dynamic and complex cultural practice.

Ana Carvalho: What took you from being an interested part of the audience to the study of VJing as a cultural aesthetical practice, which started to emerge at the end of past century, maintaining itself for most of this time related to subcultures or diluted with other artistic practices, and what are the difficulties of its study given the lack of traces?

Marina Turco: As I explain in the introduction to the book, it was not just the fascination for the experience of dancing with visuals that inspired this research project; it was the intuition that this practice implies very complex and deep relationships with all kinds of contemporary cultural forms and phenomena, despite its entertaining function and the apparent “easiness” of forms and working methods. The fact that it was not easy [5] to define its nature, to catalogue its forms and to interpret its textual developments throughout the party made me curious about the “hidden links”, both in the cultural dynamics of the art form and in the textual mechanisms of the single live set.

Those two aspects – the social and the semiotic – are strictly related: the way a dance scene values and configures styles, for instance, affects the way a VJ gives form to his/her own style and techniques. That is something that a spectator perceives, unconsciously… dancers are able to appreciate when a set fits the scene, the event and their personal taste. A spectator feels the “vibe”, but it is not easy to unveil the many intersecting threads that produced that perfect dispositif. In order to do that, you need to go back to the event and analyse it, reflect on your own perceptions and reactions. In this respect only is it necessary and useful to have some kind of audiovisual recordings. In VJing, the video mix alone is meaningless, but if you have been at the party by watching back the recordings you discover and unravel those associations, resonances and logical threads between the music, the video and the dances that made that set beautiful, cool and interesting. 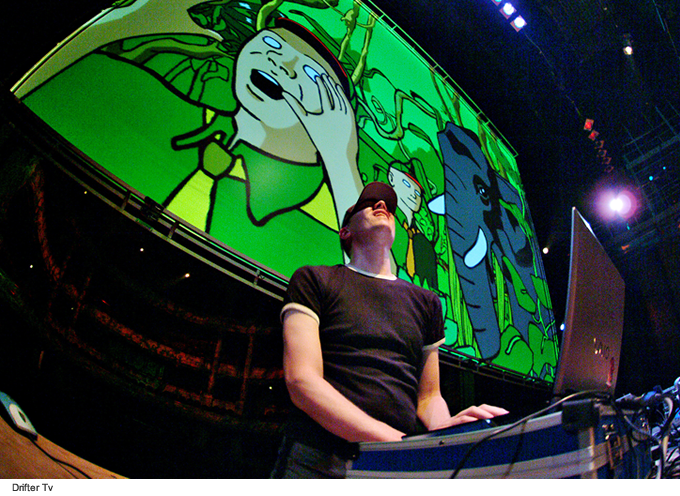 Ana Carvalho: The interpretative grid you defined in your book can be applied to the practice as a whole, in the construction of a general dynamic definition as well as to a performance or to the work of an artist in the understanding of how it relates to the practice. Would you agree? Could you describe a bit further how it related to the practices of VJing?

Marina Turco: The complex relationships between VJing and contemporary culture I was talking about, ground the whole interpretative process. Therefore I have chosen to start each chapter with a broad theoretical introduction rather than with the party analysis, which comes in the final section of the three main chapters. The theoretical introduction defines how experience and communication is shaped by three basic orientations, or modes: the subjectivating, the normativating and the objectivating orientation. This basic philosophical distinction is at the core of many religious and philosophical movements, in opposition to the dualistic, oppositional kind of reading of experience and communication.

This choice is also due to the fact that VJing is not easily defined in oppositional terms: it is not art “or” entertainment, linear “or” rhizomatic, modern “or” postmodern; it is both bookends simultaneously. In the triadic approach, the aesthetic, the normative (the set of style norms that characterise a scene/club/VJ set) and the logical (the programmed, algorithmic functioning of communication and technology) are not opposite to each other’s, but complementary. I show for instance, that the reflective function of aesthetic processes, the unsettling effect of art experiences, rely on knowledge of contextual norms and logical processes: you cannot break the rule if you do not know it first.

The way VJ-programmers (Lia, Geert Mul, etc.) use algorithms to create art is another splendid example of their deep understanding of technological and phenomenological processes: the future can be predicted only to a certain extent; algorithms are used to set up pre-programmed sequences, which, like any other logical structure, may have to be changed on a whim to adapt to the uniqueness of the here and now. Moreover, the same “algorithmically produced” video mix produces many different messages as each spectator interprets it within the frame of his/her cultural set of norms and values and his/her affective dimension: this is the interesting part for the VJ. After understanding this triadic principle, it is possible to read the party stories in a more “empathic”, less didactic way: each of them focuses on one “mode”, but all convey a feeling of the harmonious dance between frames, emotions, and interpretations. Of course, you could start reading the text from those stories and go back to the theory afterwards… they certainly are the most entertaining part of the book! 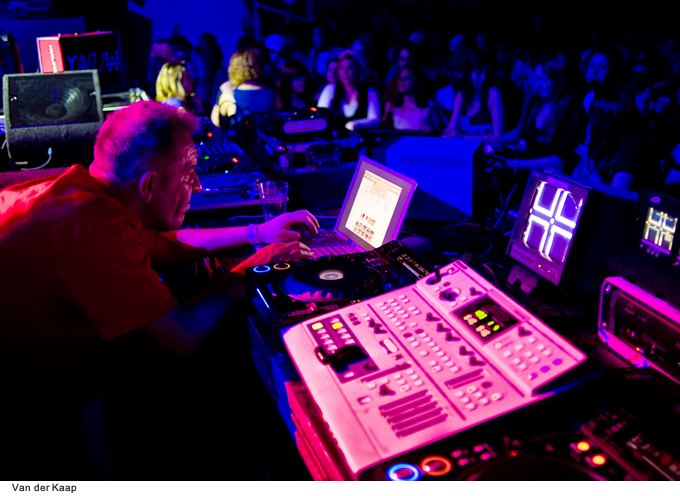 Ana Carvalho: VJs way of thinking is closely related with the technology as extension of their thoughts because triggering an image often has to be almost as quick as the thought of it. The development of an intuitive use of technology is therefore fundamental as much as a sense of working with others, being them artists, technicians, video makers or writers. If I am allowed this request, I would like to ask from you a speculative exercise of imagining a possible future based on the features that are particular to a VJ.

Marina Turco: I can think about a range of fields where the live visualist’s mind setting would help renewing culture and society in a positive way. One of them is education. The awareness that technology is an instrument that can be “jockeyed” for a number of human purposes can free us from those scary – elating to some – visions of a world dominated by AI, big data (the normative) or algorithms (the objective). VJs know their tools and contents, they can program a great deal of the audience reaction, but they also know that their field of action is broader than their own profession: they do not aim at manipulating the audiences; they aim at fulfilling their needs.

Live performers are masters at changing and learning, following the flow (that is, the needs and struggles of individuals and society at large). It is the combination of many systems – economic, social, cultural – and the ecology of the single human being that makes the result, in art as in life in general. The dominating vision of current political, educational, financial systems that read and construct reality as being uniform, standardized, completely measurable, is not a natural consequence of the adoption of digital technologies, it is a cultural/political choice. Measuring intelligence and cognition (in education) or profit (in finance) according to standardised parameters and letting the algorithms “draw conclusions” at large scale (international ranking systems determine educational as well as financial policies) increases efficiency only to a certain extent. Pushed to the extremes, it becomes a “control freak” kind of dictatorship. We have seen where this view has brought us in the financial world. I ask myself if a VJ would embrace such a vision. There was this idea, for instance, of finding the algorithm that would produce the perfect (read bestselling) movie.

This idea has always been at the core of commercial cinema, and now it is possible to improve the formulas by means of big data. But the fact stays, that a mainstream formula can be exploited only to a certain extent, to the point when a single innovative movie changes the rules and the logics of film making entirely. Big data may change the capacity of making profit and its duration (and I am not really sure about this neither) but not the nature of things. As Gerald van der Kaap said: “This footage here, I wouldn’t show it in a club. Or perhaps, just because I would not, I should do it! “. This is the humanistic mind setting of the VJ, his formula for producing the perfect set. Total freedom, being in the flow, adaptation and discovery. Ana, you told me once about your interest in the notion of flow, so I tell you what my next reading will be: Mihaly Csikszentmihalyi’s book Creativity: Flow and the Psychology of Discovery and Invention. 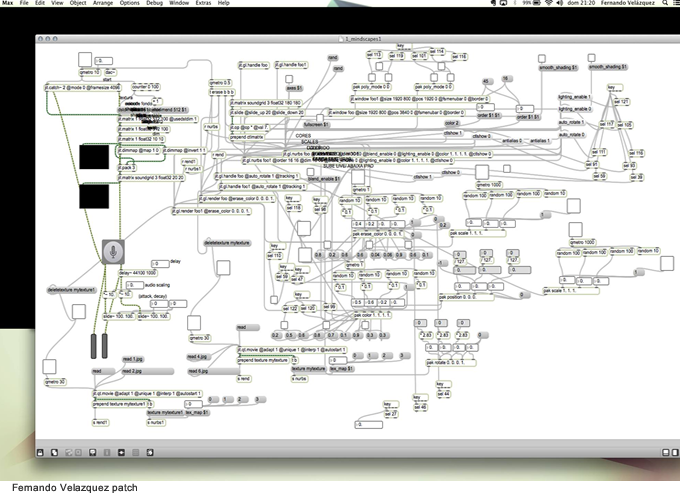 Ana Carvalho: Where can your book be found for purchase?

Marina Turco: The Utrecht University Library makes the thesis available both in the Netherlands and abroad through Igitur, the electronic publishing and archiving services of Utrecht University [6]. I am also working on a commercial version of the book, more compact and with a better layout. Recordings of the VJ sets that are analysed in the text are on my Vimeo [7] and YouTube [8] accounts.

[2] Such as VJamm theory (2009), a collective writing organized by VJ Theory and the number of AMinima magazine on Live Cinema (2009) edited by Mia Makela.

[3] The Rise of the VJ, edited by Carrie Gates an issue of the online magazine Vague Terrain is a good example as well as some of the contributions in See the Sound Audiovisuology and Visual.Music by Cornelia.

[5] It is still not easy, see the number of publications that are dedicated to the definition of this practice also in relation with the neighbouring practices.

[6] Research for publications at Utrecht University: http://www.uu.nl/university/library/EN/Pages/searching_for_literature.aspx. Link to the book for download: http://dspace.library.uu.nl/handle/1874/294621