Crude Golden Age. A comment about “The Green and Pleasant Land” by Max Colson

The floor of the gallery is conveniently covered by plastic bright green grass over which blue and white pillows have been placed to accommodate visitors. Once you make yourself comfortable, big monitors next to you show 3D rotating renderings of trees and country animals while a hypnotizing video is projected on a large white surface.

The air is filled with a monotone robotic voice rattling off comments about British landscape – an ideal world where only green hills and quiet cows find space, according to such a collection of descriptions taken from social media discussions. An invisible hand search pictures of English romantic painters on Google and place crude 3D renderings of trees, 19th Century steam trains and gothic cathedrals on a raw depiction of how the British islands look like from the sky.

This is the bold display of the new work by artist Max Colson, The Green and Pleasant Land (2017), that will be on display at Arebyte gallery (Hackney Wick, London) until December 21st. The post-Brexit phase brought many UK-based artists to question the concept of national pride and shared narrative identities; how do political parties use stereotypes about their own country in order to gain power and followers? 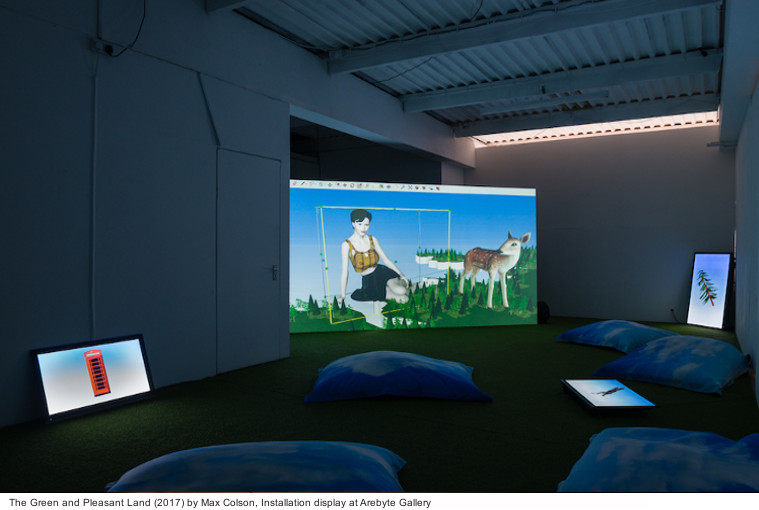 The wonders of pastoral life have been praised by hundreds of Western poets, novelists and visual artists throughout the history in all those communities that retired from country life to live in cities. Hesiod (750-650 BCE) was the most famous Greek poet that formulated the idea of a golden age when people lived together in harmony with nature and its fruits, a concept that exercised power in obvious and unexpected ways on the shaping of lands and urban environments all over the world.

The influence that such a vision exerted on British history plays a unique role because of British Empire’s aggressive colonial system that inoculated its values into subjected cultures’ ideological and political frameworks. In other words, colonialism made the green meadows of Essex or Surrey the social and aesthetic ideal for people living far away from England, depreciating every place that couldn’t fit within this specific bucolic imagery.

The pervasiveness of such aesthetic values can be appreciated by the fact that the stereotypical British landscape is not Scottish, nor Welsh or Irish but first and foremost English. John Constable (1776-1837)’s works recur in Max Colson’s video and the feeling is that it can’t be otherwise. 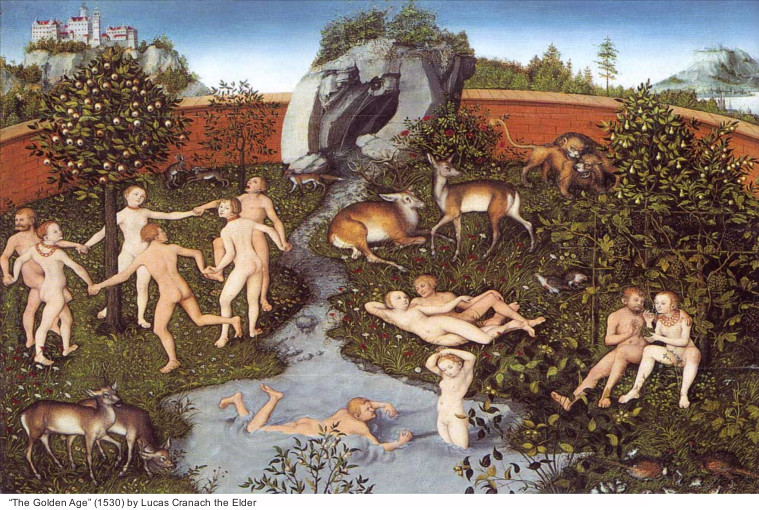 Constable is the English artist that more than anyone invented the English landscape with its unique features – blue skies are crossed by flamboyant white clouds while green lands look fit to be shaped by human hand. The few people inhabiting Constable paintings are coming back from villages’ markets, floating on quiet rivulets and looking amazed at gothic cathedrals hidden in the woods.

Although the calm mood of his most famous works, the communities he depicts are going through a traumatic historical stage. The Great Britain was becoming an economic and industrial world power – its green meadows were reshaped to make more profit and blue rivers were adapted to host bigger boats.

The landscapes painted by Constable don’t just record the vanishing of a set of bucolic values in need of being protected but also the echoes of what made unique the English landscape at the eyes of a British Empire citizen in opposition to other countries’. Such a patriotic perception of land can be handled by political agendas with opposite goals; a conservative party suggests to turn the back to the promise of a hyperconnected planet and embrace traditional values while a progressist stand would find in those green hills the utopian premise to reach in the future. 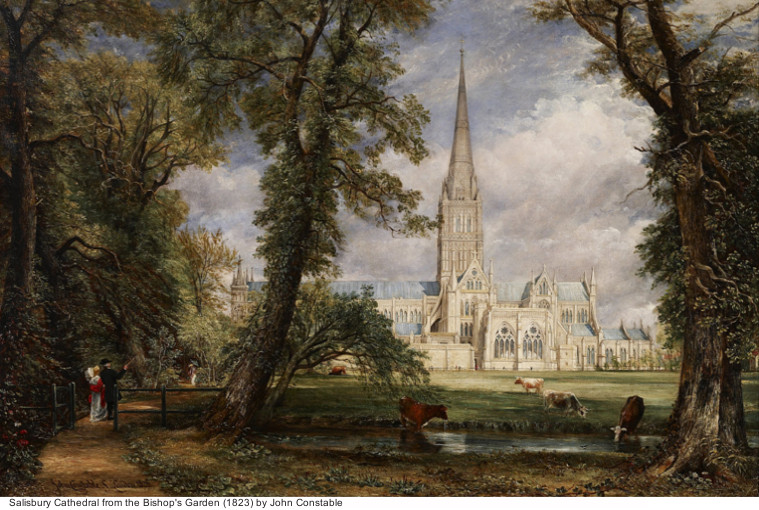 To quote more poetic words, William Morris used to claim that “we shall not be happy unless we live like good animals unless we enjoy the exercise of the ordinary functions of life: eating, sleeping, loving, walking, running, swimming, riding, sailing”.

Green hills and fluffy white sheep embody the idea of going back to essentiality and simplicity, two concepts that play a pivotal role in Max Colson’s work. The artist removes everything that would embellish the final result choosing to take a detached stand, becoming an observer and collector of opinions.

The primitive shapes of which are made the figures placed by Max Colson on the virtual green table recall this accommodating interpretation of a featureless natural world – a lack that allows anyone to handle it in reason of any political agenda.

The voice that reads the online comments is neutral to the same degree; it can’t be recognized or even be remembered as much as the texts selected by the artist, generic in their way of describing places shaped by hands and minds of national and foreign poets and artists over centuries. 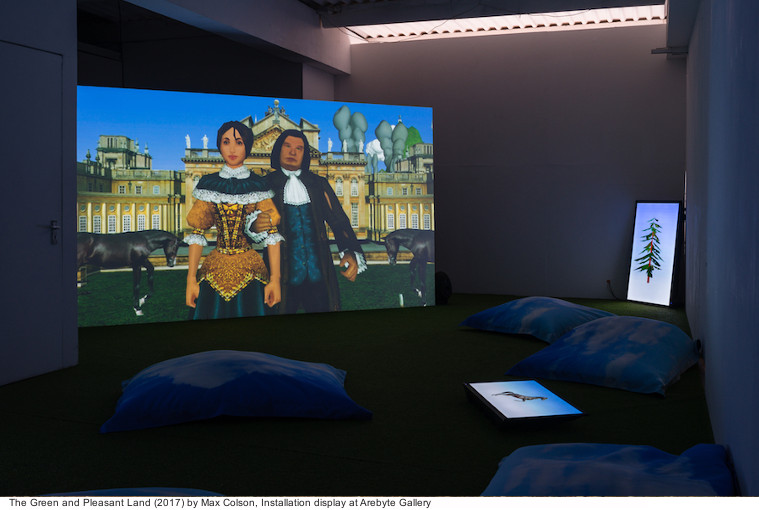 The British Islands stand on a blue background, more flying than floating on it. It’s a restricted world made of generic attributes in the same way a Lego set or a Minecraft Youtube experiment can be. The question that such a situation seems to ask is about isolationism – is it a kind of protectionist policy act to defend uniqueness or a self-harming action that simplify its own special features until they become just figures of speech to employ as political tools?