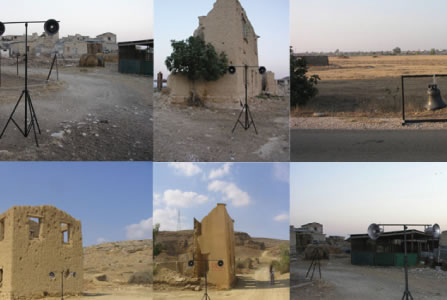 CrossMediale 1 is an international exhibition focusing on new media art. The concept of the installation of this show allows the viewer to move freely between artworks produced in vr, photography, and video, amid images derived from quantum mechanics, cosmology, computer programming, and fractal geometry as exemplified by the encaustic on wood pieces by New York artist Richard Purdy. Artworks included in this exhibition traverse media and concepts.

Erik Olofsen, and Toshihiro Komatsu display photographs. Dutch artist Erik Olofsen presents Mugshot photo as well as Shift, a video installation consisting of a double video projection of wooden shapes gliding over and past each other like drifting continents. The projections touch, causing the images to move from and towards one another. Sometimes both projections fall into the fold and create a new entity. The blank spacesthe emptiness in betweenbecome as tangible as the saw-toothed wooden forms. The scale and perspective transform, hinting at geopolitical shifts.

UBERMORGEN presents the ART FID (2005) painting series, featuring digital prints on canvas, which portray, magnified on a monochrome background, the structure of round RFID chips. UBERMORGEN.COMs focus on the pixel as the molecule and technology as a hidden demon relates also to the technology industries newest gadgets — RFID (Radio Frequency Identification) chips are one of the leading technologies of the future: an identification system that can collect diverse information about the products it is attached to as well as the person that has made purchase of the product. The ART FID series was shown for the first time during ART 36 Basel, announced by a press release a media hack in pure.

Special events include YOU ARE HERE, Pure Data & GEM projection by Drew Browning and Annette Barbier onto the outside of the gallery building at the 4th floor level and visible from the Kennedy Expressway (Interstate 94), near exit 46B. Further, two electro-audio-visual performances by La Bande Sans Fin, a Chicago based multimedia artistic team formed by David Zerlin and David Blum, will take place.